You are here: Home / News and Articles / Character Breakdown for The Inhumans TV Show Revealed 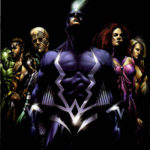 After a dry spell on news about Marvel’s The Inhumans, due to air this September, there has been another flurry of information about the show. Recently, ThatHashTagShow.com received a tip about a casting call for the series. It’s pretty clear that Marvel tried to disguise who each character was supposed to be by giving them names such as “Marty” and “Broderick”, but this list confirms that all our favorite Royals are set to be cast in the main series.  No word yet if Lockjaw, the Royals’ teleporting dog, is set to appear in the series.

Something interesting to note: For a majority of the roles, they are looking for actors and actresses between the ages of 30-40, with the exception of Crystal, who they want someone 18-25 for. For anyone who was wondering about the age difference between the two sisters, this pretty much confirms that it’s going to be at least 5-10 years.