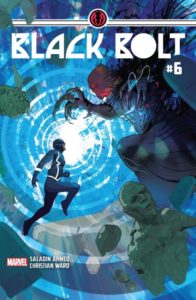 The first arc of  Saladin Ahmed and Christian Ward’s tremendous Black Bolt comes to its conclusion and it’s an absolute triumph.

The story up to this point has seen Black Bolt stranded in a mysterious space prison, lorded over by a cruel Jailer who seemed to posses the powers of a god.  Black Bolt had made allies among his fellow inmates, including Crusher Creel, The Absorbing Man as well as a Skrull pirate queen named Ravva, Molyb the Metal Master and a telepathic alien child known only as ‘Blinky.’  Black Bolt had managed to escape this terrible prison with the aide of his teleporting dog, Lockjaw, and the one-time king of The Inhumans chose to return to the jail to free his friends and put an end to the Jailer’s sadistic reign.

As Black Bolt and his comrades ventured deeper into the prison, fending off its security drones, they came to learn that The Jailer was once an inmate himself.  He is an ancient Inhuman who possesses terrible psychic powers that made him like a vampire needing to feed off of the emotional suffering of others.  This being had been captured and incarcerated in the space prison, yet he was somehow able to free himself and destroy his jailers, taking their place as the new warden and using the prison as a veritable buffet wherein a constant stream of new inmates quenched his insatiable hunger for suffering.

This Jailer has long since lost his physical form and now exists as a physic energy bound only to the last remnants of his body dissected and incased in jars and tubes.  It would appear that The Jailer is a master of psychic illusion and the various deaths and sufferings that Black Bolt and the others have endured may have all just been telepathic tricks meant to provoke anguish for the Jailer to feed on.

Black Bolt and the others are intent on ending the Jailer but this monster is not going down without a fight.  He has manifested ghosts from the minds of his attackers, acting to cripple them with terrible feelings of guilt and sadness.   Black Bolt has used his powers of molecular manipulation to project a protective shield around him and his comrades, neutralizing the power dampeners and offering others full use of their super powers.

Blinky’s telepathy allows her to see through the Jailer’s illusions and she encourages the others that these ghost are not real.  Black Bolt, Creel and Ravva are able to see through the illusion, but Molyb is not.  He has been in this jail much longer than the others, his guilt is too deeply seated and he cannot disabuse himself of the Jailer’s psychic manipulation.  He begins to turn on the others and Ravva sees no other choice than to stop Molyb herself, stabbing him through the back with her sword.

The others are shocked by the Skrull’s gruesome resolve, but there isn’t time to pause nor grieve; they must move forward.  They travel deeper into the heart of the prison where The Jailer lays in wait.  They engage him and Jailer cuts loose with the full extent of his powers.  This power creates an impenetrable shield and it take all that Black Bolt has to maintain his own shield and protect the others.

He knows that he can only contain this energy for a moment, that it will result in his own destruction and he asks that Black Bolt seek out his wife and let her know that he never abandoned her and will always love her.  And with this, Creel leaps headfirst into the Jailer’s being resulting in a terrible explosion.  Black Bolt uses everything he has to protect himself and the others from the detonation.

He awakes some time later and knows that the terror has past.  The Jailer has been killed and the prison destroyed; what is left of the inmates have all fled.  It turns out that Molyb’s alien physiology allowed him to survive being stabbed and he, Blinky and Ravva help Black Bot to his feet.  The happiness of their reunion marred by the sad truth that their freedom has come at the expense of Creel’s sacrifice.

Molyb and Ravva depart, returning to the lives they had prior to their incarceration, leaving Black Bolt and Blinky behind.  The effort Black Bolt had exerted in the battle with The Jailer has taken a drastic tole on his powers.  These powers have been halved, perhaps permanently, and Black Bolt can sense that his voice no longer possesses the highly destructive properties it once had.  Before Black Bolt can despair in this realization however he is overjoyed by the sudden reappearance of his loyal fried, Lockjaw.

Lockjaw can take Black Bolt home and Blinky is ready to say goodbye, ladened that she has no where herself to go.  She asks if Black Bolt might take her with him.  It is a lot to ask and Black Bolt is taken aback by the request.  He has been such a terrible father to his own son, Ahura, the prospect of taking on this duty for Blinky seems to fill him with apprehension.  Yet he seems to no there is no choice to be made.  Of course he will take Blinky with him.

Black Bolt is not the same man who first entered this prison; he has been changed by the experience.  The old Black Bolt might have turned his back on Blinky, thinking only of the needs of his own people.  But he is no longer that man and he pauses for only a moment before accepting Blinky into his care.  And it is here on this warm and optimistic note that the first (hopefully the first of many) arc of Ahmed and Ward’s series comes to an end.

What a ride!  This six issue arc embodies everything I love about comics in general and The Inhumans in particular.  The ideas are huge and wild and fun, with the high concept weirdness ballasted in deep, fully fleshed out character studies.  The story and art is synched up hand-in-glove with both sides of the comic lining up so seamlessly that the narrative and art finish each others sentences.  One would think Ahmed and Ward had been working together for years.

Although Black Bolt was advertised as a solo book, the extended cast that Ahmed and Ward created played a pivotal role in the first arc.  Black Bolt has felt more like a team book with the other cast members (especially Creel and Blinky) being just as important to the story as Black Bolt himself.  And I feel that this was a very good decision.  Black Bolt is a festinating character in the context of The Inhumans as a whole, but has been a bit shallow in terms of standing on his own.  His inability to speak coupled with the cold, withholding fashion in which he comported himself has left Black Bolt as someone who is quite hard to relate to.  Ahmed and Ward chose to reintroduce Black Bolt to us by way of his relationships to the extended cast.  The juxtaposition has generated a new avenue for exploring who Black Bolt is and how his feelings and attitudes have been shaped by all that he has gone through.  The interplay between Black Bolt and the rest of the cast allows us to get to know him in a fashion that hasn’t been done before and has made Black Bolt a much more fully realized and dimensional character.

That street has gone both ways in terms of both Blinky and Crusher Creel.  Creel in particular was made into a wonderfully sympathetic character.  It was sad to see him die in the end, although I doubt this ‘death’ will prove a permanent condition.  Creel has survived similar such deaths in the past and it likely won’t be too long before The Absorbing Man reappears somewhere else.  Still, it’s sad to see him die here just in that Ahmed does such a great job writing him and I’m left wanting more.

Blinky is someone we will likely get to learn more about in the next story.  So far she is just great fun and absolutely adorable.  Putting Black Bolt in a position where he is forth to act in a parental fashion was both an unexpected and hugely satisfying decision.

Alright! no more gushing!  I loved this book and loved this arc.  I’m psyched that the trade paperback will likely be released around the holidays; it’s going to be a gift I plan on giving to all my friends and family who enjoy comics and science fiction.

Five out of Five Lockjaws for the issue…

…and an impossible Six out of Five Lockjaws for the six-issue arc itself!