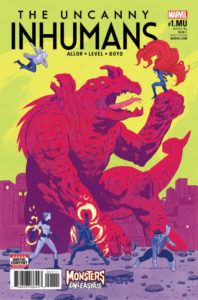 Captain Swain and the Uncanny Inhumans star in this one-shot tie-in to the Monster Unleashed Event from the creative team of Paul Allor, Brian Level and Jordan Boyd, with a neat throw-back cover from Gustavo Duarte and Michael Walsh.

Monsters have invaded the Marvel Universe!  No one has yet been able to ascertain where these giant creatures known as ‘Leviathans’ have come from, why these have come, or what they want… mostly because all of the heroes have been all too busy fighting these monsters off all over the globe, desperately trying to push back the tide and save the countless innocent people threatened by these rampaging beasts.

The answers behind the onslaught of these Leviathans will ultimately be addressed in the pages of the main Monster Unleashed book, while this issue focuses on a team of Inhumans and their efforts to repel a pair of monsters attacking Rome and save a group of civilians who were left behind in the initial evacuation of the city.

Medusa, Karnak, Inferno, Triton and The Human Torch battle the Leviathans while Swain and Crystal attempt to evacuate a group of civilians in a New Attilan skyboat.  One of the two monster notices the escaping skyboat and gives chase, trying to bat it from the sky.  Piloting the craft, Swain attempts to utilize her empathic telepathy to ‘nudge’ the leviathan, dissuade it from its pursuit.  It doesn’t work and Swain is distracted by the bizarre, alien nature of the monster’s mind.  The skyboat is swatted from the sky and crash-lands in a forested area of the Italian coastline.

Meanwhile, Karnak is finally able to detect the other leviathan’s key point of weakness; he directs Medusa and The Torch to concentrate their attacks to exploit this weakness.   The monster is destroyed and The Inhumans quickly depart in search of their fallen allies.

Following the crash, Crystal receives a severe blow to the head, leaving her concussed and barely conscious.  Swain must take charge and corrals the civilians into a cave, hoping to escape the leviathan.

All the while, Swain attempts to use her empathic powers to connect with the monster’s strange and savage mind.  She succeeds for a brief time and is able to keep the creature away.

The exact nature of how Swain’s Inhuman powers work has yet to be fully explained.  Unlike a standard telepath, Swain’s psychic abilities are more affect oriented… she can read and influence another’s emotional experience.  And it turns out that this ability is not completely unilateral, rather it can act as a two-way street.  Swain is able to calm the leviathan, curb its furious bloodlust, but in the exchange Swain herself is effected, overwhelmed by primal and savage feelings of the monster.

The shock of it all breaks her concentration and once again the leviathan is on the attack.  Struggling to control her own monstrous feelings, Swain continues to lead the escape.  The cavern opens up to the face of a cliff and in a final confrontation, Swain is able to overpower the leviathan’s mind, causing it to leap from the cliff and fall to its doom.

Yet Swain is left significantly infected with the monster’s bloodthirsty mentality.  When the other inhumans finally catch up with them Swain lashes out and attacks Inferno.  Karnak steps in and delivers a swift chop to a nerve cluster that renders Swain unconscious.

The narrative leaps forward, back to The RIV where Swain is convalescing following the ordeal.  Crystal comes to visit her, expressing her thanks for saving her life and lauding the great heroism and leadership that she demonstrated.  Swain does not feel she deserves the approbation.

Swain feels that she let the leviathan get inside her head, let it get the best of her and unloose a more beastly and savage side of her.  She is still infected by the monstrous feelings that she had come into contact with inside the leviathan’s head.  Crystal assures her that it will all soon pass; that she will eventually make a full recovery.  Crystal adds that she is very proud of her.  And it is here that the one-shot comes to an end.

A not especially necessary but nonetheless fun read.  The Monsters Unleashed event thus far has been much more style over substance, with lots of very cool drawings of great looking monsters, but not much in the way of plot.  As a one-shot tie-in this issue doesn’t address the plot-based matter of the event and instead offers a character study of Swain and the intricate ways in which her powers work.

Swain’s powers are rather interesting.  There are a lot of psychics and telepaths among the heroes and villains of the Marvel Universe, but it’s quite uncommon for such powers to entail a bilateral reciprocation.  Swain can telepathically influence someone, yet the path can go both ways and she too can end up influenced.

In the field of psychotherapy, the term ‘vicarious traumatization’ refers to instances where a therapist comes to feel overwhelmed by the psychologically traumatic experiences of their patient.  On a psychological level, trauma can sometimes be akin to radioactivity… and discussing such matters on a deeply empathic level can often act to essentially infect the therapist with those same feelings of pain and helplessness (it’s a matter more likely to occur as a cumulative effect when a therapist has multiple patents on their caseloads who are coping with issues of trauma).

Self-care, supervision and working with their own therapist helps these councilors contend with vicarious traumatization, thus allowing them to continue being helpful and effective for their patients.  Still, it can be a substantial problem for newer or younger therapists who don’t yet realize how such exposure to another person’s trauma can impact them.

Captain Swain’s situation in this issue very much reminds me of the matter of vicarious traumatization.  She has only had her powers for a short while and is still relatively new to figuring out how they work.  She did not realize that communing with the leviathan on a psychic/emotional level could end up going both ways.  The primitive savagery of this monster is itself somewhat ‘radioactive’ and Swain ends up infected.

Empathy is a double-edged sword.  To be especially empathic is a great source of strength in that it adds to wisdom and allows one to truly understand and sympathize with others.  Yet it can also be a source of pain in that you feel what others feel and, if they are in pain, you share that pain… experiences it as your own.  A lot of people often try to suppress or side-step their own empathic feelings because it can be so tough to feel the pain and hardships that others are experiencing.

Paul Allor’s tale does a pretty good job addressing these themes with Swain, although I would have liked them to go a bit deeper.  Stand-alone stories can be tough because the economy of story and action is razor thin.  I ended up wishing there had been a bit more attention granted to Swain’s interactions with the leviathan.  Although this might just be a product of the fact that I’ve been kind of starved for seeing Swain on the page ever since All New Inhumans ended.

Swain is such a wonderful character and I’m so glad that she is getting the attention she deserves (I’m especially happy that Al Ewing shares this enthusiasm for Swain and is including her in the cast for his upcoming series, The Royals).

Brain Level and Jordan Boyd do fine work with the art.  The illustration style is not exactly to my taste, but this is merely a matter of preference.  I’m more inclined toward a clean line and an animated style, whereas Level’s artwork leans more toward a fluid, busier line.  It’s very good artwork, but, again, not in tune with my tastes.

All in all, the issue is worth checking out.  It doesn’t do anything to forward the over arching narrative of Monster Unleashed, but does a nice job of further exploring Swain’s character and examining the multifaceted nature of empathy.
Three out of Five Lockjaws.