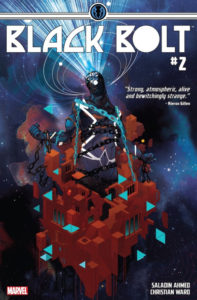 It’s the second installment of the wild, haunting and beautifully rendered adventures of the midnight king.  From the creative team of writer, Saladin Ahmed and illustrator, Christian Ward.

By way of the malicious mischief of Maximus the Mad, Black Bolt has found himself incarcerated in a bizarre cosmic prison.  Confused and alone, Black Bolt discovered that this strange realm defied the regular confines of space and time.  Its warden, a mighty creature known only as The Jailer seems to be omniscient and all powerful… complete with the ability to nullify Black Bolt;s Inhuman powers and kill and resurrect him with a whim.

As the issue begins, Black Bolt is awakened from his latest ‘death’ by his fellow inmate, a young alien girl with multiple eyes.  Her name is impossible to pronounce by human language, so everyone just calls her ‘Blinky.’   Blinky informs Black Bolt that he has been killed by the Jailer and brought back to life more times than any she has seen beforehand, suggesting something especially vigorous about BB’s constitution or (more likely) a particular animus on the part of The Jailer to torture (and possibly ‘break’) BB’s will.

Blinky is eager to show the others that Black Bolt had revived.  These others being Crusher Creel an earthly super villain known as The Absorbing Man who has tangled on many occasions with Thor as well as The Avengers, and Molyb, an extraterrestrial foe who battled The Hulk under the moniker of The Metal Master.

Black Bolt recalls that his destructive voice has been in some fashion turned off, but it still reluctant to speak. When he finally does, he expresses confusion as to how his fellow inmates had come to be here.  BB had learned of the existence of this strange prison by way of the Terrigen Codex… and it seems he had believed it a penitentiary reserved only for Inhuman criminals.  Yet Creel states that he was sent here by human law enforcement agents; Molyb was sentenced here by some alien court.

And Blinky was ushered to the prison by a sinister-sounding creep who punished her for merely stealing a few scraps to eat.

There are no answers for Black Bolt in terms of what this prison actually is, how or what enables its confines to constantly shift and reshape; nor how its warden can kill and resurrect inmates on a whim…  Creel seems to believe the Jailer does all this, kills and revives, makes people suffer and fight all merely for kicks, just as a means of scratching some sadistic itch.

Their conversation is interrupted by The Spyder.  The Spyder is an intergalactic trader and criminal who first appeared in an issue of The New Mutants.   Although an inmate himself, The Spyder has come to an accord with the Jailer, informing for him and doing his bidding in exchange for favors and privileges.

Not taking kindly to Creel’s jeering, the Spyder fires off some form of liquid filament that covers Creel’s face and begins to suffocate him.  Black Bolt intercedes, putting The Spyder into a hold and forcing him to release Creel.  The Spyder possesses some degree of control over the constantly shifting architecture of the prison, he teleports himself and Black Bolt to a kind of gladiatorial theater where BB is forced into combat with the Skrull pirate known as Raava.

A terrific battle ensues, showing off Christian Ward’s particular knack for relaying action sequences.  Black Bolt ultimately prevails, besting the Skrull in combat, but he refuses to kill her.

The Spyder is irate, insisting that BB take Raava’s life to appease the audience (which as it turns out are a series of wooden figures seated in the pews).  Again BB refuses and attacks The Spyder instead.  That same liquid filament fires forth, adhering to BB’s face, hardening and suffocates him.

Black Bolt revives some time later, Raava and Cteel standing over him.  Both have been impressed with the skill and resolve that the one time Inhuman king has shown.  They state that each had merely allowed BB to best them in combat so to test his metal and the degree he can be trusted.  He’s been found worthy and a suitable component to their plan to escape.  BB doesn’t know if he can trust these cads, but their lot seems just as bad as his own and he decides to aid them in their effort to escape.  Which is good in that the jailbreak appears to be occurring just in that moment as the walls rip open (possibly a result of The Metal Master having somehow re-obtained his magnetic powers).  And it is here that the issue ends, to be continued in the next installment.

Another truly fantastic issue!
Whereas the first issue offered artist, Christian Ward, the opportunity to flex his illustrative muscles in establishing the wild and impossible architecture of the prison, this second issue provides writer, Saladin Ahmed, the chance to quickly and very effectively build the characters of the extended cast.  Creel and Raava, the Metal Master, Blinky, even the Spyder each have their tale to tell and Ahmed gives them each such a distinctive voice, juggling the different dialects in their dialogue with deft precision.

In Ahmed’s novel, The Throne of The Crescent Moon, the protagonist, Dr. Adoulla, is very much the main character… yet it is the vibrancy of the extended cast that greatly helps to propel the narrative forward.  And it would appear Mr. Ahmed is looking to do something similar in Black Bolt, cobbling together a wild collection of colorful rogues to act as the supporting players in BB’s adventures.  And I really dig that each has been picked from some rather random corners of the Marvel Universe.

The Metal Master first appeared in an early issue of Stan Lee and Steve Ditko’s run on the Incredible Hulk; he hasn’t been seen from in years…. whereas The Spyder is from Louise Simonson and Brent Blevins’ terrific time on New Mutants, a fun but otherwise forgettable space gangster who runs afoul of The New Mutants.

And preview pages from next issues shows that The Marvel UK mainstay bounty hunter, Deaths Head will be joining the fold.  It’s a veritable whose who of esoteric and previously forgotten characters and I love it.

Raava I believe is a brand new character, but she is so quickly offered depth and intrigue she may as well be a long since pre-established figure.  Her tale of turning her back in the Skrull Empire, losing her children and becoming a feared pirate is quite well done.  The authenticity of her dialogue allows the tale to be told quickly without losing its emotional weight.

Creel is offered the same treatment and it is made clear he is a character Mr. Ahmed especially enjoys writing.  Despite all the rotten things he has done Creel still maintains something of a noble soul.  Hints of this have been shown in the past, such as an issue of John Byrne’s run on Avengers when Creel released his hostage, Sandy Hercawitz, before engaging the heroes because he didn’t want to get hurt.

He’s a bad guy, but has something of a good heart.  Perhaps Creel’s best feature is his longtime relationship with his sweetheart and fellow super villain, Titania.  The two have been the Ralph and Alice Kramden of the super powered villain sect.  Creel desperately needs to escape so to return to his woman… the idea of her not knowing where he is something he cannot stand for.
He also gets the best laughs, both in relaying a story where he used his absorbing powers to transform himself into a ginormous pile of cocaine and his hysterical reaction to learning Black Bolt’s given name…

It leaves me very much looking forward to learning more of the backstory behind the Metal Master and the adorable Blinky.

As for Black Bolt himself, it would seem that he is not entirely convinced that he does not belong incarcerated with these pirates and criminals.  He has show great valor in his time but there is also much that he regrets.  He is not really at a place to delve into his feelings on the matter, but it is likely that Creel and Raava are going to press him on the matter.  BB is no standard-issue white-hat hero, he has plenty of blood on his hands, and Creel can sense it.
What exactly BB may be feeling so guilty over remains thus far unexamined… it could be the deaths of the Mutants that led to the war wit the X-Men, the alternate realities he was forced to cull as a part of the Illuminati, his failures as a father and a husband, the deaths of his parents…

There’s a profound sadness in his eyes and heaviness on his brow.  Yet it is not the stoic heaviness of being a king that BB has so frequently shown in the past, but rather a heaviness of genuine sorrow and regret.

Once again the art by Ward is just jaw dropping. I especially like how the more static scenes are rich with fine details while the action scenes are more sparse and fluid, adding to the dynamic sense of motion.

Just loved getting to see BB engaged in an old school sword fight!

Ward plays some neat tricks with perspective, blurring objects and bringing them into focus as BB revives from one of his latest ‘deaths.’  It’s a very neat trick that highlights the overall dreamlike nature of the prison.  Such coolness!

Never did I even think to hope that such a favorite character would get his very own book; and it would be done with such skill and ingenuity and originality.  I’m over the moon with this series and cannot recommend it highly enough.
Once more, five out of five Lockjaws.