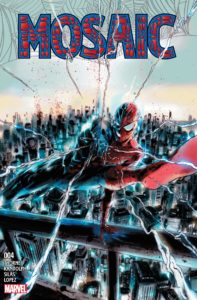 The initial chapter of Morris Sacket new, bizarre life continues on in this terrific issue from the team of Geoffrey Thorne, Khary Randolph, Thony Silas, Emilio Lopez and Andres Mossa.

Former basketball superstar and pop culture celebrity has been having a really, really bad time of late.  He has literally lost everything… his career, his fame, his fiancé, even his corporal form…  Morris’ Inhuman DNA caused him to be transformed when exposed to the Terrigen Cloud.  His physical body dissolved leaving behind a living ghost who can leap from body to body, controlling these host bodies were they his own and absorbing the individuals’ skills and knowledge.

Through this process, Morris has come to learn that much of his life was built on lies and subterfuge… falsehoods engineered by his overbearing father as a means of best cashing in on his son’s celebrity.  Morris has barely had a chance to mourn the loss of his former life before realizing that life is not especially worth mourning for.  All that he wants now is to confront his father.  Anxious to do so as fast as possible, Morris discovered the quickest means of getting uptown: hitching a ride aboard the body of The Amazing Spider-Man!

Of course this doesn’t prove as expedient as hoped for.  When Morris possesses a body he also gains access to its mind; and the mind of Spider-Man is no easy thing to take in.  All of the experiences Spidey has had, his triumphs and heartbreaks, powers and responsibilities, the vast knowledge, intellect and neuroticism, is entirely overwhelming for Morris (as well as just beautifully illustrated by Randolph, Silas and Lopez).  Throughout the series, Morris’ ventures into the minds of others has been depicted as this neat tapestry of flash memory tethered together by a web of digital synapses.  The method works especially well for Morris’s journey into the mind of Spider-Man’s and we’re treated to an amazing splash page of Morris desperately taking in this massive onslaught information.

Morris is able to borrow Spidey’s intellect to ascertain exactly what has happened to him.  He comes to realize that he is an Inhuman and that it was the process of Terrigenesis that robed him of his body and bestowed unto him these strange new powers.

Before Morris can learn more, however, he is attacked by a precession of Spider-Men, an army of Spidey’s wearing the different costumes Spider-Man has donned over the years.  It turns out that these Spider-Men are actually psychic anti-bodies attacking to fight off Morris’ invading consciousness.  Spider has had his mind controlled and his body taken over numerous times in the past and he has thus developed a sort of psychic defense against such intrusion.   First and foremost, these psychic antibodies act to protect Spidey’s identity as Peter Parker as well as the identities of the people in his life who are the most important to him.

And herein the comic offers a pretty cool fight scene where Mosaic battles the various manifestations of Spider-Man amid the way cool background of the psychic plain.

Morris has no interest in learning Spider-Man’s real identity.  He doesn’t need to know these secrets.  All he wants is to borrow Spidey’s body so he can get to his Pop’s apartment in Harlem as fast as possible.  He allows Spidey to keep his secret obscured and this causes the antibodies to relent, offering Morris full control of Spider-Man’s body.

Meanwhile, the scheming Mr. Busey of Brand Security Corp. has been slowly coming to understand the nature of what has happened to Morris Sacket.  He’s apprehended and detained a number of the individuals Morris has possessed and has put the pieces of the puzzle together, ultimately realizing that Mosaic could prove an incredible asset in the realm of corporate espionage.
Busey reports his findings to an unseen superior, someone in charge of a shadowy initiative called the ‘Upsweep Project.’  The superior agrees with Busey’s appraisal that Mosaic is an ideal candidate for this project… the only concern is how to locate and capture him.  Yet Mr. Busey does not see this as a problem for he knows he can use Morris’ father as the perfect bait to lure Morris into a trap.

Elsewhere, with the use of Spidey’s body, Morris has finally made it to his father’s apartment.  He doesn’t find is pop there and instead sees him on the television giving a press conference.  In this conference, Morris father announces that his son has died.  And it is here that he issue ends with the promise of continuation with the next installment.

I’ve greatly appreciated the gradual boil approach Thorne and company has utilized in introducing us to Morris’s character.  Many characters have their origins told over the course of a single issue, if not just one page.  All that has happened to Mosaic over the last four issues could have easily been compressed into a single introductory issue; although I’m glad this hasn’t been the case.   The more gradual pace has offered much more time for the reader to really get to know Morris, understand who he is (or rather who he was) as well as the paths ahead of him regarding who he will be.

Mosaic possesses incredible powers.  What he will choose to do with these powers, however, remains very much unclear.  Most heroes act to protect the status quo… law and order, truth, justice and the American way.  Morris has no such stake in this status quo, no real reason to fight to maintain things as they are.

Over the course of Mosaic’s first four issues we have seen the character occupy the bodies of a Black teenager, an Asian businessman, a Latino would-be criminal, a white paramedic, a lesbian woman, and…  well, Spider-Man.    The guy has been exposed to a variable cornucopia of different ethic and cultural identities; he’s quite literally walked in their shoes, felt their feelings and mined with their memories.  How will this impact him?  How will it influence the choices he ultimately makes?
What an incredible hook and I just cannot wait to find out what happens next.

As for the art, it’s absolutely stellar.  Mosaic is one of the visually stunning books on the shelves and the art style syncs with story in a wonderful fashion.  Oh, and Randolph, Silas and Lopez depict one super-cool looking Spider-Man.  So good that I’;m more than a little worried that one of the Spidey books out there may try and pilfer Randolph off of Mosaic and get him to draw Spider-Man full time.  They better not, I’ll fight them!

Absolutely recommended.  Four and a half out of Five Lockjaws.