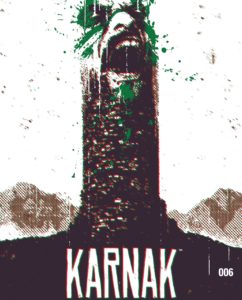 The Flaw of All Things comes to its existential conclusion, by the creative team of Warren Ellis, Roland Boschi and Dan Brown.

Acting on the behest of the secret spy organization, Shield, Karnak has ventured out to track down a young new Inhuman named Adam Roderick who has been abducted by a shadowy terrorist organization.  In his pursuit of Adam, Karnak discovered that the young Inhuman had manifested incredible reality-warping powers.  Adam had made himself into a god, his former abductors becoming his loyal acolytes.
Adam’s powers enable him to grant onto his followers everything they wanted, a sense of purpose and utter contentment.  Yet Karnak knew that all that Adam created was illusion; the reality that Adam crafted was artificial and inauthentic, his followers were made cattle stripped of their humanity.  To this extent, Karnak has deemed Adam an effrontery to the fabric of truth; and he has pledged himself to destroy Adam and put an end to this existential threat.

In the previous issue, Karnak had interrogated one of Adam’s acolytes, a powerful being known as The Painter.  In this interrogation, The Painter was able to hone in on Karnak’s insecurities, highlighting that the false sense of meaning provided by Adam is truly no better nor worse than the abject nihilism entailed in Karnak’s philosophy.  Karnak didn’t take kindly to this challenge and slammed his fist down with such precise magnitude that it caused the Painter’s body to explode in a gory torrent.  Karnak claimed that the acolyte was a human improvised explosive device, but Shield sub-director, Coulson, remained unconvinced.  Indeed it was becoming clear to Coulson that this mission has caused Karnak to become increasingly unhinged.

Karnak explains to Coulson what makes Adam such a threat.  Adam can see what people want and need and give it to them; and in so doing taking from them of something essential, making them less than human, turing them into monstrous slaves.  Coulson asks what it is that leaves Karnak immune to Adam’s powers and the reply is that it is his own selflessness and want for nothing that protects him.

Coulson’s agents have identified Adam’s whereabouts, retrofitting a teleportation device to send Karnak to him.  Karnak arrives at a darkened cavern and is immediately attacked by a host of giant monstrous spiders.  These spiders are the remnants of Adam’s followers, transformed into mindless creatures.

Karnak makes short work of these spiders, destroying them with a series of fault-finding kung fu chops and kicks.  Karnak then ventures further into the cavern, eventually finding Adam sitting alone in large room.

Rather than fighting, Adam merely asked Karnak why he should take such exception to what he has done, why is it a bad thing?  He offers people purpose and contentment, the solace of meaning.   What is wrong with that?
Karnak notes that these dutiful followers have been transformed into spiders, yet Adam retorts that the life of a spider is actually quite rewarding and structured.  He has made them simple and this simplicity has taken away their pain.

Karnak’s objection that it is all antithetical of truth.  He states that he helps people become free by accepting the absolute truth that they are nothing, they are meaningless.  It is harsh and it is painful, but it is the truth and is ultimately liberating.  To be a happy prisoner or be painfully free, these are the two poles from which Karnak and Adam argue.

In the midst of their discussion, Adam probes Karnak, seeking out his own flaw, determining how he can give Karnak what he wants and hence make him a slave.  Karnak may claim he has no wants, but of course this isn’t true.  Adam can see into Karnak’s mind and he can see that Karnak is not as egoless as he says and indeed possesses deeply seated feelings of anger and inadequacy.  His being denied Terrigenesis as a child appears to be at the root of his anguish.

Honing in on this pain and weakness, Adam offers to fix him, make him feel whole.  He will give Karnak what he wants and make him like him, cherish him as a god and become his slave.  Boschi and Browns art really cut loose in this scene, offering an haunting image of what it might be like to accept Adam’s godhood…

Karnak is clearly shaken, but retains his wits in time to dodge Adam’s enchantment.  Adam’s probing of Karnak has gone both ways and now Karnak is also able to ascertain Adam’s weakness, the flaw in his godlike powers.  He swings with a keenly placed jab, striking Adam in the temple and destroying the area of Adam’s neurological structure that control and enables his powers.

A second blow renders Adam a near vegetable, effectively resetting his neurological functioning to that of an infant.

The narrative leaps forward to Karnak returning Adam to his parents’ care, promising them that Adam will be able to rehabilitate (it’s anyone’s guess whether or not Karnak is telling them the truth).  In return, Karnak asks for his payment.  This harkens back to the first issue in which Karnak agrees to rescue Mr. and Mrs. Roderick’s son in exchange for a simple request: that they offer to him the singular that enables them to see the world as a kind and meaningful place.

Mr. Roderick had thought the matter over and hands to Karnak a photograph of his family.  It’s a picture that was taken on a day in which they told their son that anything was possible, that he is loved unconditionally and could be whatever he wanted to be.  He gives this photograph to Karnak as a gesture of letting go of that kind, gentle sentiment.

Karnak receives his payment with cold detachment and makes his leave.

A final scene shows Karnak kneeling before the great stone in his Tower of Wisdom.  He has placed the photograph of Adam’s family at the foot of the stone.  Alone and unseen, Karnak allows himself to give into his sorrow and covers his face.  And it is here that the series ends.

In announcing the completion of the final script for his Karnak tale, writer Warren Ellis dryly referred to the whole matter as “just bad readings of philosophy, punching, and a character study of an absolute trashfire of a human being. But I like to think it was worth it.”

Well, it has been certainly worth it, there has been a lot of punching and Karnak himself is indeed something of a trash-fire… I agree with it all except for the ‘bad readings in philosophy.’

I’m by no stretch an expert on the works of Nietzsche, or Kierkegaard, Baudrillard nor Sjöstedt-H. Yet I know the material well enough understand Ellis was not merely name-dropping the theories for the purposes of a pretentious backdrop for violent action.   Ellis uses the theories but doesn’t resort to longwinded exposition or esoteric references; it’s not pedantic.  It’s accessible, straight forward and unapologetically weird.

Karnak and Adam’s battle is essentially a question: is it better to believe in a higher power and in so doing become trapped and blinded, be rendered as sheep (or in this case spiders); or is it better to deny this higher power, to be free of it and embrace the harsh truth of meaninglessness?  This question is posed, but an answer is not really given.  Karnak talks like he knows what’s what, that he is without flaw.  Yet it is made abundantly clear that he is quite flawed; that he is a sad and angry little man who is intent on enforcing his misery on everyone around him.

Adam was indeed a threat… his godlike powers could have rendered all mankind into mindlessly content followers.  And Karnak is something of a threat as well.  His strict adherence to nihilism is cruel and dogmatic.  He and Adam are two sides of the same coin… I don’t want to buy what either of them are selling.

Karnak is by no means someone I would want to hang out with; I don’t agree with his philosophy and he’s a rather miserable bastard.  And yet he is just hugely fun to read about.  And the general tenner of this newer version of Karnak has been picked up by the other creators including Karnak in their tales.  Both Al Ewing and Charles Soule have done terrific work in running with the version of Karnak Ellis and company have created.  And it’s ended up making Karnak one of the most interesting and fun to read about characters in the entire Inhumans pantheon.    I can’t wait to see what Mathew Rosenberg does with Karnak in the upcoming Secret Warriors series.  The prospect of Karnak interacting with the likes of Kamala Khan and Lunella Lafayette fills me fearful excitement.

The whole series has been a bizarre, thought-provoking, thoroughly unsettling and tremendously fun read.  It’s unequivocally recommended.  Five out of Five Lockjaws.