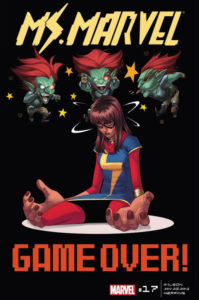 The Doc.X story hurdles to its climactic conclusion in this latest installment of the Hugo Award-nominated Ms. Marvel from the creative team of G. Willow Wilson, Takeshi Miyazawa and Ian Herring.  Full recap and review following the jump.

The villain known only as Doc.X has revealed itself as a living computer virus… a malware that has somehow gained sentience and will stop at nothing to augment its knowledge and power.  It is a learning program, yet it learned via online gaming chat boards where people are often quite nasty toward one another; and from this the sentience has cultivated a supremely malevolent and malignant morality.

Doc.X had attempted to blackmail Ms. Marvel into doing its bidding.  If she resisted then it would publish her friend, Zoe’s love letters to Nakia, forwarding them to all of the phones and email accounts of their entire high school.   Yet what Doc.X demanded, that it be plugged into the surveillance array at Shield, was far too much of a threat to all the world and Ms. Marvel had to resist.  Kamala warned Zoe, but nothing could stop her secret from being shared with all of their classmates.
Now Zoe has to show up at school, unwillingly outed as gay with all of her embarrassing declarations of love out there for everyone to see.   Mob mentality takes over and, defused of any sense of personal responsibility, her classmates begin to tease her mercilessly.  Poor Zoe… I feel so terribly for her.

Fortunately Zoe’s friends are there for her.  Nakia cannot reciprocate Zoe’s love on a romantic level but her love as a friend will always be there.  She embraces Zoe in a sign of solidarity.  Kamala sees this and hugs them both.  Mike and Gabe soon join in and before you know it a whole large group of friends are holding each other with Zoe in the center.  It’s a wonderful scene, illustrative of how getting over one’s sense of embarrassment and just being there for others easily overwhelms the shallow taunts and pettinesses of others.
It all gives Kamala an idea as to how to defeat Doc.X.  As corny as it may seem, the power of friendship and human decency is going to be her greatest weapon.

Somehow Kamala is able to convince her fellow guide members (the kids she has been campaigning with online) to all congregate in New Jersey.  They are quite surprised to discover that the person they have been gaming with is none other than Ms. Marvel, a real to life super hero!

Ms. Marvel explains to them all that has happened, that they had unwittingly helped in forging the malignant attributes of Doc.X.  Being so cruel and thoughtless in their comments had helped to craft Doc.X’s acidic persona and the only means of undoing it all is to demonstrate civility and kindness.  In short, they have to make the internet nice…  oy vey…

The guild recreates their first campaign only this time they are kind and cordial and considerate to each other.  Another campaign of gamers shows up, angry that they had been beaten to the boss level.  Rather than goading and shit-talking, Ms. Marvel’s campaign are instead apologetic and offer the other campaign all of the special awards and booty they had gathered.  The gesture has a dramatic effect.  Such graciousness is super unexpected in gaming; one player states that it’s the nicest thing anyone has ever done for them.

Mike monitors their progress from a separate computer, somehow spreading the message and proliferating this sentiment of goodwill.  Doc.X leaps onto her system and attempts to bully her, but already Ms. Marvel and the others’ actions are having an effect.  The niceness is corrupting Doc.X’s functionality, creating a paradox that it doesn’t know how to process.

Ms. Marvel leaves her fellow campaigners to keep up the good work while she initiates step two of her plan.  Now weakened, she needs to lure Doc.X out into the open, yet must find a location devoid of machinery or other people.  Unfortunately, she has lost track of the date and accidentally wanders right into the Jersey City Founder’s Day Parade.

Doc.X is unable to take over Ms. Marvel’s body, but it can take over the body of everyone else and now Kamala has accidentally led it to this huge mass of potential victims.  She tries to scatter the crowd telling them that they’re all in danger.  Unfortunately this is New Jersey and a young Muslim woman in a wild outfit spouting dire warnings of doom doesn’t exactly garner the response she had hoped for…

It’s too late!  Doc.X has found her.  It takes over the bodies of several of the parade participants and uses them to attack her with insults and super-powered punches.

Yet Doc.X can tell that it is growing weaker and weaker.  The niceness spread by Mike and the others is having its effect.  The power Doc.X has drawn from online cruelty has dissipated and it feels itself quickly becoming deleted.  Yet its not going to go without parting words of doom and gloom.  Paraphrasing Obi-Wan Kenobi, Doc.X states that it may be struck down but its malevolence will return stronger then ever.  It has tasted the spite in the heart of mankind and feels assured that humans are destined to be engulfed by their own primitive cruelty.

And just like that it is over.  One last punch from Ms. Marvel and Doc.X evaporates into the ether, leaving behind nothing but its dire warnings.

All and all this was a rather quick, somewhat anticlimactic conclusion to the story.  Although a sense of anticlimax is likely unavoidable in that the actual victory occurred in the prior issue when Zoe confided her crush to Nakia and the two were able to effectively deal with it and remain friends.

Doc.X is a purposefully one-dimensional and cliché villain.  It serves merely as a vehicle to explore the nature of interpersonal interactions in the modern, digital era.  How Ms. Marvel is ultimately able to defeat Doc.X is difficult to fully understand on a practical or logical level.  I’m not sure how one online gaming campaign can suddenly make the internet a friendly place.  On an emotional level, however, it all makes perfect sense.   Being mean and critical is easy and creates the illusion of power.  Whereas being nice and open can be difficult and embarrassing, yet it creates a true power… a power that can overwhelm and drown out that cruelty.

Anonymous, faceless cruelty, the kind one is likely to encounter online, has a special kind of valance.  Being anonymous, one can feel unburdened of responsibility and emboldened to give in to their more dark and mean inclinations.   And yet the same factors that make anonymous cruelty so malignant also offers anonymous kindness incredible power.  It is a truly selfless gesture the effects of which can be profound.

This is the dilemma that faces Kamala and her peers, indeed what faces the younger generation here in the real world.  Does one give in to the quick, easily-found ersatz strength of cruelty and division, isolation and solitude; or does one expose vulnerability, traverse embarrassment, and put in the hard work to be kind and inclusive and in so doing garner a true and legitimate strength?  Will Doc.X’s gloomy forecast of human nature come to pass or will a different more difficult but ultimately better path be taken?

The Doc.X saga is going to go down as one the great comic tales of the modern era.  Of course recommended.  Five out of Five Lockjaws.