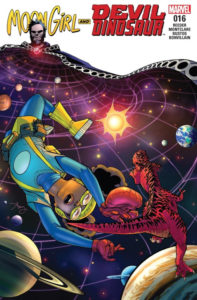 Amadeus Cho’s declaration of Lunella Lafayette being he smartest person on earth has offered her a tremendous ego boost, but also a host of trouble.  It’s put Lunella is the crosshairs of Doctor Doom (or at least a version of Doctor Doom… it remains unclear what’s the deal with this version of Doom).  In any case, Doom is set on eliminating Lunella so to prove his own superior intellect and it’s all been quite perilous for Lunella.  Perilous as well as irksome in that Doom utilizes aspects of magic and mysticism in his science and Lunella has greatly struggled with understanding (or accepting) this matter.  Her efforts to do so has brought her to the home of Dr. Stephan Strange, the sorcerer supreme and go-to guy for all things magic in the Marvel Universe.

In the previous issue, Devil Dinosaur had bumped into a power line while Lunella was riding join his back.  The resulting shock of electricity triggered an episode of Lunella’s mind switching powers whereby her consciousness is transferred into Devil D’s body and his into hers.

This issue opens up with a wonderful dream sequence entailing Lunella’s struggle and reluctance to make sense of magic.  Busts and Bonvillain do a terrific job of channeling the wild look of Steve Ditko’s backgrounds in his original run on Doctor Strange.

Lunella wakes up to find herself in the care of Dr. Strange.  Right off the bat, Lunella is a bit ornery toward Strange, suggesting he’s not a real doctor and likening sorcery to parlor tricks.

It’s clear that Lunella just does not like magic.  She does not like things that cannot be explained by science and rationality.  The idea that there could be so much in heaven and earth than are dreamt of in her philosophy seems to both irk and frighten her.

Strange is quite patient with her.  He doesn’t seem bothered by Lunella’s reluctance to accept magic, nor put off by her questioning his legitimacy.  He does maintain his usual flamboyance, however, gesturing about with his hands and invoking his signature catch phrase ‘By the Horay Hosts of Hogarth!’  Oh, and Bustos illustrates a mighty fine looking Doc Strange.  I know he’s supposed to be handsome, but… damn.

In any case, Strange has used a spell to reduce Devil Dinosaur is size, making him no bigger than a house cat (though a good deal less dexterous than one).  Strange claims to have used the spell of the Tincture of Tinniness, though Lunella insists it must have been Pym particles.  Strange notes that the spell will wear off on its own, but he offers a vial of its antidote if she needs Devil D at full size sooner.   Still, Lunella remains reluctant to accept the validity of such spells and serums.  “For the person with the biggest brain,” Strange says, “you should be less afraid to keep an open mind.”  Their conversation is interrupted by trick or treaters who have rung the doorbell.  It reminds Lunella that she needs to get home before she gets into trouble with her mom and dad.  Strange offers Lunella a dog leash for Devil D and sends her on her way.

It’s Halloween in Greenwich Village so Lunella doesn’t have to worry about her and Devil D sticking out.  She walks home and runs into her classmates, Zoe and Eduardo.  The two are dressed up as Moon Girl and Devil Dinosaur and it’s just about the most adorable thing ever.

Then the four of them bump into Dr. Doom.  At first Lunella assumes it is just someone in a Halloween costume, but it son becomes clear that’s it’s the real deal.

Fortunately, Dr. Strange had been following behind to make sure Lunella got home safely and, with his trusty battle axe in tow, Dr. Strange assist Moon Girl in taking on Dr. Doom.

In an act that is equal parts annoyance, impulsivity, and blind faith, Lunella decides to drink the serum that was meant to restore Devil Dinosaur to full size,  It results in Lunella’s body quadrupling in size, a thirty foot tall behemoth with her ‘brain in the right place.’  It affords her the raw power needed to fend off Dr. Doom’s attack.

Doom knows that he is bested and manifests himself away, promising to return to once more bedevil Moon Girl.  Lunella shrinks back down to regular size.  The threat appears to have passed and Lunella, Zoe and Eduardo part ways with Dr. Strange as they head home.  Strange states that they are safe and that he has foreseen that theirs paths will cross again soon.  Lunella coyly asks if he’d seen such a thing in a crystal ball.   “Maybe,” Strange responds, “or maybe it is just life experience.”

It begins to rain.  Zoe and Eduardo have made it to their own homes and Lunella is about to make it to her own when she is approached by a group of heroes.  I’ll leave out who these heroes are in the case that it may spoil the ending of a certain cross-over event, but suffice to say they will be the guest stars in the following issue.  And it’s here that the installment comes to an end.

Another super fun ride!  Moon Girl and Dr. Strange make for an odd and very enjoyable pair and Lunella’s stubborn refusal to accept magic is an interesting wrinkle that works quite well in underscoring the central premise of ‘The World’s Smartest’ storyline.

Lunella lives in a world where there are alien beings, super heroes and demigods routinely flying by.  In such a world it is kind of weird that she would have such difficulty accepting the presence of magic.   Arthur C. Clark’s notion that “magic’s just science that we don’t understand yet,” comes to mind.  Nonetheless, Lunella’s inflated sense of her own intellect is seeming to have an especially hard time grappling with there being things she cannot understand yet.

Knowledge and wisdom go hand and hand, but they are still two very different things.   Knowledge is knowing things, whereas wisdom is knowing that there are some things that simply cannot be known… and understanding and accepting this truth.  Lunella has plenty of knowledge, but not yet a lot of wisdom.  Such wisdom can really only be achieved through what Dr. Strange suggests: life experience.

It’s going to take more than raw intellect to defeat the threat Dr. Doom poses.  Lunella is going to have to learn to rely on others and accept her own limitations in order to prevail.  Doing so will ultimately make her a much stronger person.

Bustos and Bonvillains illustration is (once again) fantastic.  As smart as she is, Lunella is not especially in-tune with her emotions.  As a result, Lunella tends to emote mostly through her facial expressions and Bustos just so excels in capturing these expressions on the page.  It’s all quite brilliant.

Absolutely recommended.  Another must-read… Four and a half out of Five Lockjaws!