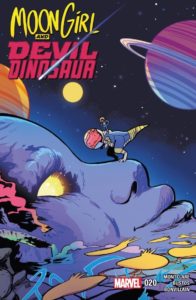 It’s the second issue of Moon Girl and Devil Dinosaur’s new adventure off into the cosmos.  Brought to us by the creative team of  Brendan Montclare, Natacha Bustos and Tamra Bonvillain.

Last issue, Lunella happened upon an interstellar distress call from a mysterious girl named Illa.  Intent on saving this girl, Lunella built the Moon Mobil, an intergalactic spacecraft powered by the Omniwave Projector, and she and Devil Dinosaur rocketed off to another galaxy.  Tracing Illa’s signal brought them to a small and strange moon and it wasn’t long before they discovered that Illa wasn’t on this moon, she actually was this moon.

Illa is a living planetary entity.  She was born when an unknown comic force crashed into Ego The Living Planet like a comet and broke off a small piece that shaped into its own spherical proto-planet.  Ego and Illa, father ad daughter, only got to meet each other for a brief moment until the forces of orbital gravity whisked them away from one another and Illa has been alone and adrift ever since.

Determining the trajectory of Illa’s orbital rotation around her larger parent planet, Lunella determines that the problem is that the rotational revolution is fixed and situated in a fashion that Illa’s face is never directed inward.  In short, Illa’s back is always turned to her father and left her feeling desperately alone.

Lunella draws out her theorem on the soil of Illa’s surface.  Doing so tickles Illa; she can feel everything that happens on her moon-based body.  It makes Lunella wonder, are there other planets like Illa out there, planets that have sentience or that can feel everything that happens to them?  Is earth similar?  Does earth feel all of the various things we do to injury and help her?

Before Lunella can ponder the matter any further, she and Devil Dinosaur are besieged by a swarm of giant bug-like creatures.  These bugs are sort of like space fleas that live off of cosmic bodies like parasites; and Illa is infested.  Moon G and Devil D jump into action to defend themselves.

Devil Dinosaur really gets to let loose.  Despite his giant mouth being kept behind the faceplate of his adorable dinosaur-snapped spacesuit, Devil Dino is able to make short work of the marauding mites, ripping them apart with his claws, stomping them with his feet and squishing them with his swinging tail.  Hopelessly outmatched, the surviving fleas scurry off.

Lunella seems to have some ideas as to how to help Illa’s situation, but she needs to relocate to a safer, more stable location to work them out.  Moon Girl and Devil Dinosaur board their Moon Mobil and blast off.  Illa mistakes their intentions as their attempt to abandon her.  She throws a temper tantrum, exerting gravitational forces that wreak havoc on the instruments of the Moon Mobile.  The Omniwave Projector, the ancient Kree device that powers the craft, has been acting hinky of late and Illa’s tantrum further compounds its disfunction.  Lunella tries her best, directs the craft toward home and simply hopes they can power through it.

At first, it appears that they have succeeded.  The Moon Mobile reenters earth’s solar system and Lunella pilots it back to earth, back to the lower east side of Manhattan.  Yet, when she arrives, it becomes quickly evident that they have not returned to the same earth from which they had departed.  Somehow, Illa’s tantrum and the malfunction of the Omniwave Projector has caused them to pass through a dimensional rift, leading them to an alternate reality.  This is a very different earth and, when Moon Girl and Devil Dinosaur land, they are met by a very different version of themselves.  Moon Girl and Devil Dinosaur meet Devil Girl and Moon Dinosaur… and the pair don’t appear to be very friendly.

And it is with this surprising twist that the issues comes to an end with the promise of continuation with the next installment.

The main story is interspersed with a pair of interludes where it is shown that Lunella has created robot versions of herself to take her place while she is off on her mission to help Illa.  It turns out that Lunella is quite skilled at creating android duplicates, but perhaps not as apt at it as she may think.  The android duplicate goes a bit haywire while playing dodgeball in gym class, decimating her classmates with dodgeball chucks that are a bit too precise and powerful.  Even Coach Hrbek gets pummeled by a dodgeball to the back of the head.

To make matters worse, the robotic Lunella duplicates have all been left in the care of the disembodied DoomBot head that Lunella has kept in her Laboratory.  The DoomBot may seem harmless, bodiless and fastened atop an old rocking horse, yet it still possesses a cognitive motherboard modeled after the ingenious and nefarious Victor Von Doom… and it appears as though it has plans to manipulate the android Lunella duplicates, to cultivate the androids’ burgeoning sense of self-interest…  All this is sure to lead to some serious trouble in the future.

This was another very fun issue.  The action is cool and the inventive, outré science of how a living moon might be born is extremely cool.  A lot of different themes and allegories are being set up, yet are left a touch half-baked.  The notion that our own planet may be just as sensitive and easily hurt as Illa is put out there, but not really hammered home.  Likewise, the parallel between Illa and Ego and Lunella and her own parents is intimated, yet kind of needed to be made more overt.

Illa is like earth’s moon, it orbits its parent planet but doesn’t rotate on its own, meaning there is always a side face earth and always a side that faces away.  Illa’s face is on the far side of her orbital axis, meaning she can never see her father; her back is always turned.  This is quite similar to Lunella’s relationship with her own parents.  Lunella’s back is also always turned, her attention is always to the future, to what’s out there and what’s to come.  While it is Illa who feels isolated and abandoned, with Lunella’s situation it is her parents who feel alone and left behind.  The mounting tensions between Lunella and her mom and dad has been percolating for so long now that I might be reading in metaphors that aren’t intended… future issues are likely to see Illa ultimately reunited with her father and I hope this will lead to Lunella coming to realize just how much she has been icing her own parents out.

It is very cool getting to see Bustos and Bonvillain stretch their artistic skills in creating the alien setting of the adventure.  Natasha Bustos is subtle in the ways in which she relays emotion in her character’s facial features, yet it works just wonderfully well.  This is especially true for Illa, whose face can re-manifest on any part of her surface.  Bustos draws Illa’s face with a fantastic sense of expressiveness; she’s lonely, innocent, but also kind of a brat.  The little gap between her two front teeth is adorable.

There have been a lot of anthropomorphic cosmic entities in the Marvel Universe (Ego The Living Planet, Master Order, Galactus, The Living Tribunal, et cetera).  These beings almost always have faces with distinctively european features, as though such features are some kind of cosmic norm.  Illa bucks that trend.  Her facial features are a bit more ethnically ambiguous… to me, she sort of looks like she’s Latina.  Whatever the case, I liked it because it lead me to reconsider just how accustomed I’ve become to imagining cosmic beings as having faces similar to a white person’s.

Tamra Bovillain uses a lot of purple and blue hues in coloring the landscape of Illa the Living Moon.  it makes for a neat juxtaposition in which Lunella, in her yellow and white togs, really stick out.  Bonvillan and Bustos work so well together, with seem to bring out the best in each other’s work.

Just a quick tidbit for the dinosaur lovers and junior paleontologists out there…  this issue finally makes a note of the fact that Devil Dinosaur being cold blooded and lacking feathered plumage is an anomaly, possibly a product of his originating from a different universe.

Definitely recommended.  Three and a half out of four Lockjaws!