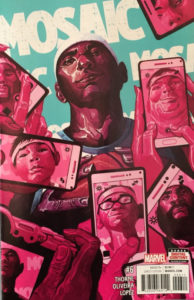 The next chapter of Mosiac begins here from the creative team of Geoffrey Thorne, guest illustrator, Bruno Oliveira, and colorist Emilio Lopez: with an awesome cover by Mike del Mundo.

Following the intense melodrama that was the conclusion of IvX, Thorne and company’s sixth issue of Mosaic is the perfect palette-cleanser.  …A fun, smart comic that puts forward lots neat ideas without the burden of stern, over-seriousness and ham-fisted metaphor.

Last issue, the new Inhuman, Mosaic, leaned the terrible truth that his father had essentially sold his son to the biological weapons and development firm known as The Brand Corp.  Brand Corp was all about harvesting ‘seeds,’ individuals with special powers and gifts, Mutants, Inhumans and whatnot who could be dissected, reverse engineered and harvested in the development of weapons, medicines, and all manner of high-profit endeavors.

It was all a devastating revelation for Morris.  Fortunately he was able to utilize his body-jumping powers to escape and trigger an explosion within the Brand Corp’s downtown headquarters that prevented his father and the other bad guys from getting away with his original body.

In the aftermath, Morris leaps into the body of one of Brand’s search and recovery operatives in an effort to venture into the wreckage of the building and hopefully find his original body.  He finds it, along with those of five other poor souls who have been made the victims of The Brand’s sinister schemes.  Each have been encased in some sort of protective sarcophagus that Morris hasn’t he faintest idea how to open.  He figures he can ride things out inside the body of this Brand operative and wait until the opportune time to reoccupy his body and make good with his escape.  That’s when things turn sideways.

Lockjaw, the enormous canine Inhuman comes teleporting onto the scene.      …and he seems intent on grabbing the body of the operative Morris is possessing.   Desperate and unsure what to do, Morris tries something completely new, projecting his conspicuousness into Lockjaw and possessing the giant bulldog’s mind and body.
It doesn’t go as well as hoped…

Lockjaw’s mind doesn’t work like a human’s mind.  Senses are overly intense, thoughts are overly simplified; Lockjaw’s canine thoughts are basic, but the variable torrent of heightened smells, and sounds and sights are all so intense that Morris can barely hang on.
Morris struggles to make sense of the very different way in which Lockjaw’s neurology works.  Alarmed, Lockjaw teleports all over.  He goes to Asgard, The Moon, Dr. Strange’s Sanctum Santorum, and finally New Jersey where he finds Ms. Marvel (Kamala Khan).

Throughout, we get a snapshot of how Lockjaw more simple, animalistic thinking views the world around him and it’s pretty neat: The Watcher is ‘Bald Guy’ Doc Starnge’s assistant, Wong, is ‘treat guy,’ Ms. Marvel is ‘Blue Girl,’ Crystal is ‘Wind Girl’ and Medusa is ‘Alpha.’

Ms. Marvel can tell that Lockjaw is in distress and tells him that he needs to go home, that the Royal Inhuman will know what to do.  She points him in the direction of New Attilan on the Hudson and reiterates ‘go home.’  Which he does.  good dog!

Arriving in New Attilan, Morris and Lockjaw are still struggling over who control whom and Lockjaw tramples through the main square, knocking over various Inhumans.  John Storm, The Human Torch (who has been acting as the Inhumans’ superhero liaison (among other things ahem)) swoops in.  There’s something special about how Johnny’s powers work and it enables him to see Morris is his spectral form.

Morris exists Lockjaw to take a breather in his invisible form, but Johnny can see him and flies down to confront him.  Morris is quite taken aback, how is it that Johnny can see him in his ghost-like form?  Fortunately, in his prior life Morris was quite the party-goer and he and Johnny actually know each other from a romp in Rio de Janeiro.  In short, the two do not fight and instead Johnny brings Morris to Medusa and the others for introductions.

Only none of the Royal Family can see Morris.  Johnny can, but only when he is famed on.  When he flames off, Morris again becomes invisible to him.  The comic timing in this scene is top notch.

Johnny spent a long time learning to control his flame-based power, which seemed to entail coordinating a delicate balance between his voluntary and involuntary nervous systems.  His sister, Sue Storm, helped him in this process and he imparts her lessons onto Morris, getting him to concentrate and tune it, and before long Morris learns how to make himself visible.

Medusa and Morris walk out to one of the verandas overlooking the bay and discuss all that has happened to him.  Morris describes the his understanding on how his powers work, how he can utilize a person’s knowledge and skill set in the moment, but only trace memories remain once he leaves and possesses someone else.

Medusa suggests the title ‘Mosaic’ as his new Inhuman name, a reference to the kaleidoscope of disparate memories and skills that is able to retain.  Morris is initially reluctant to take on a new name, yet the fact that much of his life as  Morris Sackett has been predicated upon lies and deceit, it’s likely that he will soon come to embrace the name (and the new life it entails) wholeheartedly.

Morris’ story thus far has all taken place in the recent past of standard Marvel Continuity.  To be exact, Morris has come to New Attilan very soon after Tony Stark had abducted the new Inhuman, Ulysses Cain (as detailed in the early issues of the Civil War II event).  Medusa asks Mosaic to run a mission for her… she wants him to use his special gifts to infiltrate Stark Tower, possess Stark’s chief financial officer and use him to reroute the lion’s share of Stark’s funds to a off-shore, impossible to access local.  This will be done as a means of motivating Stark to return the abducted Inhuman youth.

Morris isn’t thrilled over the possibility of taking on Iron Man, but he is a thrill seeker at heart and the challenge of it all is too much for him to pass up. So he accepts and fulfills the mission (and this relates to Mo’s first appearance in the pages of  Uncanny Inhumans #11).

The whole endeavor is something of a lark for Morris and he takes comfort that nobody got hurt.  Unbeknownst, to Morris, Medusa and the others, however, Maximus the Mad has been plotting his own revenge on Tony Stark and Morris looks on in horror as Stark Tower explodes and crumbles down into ruble, claiming who knows how many innocent victims.

And this is where the issue ends, with Morris left likely believing that the Inhumans of New Attilan are murderous terrorists who had coerced him into taking part in a terrible scheme.

That last scene notwithstanding, Mosaic #6 was a hugely fun ride that injected some much needed levity and lightness into what had (in the last issue) become a rather heavy and emotionally disturbing story.  Excellent work on the part of Geoffrey Thonre in regards to navigating the tenner of the series.

I’m glad to see the narrative of Mosaic quickly catch up with the standard here-and-now of the Marvel Universe.  And even more glad to see Morris interact with the Inhumans of Attilan (and that we’ll get to see more of it in the next installment).

Morris’s quick foray possessing Lockjaw was a highlight of the issue and I really liked how the dialogue bubbles reflected the simple, straight-forward cognition of how a dog’s mind might work.  Identifying Medusa as ‘alpha’ was a particularly nice touch.

The ‘burning question’ of the issue is why Johnny Storm can see Mosaic in his non-corporal form while others cannot (others with the exception of Fife that is).  It’s an interesting matter to speculate on… although I imagine Geoffrey Thonre already has a very specific answer in mind, I’ll go ahead and offer my interpretation nonetheless:

Johnny can control fire.  In order to see while in a flamed-on state, Johnny must possess a sense of vision that can see on a broader wave-length of the visual spectrum.  Otherwise he would be blind whenever flamed-on.  Mosaic is not a ghost per see but rather a being made up of synaptic energy, invisible to the naked eye but visible on the ultraviolet end of the visual spectrum.  Hence Johnny can see Morris when flamed on, but cannot when he is flamed off.  Science!!!

As much as I miss Kharay Randolph’s stellar illustration, Bruno Olveria does excellent work filling in.  He particularly excels at capturing facial expressions of emotion and this really hammers home that particular scene where’re Johnny is trying to introduce the Royals to an Inhuman who doesn’t appear to be there.  My only complaint is that we didn’t get to see a ‘Mosaic-effect’ scene (with the honeycomb pattern of disparate memories and whatnot) from inside Lockjaw’s head…. that would have been awesome.
Emillo Lopez, as always, kills it on the colors.

Another fantastic issue!  Mosaic continues to be one of the better, more unique and innovated superhero comics on the stands.  It has been both baffling and disconcerting that the series itself is not seeing better.  And I remain hopeful that the upcoming release of the first trade paper back will help to amp up sales.  People really need to read this book!!!

Four out of Five Lockjaws!