You are here: Home / Reviews / The Royals #5 Review (spoilers) 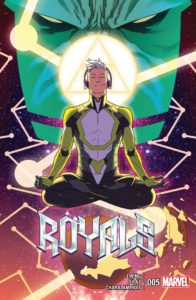 The following issue saw the Royal squad crash landing onto the scorched soils of dead planet, Hala.  Hala had been destroyed in the pages of the Black Vortex story event and Marvel Boy has led the Royals to this dead world with he promises of discovering the secrets of Terrigen.  Ronan The Accuser had been bestowed tremendous new powers by The Back Vortex and now stands sentry over his deadened world.  He was displeased by the prospect of visitors and attacked the Asterion, causing the ship to crash.

The Royals survived, only to be besieged by Ronan’s new powers.  This power entails a psychic attack where each of The Royals are transplanted to a psychic plain where they are forced to re-experience feeling of past regret, eliciting such intense sensations of guilt and sorrow as to leave them immobilized.  Each except for Crystal, who was spared Ronan’s attack.

Ronan and Crystal were once married.  It began as a political marriage meant to cement the bond between the Kree and Inhumans.  Although the marriage had been forced upon Crystal, she and Ronan ultimately fell very much in love and both were heartbroken when the politics between their peoples caused their union to be annulled.  Now Ronan sits before his former wife and proclaims that she stands accused of turning her back on true love and breaking his heart.

Ronan’s recollections of the Inhumans’ rule over The Kree and his marriage to Crystal all took place in the pages of Jonathan Hickman’s seminal run on Fantastic Four.  Although how exactly Ronan choose to recall these events appear to be skewed by his grief and anger.  He accuses the Inhuman Royals of abandoning The Kree when they had grown bored, that Crystal had turned his back on him.

In truth, Ronan had been intent on re-attaining Kree sovereignty and to this extent he engineered the creation of a new Supreme Intelligence to lead the Empire.  It was this new iteration of Supremor who forced the annulment of Ronan and Crystal’s marriage; and Crystal chose to leave him so to ensure the welfare of both their peoples.

Crystal and Ronan discuss this is and it is very refreshing to see Crys elevated from wall flower status in this book.  Crystal has grown; she has emotionally matured a good deal since the two were together.  She stands up for herself and does not bend to his unfair accusations.

Crystal’s refusal of Ronan’s accusations are sound and he knows it.  He realizes that his pain and bereavement has twisted his mind.  The hate has faded away, leaving behind the unbearable sorrow that his anger had acted to obscure.  It is too much for him and Ronan attempts to kill himslef, turning his weapon unto himself.  Crystal acts quickly, unwilling to allow her one-time love to go through with this desperate act.  She uses her elemental powers to restrain Ronan, preventing his attempt at self destruction.

Elsewhere, Marvel Boy struggles in the psychic plain of guilt where he is lambasted by his former girlfriend, Kate Bishop.  The two had become an item when they both served on The Young Avengers.  Noh-Varr did indeed break up with her, but it is quite a stretch to suggest that he had broke her heart.

She says things that Noh knows the real Kate Bishop would never say and it enables him to realize his predicament.  Ronan’s new psychic abilities are not altogether unlike his own pocket battlefield, a realm where the laws of psychics and reality can be manipulated.  Yet Noh has these powers himself and he uses his own pocket battlefield to escape.

Upon escaping, Noh encounters Maximus.  Max has escaped as well; escaped by way of his own quasi-psychopathy.  Ronan’s psychic powers are fueled by guilt and feeling guilt is not an emotion that has all that much of an effect on Maximus.  As such, he was able to escape it quite easily and quickly.

Medusa also escapes the guilt realm by fighting back against a manifestation of her former love, Black Bolt.  This vision of Black Bolt accuses Medusa of leaving him stranded in his prison, turning her back on their love.  Yet both have known the intense responsibility of leadership, of being the rulers of their people; love is a luxury and a ruler must choose duty over love.

Medusa, Maximus and Noh-Varr convene and it is here that Noh’s ulterior motives become clear.

For millennia, The Kree have been ruled by a Supreme Intelligence – a biological computer that becomes a repository of massive amounts of data, issuing forth commands based on raw logic.  Each version of the Supreme Intelligence begins with a seed and, when it dies, it leaves a new seed behind.

Noh leads them to the antechamber where this seed lays doormat.  He begins the process of its regeneration by adding to it the remnants of The Plex Intelligence.

Plex was a benevolent artificial intelligence who came with Noh-Varr to this reality when his inter dimensional ship crashed.  Plex was eventually killed, but Noh held onto its remains and now uses it to fertilize the seed and create something new.

Medusa expresses reservation, but Noh assures her she has no need to fear.  He heralds from a much more peaceful Kree Empire, an alternate version of The Kree that embraced the tenets of love and discovery over conquest and domination.  This new amalgam of the Plex and Supreme Intelligences will bring forth a new era of peace and prosperity to The Kree people…  This has been Noh-Varr’s intention all along.  And activated by the Supreme Intelligence seed, The Plex Intelligence can now illuminate them of the secrets of Terrigen.

Ronan continues to struggle against Crystal’s elemental powers, yet he is stilled when he hears a disembodied voice.  It is the voice of the new Supreme Intelligence.  It sates that ‘the love of Hala is infinite; that you must accept it and forgive yourself.’

Gorgon, Swain and Flint also hear this voice and it breaks them free from the psychic binds that had ensnared them.

The information The Royals have sought out is relayed to Noh-Var and he tells the others what he has learned.  Eons ago, the Kree ventured to distant planets searching out a means to restart their own stagnant evolution.  They traveled to earth, experimenting on primitive humans and creating the Inhumans; and conducted similar experiments on the alien races known as the Kymellians, The Badoon, The Centurions and countless others.  Each were bestowed with a catalyst that would bring about their actualization.  The Inhumans of Earth were given Terrigen, The Kymellians were given Antigen, The Badoons Amphogen.  Each of these catalysts were derived from Primagen, the ‘prima materia’ that created the Kree in the first place.

Yet who was it that created the Kree?  Who was it that bestowed this ancient race with the Primagen?  The knowledge is lost, but the answers can be found with the Sky Spears.

It is here that the narrative shifts some five thousand years into the future.  Maximus, the last Inhuman has sought out a Kree spacecraft that had crashed into the barren earth hundreds of years ago.  Within, Maximus wakes the Final Accuser, who is revealed to be an aged Noh-Varr.  Maximus has awoken Noh-Var The Accuser to warn him that ‘they’ are coming back… that the folly they committed so many years ago was once more returning to haunt them.
They aged Noh-Varr laments the idealism and naiveté of his younger self.

Another wild and weird sci-fi romp from Ewing and company.  I got the privilege to speak with Mr. Ewing for an interview for the Attilan Rising Podcast (you can hear the interview here).  There in Mr. Ewing spoke of his love for Hickman’s run on Fantastic Four.  This is quite evident in this issue with Ewing picking up and expanding many of the way cool outré concepts Hickman had put forth on FF.  And this looks to continue in subsequent issues as The Royals are set to cross paths with the other members of the Universal Inhumans.

Tethering the whole matter to The Sky Spears is a very gratifying concept.  The Sky Spears were first introduced in Uncanny Inhumans #1 and the mystery of what exactly they are has been left unrevealed.  It would appear that the spears are connected to these Progenitors, a group of space gods that are rather formidable looking.  In the letters page of the issue, Ewing shares some of the concept art of The Progenitors produced by Javier Rodriguez.  They are extremely cool and are likely to become a welcome addition to Marvel’s pantheon of interstellar threats.

A central theme throughout the issue is one of regret and fortitude in the face of one’s duty.  Each of the characters, Crystal, Ronan, Medusa and Noh-Varr have been forged by their regrets and hardened by their individual senses of duty.  Who they each feel they should be has acted to shape who they are.  They have each made themselves, which makes it ironic that they should end up seeking out their creators.  Seems to me they have already found them; and based on the older Maximus’ words it would seem that searching out their true source of creation may prove a deadly mistake.

I was surprised to see Noh-Varr in the role of the final Accuser.  It made for an interesting twist, but beyond that his showing up five thousand years in the future takes him out of dead pool that Ewing has set up for the cast.  Ewing stated at the onset that a cast member would die before their mission’s end.  Maximus and now Noh-Varr have been removed from the possible candidates of who is to die, leaving Medusa, Gorgon, Crystal, Flint and Swain.  Gulp!

This issue is a bit thick, heavy on exposition and possibly difficult to penetrate for those who are unfamiliar with Hickman’;s Fantastic Four run.  Yet I very much enjoyed it and cannot wait until the next installment.  Definitely recommended, Three and a half out of five Lockjaws.