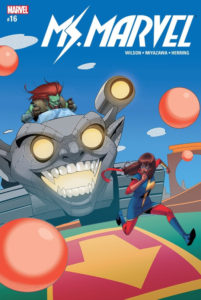 Kamala continues her battle with the mysterious Doc.X in today’s issue of Ms. Marvel, from the creative team of G. Willow Wilson, Takeshi Miyazawa and Ian Herring.

In the previous issues, Ms. Marvel has matched wits with a nefarious internet troll known as ‘Doc.X’ who somehow knows her true identity and possesses the ability to take over machines and people.  Kamala sought out the true identity of this troll only to discover it has no identity at all; it is an artificial intelligence, a renegade malware that somehow gained sentience and is now testing the limits of its capabilities by so bedeviling Ms. Marvel.

It turns out that Doc.X has been particularly intrigued by Kamala because she is the only person it has encountered that it cannot possess and take control of; the program assumes this must have something to do with Kamala’s Inhuman physiology.  Unable to hijack Kamala’s will by way of neural-computer interface or whatever, Doc.X has decided to manipulate her by way of a more conventional rout: blackmail.

Doc.X demands that Kamala download its program onto a thumb-drive and use her clearance as Ms. Marvel to bypass Shield’s security and plug it into their servers on-site.  This will allow Doc.X unlimited control over Shield’s hi-tech surveillance array, vastly augmenting its power and influence.  If Kamala refuses to do as Doc.X commands, then it will tell the world her true identity as Ms. Marvel, as well as send messages to her entire high school revealing Zoe’s secret crush on their mutual friend, Nakia.

It takes a moment for this to sink in and Kamala has a hard time bending her mind around Zoe being in love with Nakia.  Kamala has been so busy with her various duties as a superhero she hasn’t noticed how much Zoe has changed of late.  Revealing this to the whole school would be hugely embarrassing it both Zoe and Nakia; it could ruin their whole lives.

Kamala cannot devise a way around it.  Putting her own life at risk as a hero is something she can deal with.  Risking the lives of her family and her friends, however, is all but overwhelming and she has no choice but to relent to Doc.X’s command.

The next day Ms. Marvel travels to Shield’s East-coast hub, The Triskelion, intending to go through with the dastardly scheme and plug the copied Doc.X file onto the protected mainframe.  She is met there by Sub-Director Phil Coulson whom she had previously become friend with (by way of their mutual love of fan-fiction).  There’s also a rare Monica Chaing cameo which is very much appreciated (we haven’t seen her since the conclusion of Avengers A.I.).

Coulson is blissfully unaware of the high treason Kamala is about to commit.  His total trust in her is more than enough to push Kamala over the edge, causing her to change her mind.  She just cannot do it.  She cannot give in to Doc.X’s demands, can’t let him bully her into doing his insidious bidding.  Being a hero is about making the hard choices and taking the right path, even if that is the one that scars you the most.

Kamala rushes from the Triskelion and b-lines back to Jersey as fast as she can.  It will only be a matter of time before Doc.X outs Zoe’s secrets and Kamala wants to warn her ahead of time.

Zoe takes it all surprising well.  She knows Ms. Marvel has made the right choice.  A former bully herself, she knows that giving into a bully only makes things worse.  Besides, she cannot keep her secret any longer.  She needs to tell Nakia how she feels.  Zoe has little hope that Nakia may feel the same way toward her, but all the same she needs to let her know and needs to do it on her own terms.

Ms. Marvel is impressed by Zoe’s bravery and comments on how she understands just how frightening the prospect of being ‘outed’ can be.  Kamala is actually referring to her being outed in terms to her secret identity, but it leads to a rather funny scene where Kamala has to stumble through the very awkward process of saying she’s not gay… not that there’s anything wrong with that.

Emboldened by Zoe’s bravery, Ms. Marvel seeks out a secluded area, devoid of any machines that might be taken over and used against her, and contacts Doc.X, telling the troll that she will not be controlled.  Doc.X can do as it pleases, spill her secrets to the world.  She will not bow down to the bullying!

Elsewhere, the narrative switches to a rather touching scene where Zoe divulges to Nakia the feelings she has for her.  Nakia is surprised by this revelation, but not dismayed.  She thinks that Zoe is wonderful and is very proud of how she has been able to shed the confines of who she feels she is supposed to be and become who she truly is.  Nakia doesn’t feel the same way toward Zoe, but she will never stop being her friend and will have her back no matter what.
A part of me was definitely hoping Nakia was going to reciprocate Zoe’s affection, but I suppose this is more realistic and it makes for such a moving and sweat vignette.   I have to imagine there are many readers out there who will find a great deal of encouragement and perhaps even guidance from this terrific scene.

Meanwhile, Kamala is desperate to find help in defeating Doc.X.  She needs a technical expert, but doesn’t have many options.  Tony Stark is in a coma, Kamala doesn’t really know Riri Williams yet, nor does she fully realize the genius of Lunella Lafayette…  There s only one person she can turn to: Bruno.  Kamala tracks him down and telephones Bruno in his dorm room all the way at his new school in Wakanada.

Bruno is icy toward Kamala, not yet ready to forgive her for all that had happened during the events of Civil War II, but he is willing to check out the data Kamala emails him regarding Doc.X.  Right off the bat, Bruno notices something quite odd in the code.  Every time it recycles itself it adds novel information.  It is absorbing new data and adding it to itself.  It is learning.

Kamala realizes something.  Doc.X is not just learning, it’s learning from them, from the younger internet users it has been so obsessed with.  The near unlimited curiosity and equally unlimited pettiness of these users has shaped Doc.X, empowered it and made it what it is.  And Kamala feels sure that this is the key to defeating it.  How exactly Kamala plans to do this remains to be seen, for it is here that the issue ends with the promise of conclusion in the next installment.

There is a quick scene at the beginning of the issue that explores Doc.X’s origins.  It started out as a complicated fishing program developed by an unscrupulous coder working for the ‘World of Warcraft’ analog that Kamala and her pals play.   The malware is designed to spread from player to player, adapting and altering its functional parameters in accordance to the behaviors of the players it infects.  The coder sees it all as some kind of social experiment, creating an artificial intelligence cultivated by the hoards of nasty, ultra-competitive, hugely insensitive ‘pooplords’ who pervade the internet.

Doc.X’s origin tale is kind of reminiscent of that of the slasher movie villain, Freddy Krueger, from the Nightmare on Elm Street series.  Freddy’s gruesome beginnings entailed a young and innocent nun who was accidentally locked inside of an asylum for the criminally insane.  The poor woman was assaulted by the various maniacs and murderers and later discovered she was pregnant, her son the progeny of countless madmen.

Doc.X’s own inception is slightly the same, only instead of being sired by the criminally insane, Doc.X is the product of thousands of the worst internet trolls, flame-baiters, meh-throwers, snowflake smashers, and cyberbullies that the world wide web has to offer.

Faceless anonymity is often a huge factor in what leads people to often be so nasty on the internet.  People say things from the safety of distance and obscurity that they would never say in a face-to-face encounter.  While this can sometimes be liberating, it is also easily abused and someone who is normally conscientious and sensitive can sometimes end up becoming total jerks online, not entirely aware of just how hurtful and damaging their actions can be.

Doc.X is something of a manifestation of this careless and faceless animosity.  And it may be that the only way to fight such a thing is to be true to oneself and unafraid to be honest about your feelings.  The threat Doc.X poses to Zoe loses its power once she tells Nakia how she feels.  Both Zoe and Nakia may be mortified were Doc.X to forward all of Zoe’s love letters to the student body.  Yet what really matters is that the two will still be friends and whatever jeers may come from their classmates will soon wilt once Zoe stands firm, shows that she is proud of who she is and that Nakia has her back.

Of course all this is much more easily said than done.  Someone Zoe’s age barely knows who they aremuch less how to be true to oneself.  What is important, however, is that Zoe did not suppress her feelings… she let them in and accepted them… even though they were confusing and embarrassing.  And this ultimately empowered her.
It’s a great model for how to stand up to bullying.  It’s never about gaining the acceptance of the bully, but rather an acceptance of oneself…

At risk of sounding like a broken record: another fantastic issue.  The writing, illustration and coloring merge just wonderfully together with Wilson, Miyazawa and Herring each firing on all cylinders.  I had initially thought that this whole Ms. Marvel versus an internet troll story-arc was just going to be a lark, a breezy and fun tale to balance out the intensity of the previous, Civil War II story.  Yet it has proven to something entirely different.  Still fun, but also hugely poignant… possibly the most powerful of the Ms. Marvel tales to date.