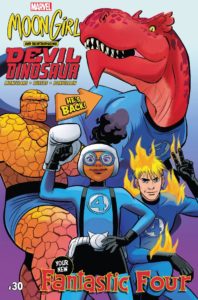 Here’s the situation: the evil Super Skrull has come to earth and created a terrible machine with stolen components.  This device is a kind of de facto Omniwave Projector, an ultra-powerful particle accelerator that can create a doorway to an antimatter universe.  Somehow, The Super Skrull has learned that creating such a doorway would beckon the arrival of the Omnipotentis, a being of unlimited destructive power that will destroy not only the earth, but the entirety of the universe.

It’s the sort of crisis that used to be right up the Fantastic Four’s alley.  Unfortunately, the Fantastic Four isn’t around anymore.  And hence it has fallen on Lunella Lafayette petit shoulders to create a new Fantastic Four and find the perfect balance of brains, brawn and heart needed to stop the Super Skrull and save the day.

To this end Moon Girl teamed up with the remaining members of the FF – Ben Grimm, the ever-lovin’ Thing, and Johnny Storm the hot-headed Human Torch.  They proved a formidable squad yet were unable to prevail.  There was something missing.  They lacked cohesion and couldn’t work as a team.  They were unable to recreate that inexplicable magic of the original Fantastic Four wherein the team became greater, more powerful than the sum of its individual parts.

Why this didn’t work was confusing to Lunella.  It was like a math problem wherein the solution was anything but mathematical.  Yet she finally figured it out and realized that the missing ingredient was her former partner, Devil Dinosaur!

A plan was put in motion.  Moon Girl was able to coerce Galactus, the former consumer of worlds, to fight off Omnipotentis and buy her and her team time to take out The Super Skrull’s machine and close the portal.  Meanwhile, Lunella was able to tap into the energies created by the Super Skrull’s machine to fuel her own Omniwave Projector, which she used to travel back to the alternate dimension where she had left Devil Dinosaur.

They returned and the team was whole.  Now it was clobbering time and they took on The Super Skrull.

A good-old-fashioned super battle ensued as this new FF took on the Super Skrull on the Brooklyn Bridge.  The Super Skrull is a tough customer.  He’s more than a match for The Fantastic Four in any of its iterations; yet the team has always found an x-factor that stepped in, swayed the battle and saved the day.   Something about their unity, they’re being bigger than the sum of their parts allowed for such an x-factor to step in.  And Lunella was successful in recreating the formula.  And that x-factor stepped in a very literal fashion as Devil Dinosaur actually stepped on The Super Skrull, catching the villain off guard and squashing him under the dinosaur’s giant foot.

With the Super Skrull defeated, Ben and Johnny were able to turn off his machine and cause the vortex between realities to close.  Lunella quickly flew off to the gateway between realms to tell Galactus and the Silver Surfer to disengage their battle with Omnipotentis.

Defeated, Omnipotentis offered discouraging words to our hero.  She said that Moon Girl and the others may have won for now, but she will be back… nothing can prevent entropy in the grand scheme.  The universe will not last forever, it will eventually die just as all things die… a harsh truth sewn into the nature of reality.  Lunella takes these harsh words in stride.  Basically sticking her tongue out at Omnipotis and telling her, better luck next time.

The day is saved and it’s all thanks to the new Fantastic Four.  Ben and Johnny are more than ready to go on to the team’s next adventure, but Lunella realizes that it is not to be.  The whole ordeal helped Lunella realize that she was not whole without her partner, Devil D… and that the same is true for Ben and Johnny.  Their family is somewhere out there and it is long past time that Ben and Johnny go about finding them.

The two are saddened that Lunella is breaking up the team, but they both seem to realize that she is right.  Reed, Sue and the kids are out there somewhere and it is The Thing and The Human Torch’s destiny to find them and re-attain wholeness.  An adventure that is currently unfolding in the pages of Marvel Two-in-One.

Lunella and Devil D return to the Lower East Side.  Finding a quiet playground to rest, Lunella apologizes for her having left Devil D in the first place.  She had thought she was doing the right thing, that the prehistoric reality she had found for him was where he belonged.  He tried to tell her she was wrong, but Lunella didn’t listen and for that she is sorry.  Manhattan is no place for a Dinosaur… except for when it is.  Moon Girl and Devil Dinosaur are partners, they were meant to be a team.  It took Lunella being without him to realize that she is better when with him… that together they become greater than the sum of their parts.  Sometimes you have to do things on your own, but it’s always better to have someone their to support you.

There is not a lot to unpack or analyze here.  The moral of the story is made abundantly clear.  It is a base truth that independence and self-agency is a matter born out of healthy dependence and the capacity to rely on others.  Being as smart as she is, Lunella often feels that she doesn’t need to rely on anyone but herself.   And time and again, her experiences teach her that she is better when can rely on others.  Mutuality is not a crutch that one leans on and inhibits growth, rather it is a scaffolding that supports and fosters such growth.

Lunella sums the matter up aptly in her narration of the action unfolding.  Stating, “Sometimes you’re your own.  But when someone os looking out for you? Those are better times.”

Where was Lunella way back when I was writing my dissertation?  The above is as succinct a summation of the general concept of the theory of psychological object relations as one is likely to find…

There is, however, a more furtively planted thematic in the story… an element of existentialism sewn stealthily into the narrative.
In my capacity as a child psychotherapists, I’ve worked with quite a few highly capacious kids.  Being exceptionally smart is a gift, but it is not without its costs.  Children who are especially smart can often also exceptionally anxious.  They know things on a cognitive level before they have developed the faculties to cope with such knowledge on an emotional level.
And even when you have those faculties, there is a kind of knowledge that no one really has the ability to cope with.  The Omnipotentis is correct.  All things do come to an end.  Every thing is finite and, though it is billions of years in the future, the eventual heat-death where the entire universe comes to an end is an inescapable inevitability.
The harsh, existential truth of our own mortality, of the fact that everything has an end, can be a difficult abyss to stare into.  No one has the ability to fully deal with it.   One really have only two choices: you can either give in to nihilism (as the Super Skrull had) or you just thumb your nose at the matter and basically say that you’re going to go on anyways (e.g. Lunella’s parting words to Omnipotis).

As always, the art by Natacha Bustos and Tamra Bonvillain gels wonderfully with the script, bringing the story alive with vibrant action and rich colors.  As far as I’m concerned these two can illustrate the Fantastic Four any day of the week.  I especially enjoyed the cosmic battle between Galactus, the Silver Surfer and Omnipotentis.  It acts as a wonderful homage to Jack Kirby while remaining true to Bustos and Bonvillain’s individual styles.

What a great ride.  Fantastic Three stands right alongside Cosmic Cooties as being my favorite Moon Girl and Devil Dinosaur tales.  And I’m so glad that Devil D is back.  I knew it would be only a matter of time before the big red lug would be back.  But I really missed him nevertheless.

Oh yeah, and there’s a really nice letter printed in the back pages.  Whomever that guys is who sent that letter in seems like he’s pretty cool (wink wink).

Four out of Five Lockjaws for the issue…

…and Five out of Five Lockjaws for the arc as a whole.  Highest recommendation!