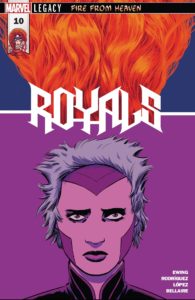 The Royal squad have finally made it to the mysterious World Farm, the hone of the god-like Progenitors; yet meeting their makers does not prove to be peaceful affair.  With script by Al Ewing, pencils by Javier Rodriguez, inks by Alvaro Lopez, and colors by Jordie Bellaire.

Retracing the trajectory of a SkySpear, the Inhuman spacecraft, The Asterion, has ventured deep into the unknown regions of the cosmos and finally come upon the incredible sight of the World Farm.  This farm is something of an artificial solar system, with numerous planets encased in synthetic orbs, connected to each other and encircling a larger planet at its center, acting as a sun with its blazing furnaces.  It’s a rather difficult speckle to try and describe… in short it looks like this:

Coming into range of the closest of these artificial planets, a Harvester Class Progenitor becomes aware of the approaching Asterian and forces the craft to come to an immediate halt with a mere gesture of its massive hand.
Within the Asterian, young Flint is continuing to go through some strange type of transformation.  His laying hands on the SkySpear on NovaHala has clearly had a dramatic effect on him.  His hand and now forearm has become encase in some kind of crystalline substance, translucent so that the bones of his hand and arm are visible.

Furthermore, what Flint has gone through seems to allow him to sense the Progenitors’ intentions.  He realizes the Harvester Class Progenitor has identified them as a foreign body and potential threat to its crop.  Realizing their ship is about to be destroyed, Flint acts quickly and emits from his hand a giant crystal orb that contains him and the other, protecting them as the Progenitor’s gesture causes the Asterian to explode.

Medusa issues orders quickly and the others follow her command.  Crystal uses her powers to create a breathable atmosphere within the orb; Flint hurdles the orb itself toward the main planet of the farm; and Noh-Varr utilizes his pocket battlefield to protect them all from the impact of the crash.  All of this is just wonderfully depicted in a great splash page from the art team of Rodriguez, Lopez and Bellaire.

They crash land into the bowls of the main planet, finding within it a strange realm of artful structures that seem to be some kind of combination of botany and technology.   The air is breathable, but tastes odd.  The strain of his actions has caused Flint to pass out… more alarming, the crystalline substance that had grown over his hand and arm appears to be spreading, it has spread over half his body exposing and making visible the bones of his skeleton.  As gruesome as it appears, it doesn’t seem to be causing him any pain and there isn’t time to fully take in or address what exactly is happening to him.

Noh-Varr had touched the SkySpear on NovaHalla as well.  Though it did not effect him as profoundly as it has Flint, Noh-Varr is able to understand the nature of this strange world to a heightened degree.

The World Farm appears to be both organism and machine, an intricate computer made up of organic hardware brought to life by a liquid blood composed of trillions of quantum processors, mini-computers the size of molecules.
The whole planet is a computer, it is alive and aware and it can certainly detect the presence of foreign bodies.  The Progenitors are aware that The Royals have survived and know exactly where they are.  As if on cue, an Ordinator Class Progenitor arrives to eliminate the unwelcome guests.

Like the World Farm itself, the giant Progenitor appears to be both organism and machine, a giant anthropomorphic mechanism with a floating orb in place of a head.   The Ordinator Class Progenitor acts something like a maintenance program, identifying errors in the code and attempting to eliminate such errors so that the system as a whole will run as it should.

The Royals run from this colossal being, the others dashing off as Gorgon carries the unconscious Flint.  Crystal uses her elemental powers to cover them, erecting a wall of rock and sediment between them and the Progenitor.  The Progenitor tears through this wall and fires a laser beam from its eye that strikes her near the ankle.

Crystal continues to fight, using her powers to take control of the air and moisture around the Progenitor’s head, compressing it to blind their attacker and take out its laser-firing eye.  Medusa takes up her injured sister assisting her as they all continue their desperate effort to escape.

Maximus, meanwhile, has had enough of running away.  These beings are androids, but they nonetheless have brains… minds made up of artificial tissue and liquid processors.  Maximus has been manipulating minds for as long as he can recall and he feels confident that he can seize control of a bio-mechanical mind with the same effect as he can an organic mind.

Yet as Swain points out, their mutual powers act to cancel each other out, that Maximus is left powerless as long as Swain is in his proximity.  Maximus disagrees, arguing that their powers only nullify each other because they don’t act in concert.  Maximus can manipulate cognition whereas Swain manipulates emotion; he is ego whilst she is id.  All they have to do is work together and their abilities will be enhanced rather than canceled out.

Swain agrees to give it a shot and the two work toward aligning their powers.  It is a struggle at first, but soon Max’s supposition is proven correct and their two powers act as a sort of potentiate, becoming much more powerful than the sum of its two parts.  Together, Max and Swain’s consciousnesses reach out, they can feel the enormous mind of the World Farm, its near endless physical structure akin the neural pathways of a brain.

They could become lost in the vastness of it all, but Maximus orders that they focus themselves on the workings of the Ordinator Class Progenitor that has been pursuing them.  They concentrate their psychic connection on this being and Maximus squeezes his fist.  It is too much for the Progenitor and its orb like head implodes.

The threat has abated, but only for the moment.  Elsewhere on The World Farm, the whole ordeal has been monitored by the Overlord-Class Progenitor and its enforcers.

The Overlord reaches its hand forward as if to make a decree and utters a single phrase: ‘End/Threat.’  And it is on this ominous note that the issue comes to an end with the promise of continuation int he next installment.

There’s a lot of cosmic, high-concept stuff at play here.  And while learning more about the Progenitors and the way-out coolness of the World Farm is hugely interesting and fun, it also acts to sort of swallow up the characters; the neat development we have been seeing for Medusa, Gorgon and Maximus takes a backseat as The Royals are essentially fellow passengers in this wild ride of exploring the World Farm.

One of the things I have been the most interested in is how The Progenitors were going to be differentiated from The Celestials.  At first blush, the two seemed to be quite similar, yet Ewing and company do a nice job of showing off the differences.   Whereas The Celestials are space gods in the mold of Erich von Däniken-style astro-theism, The Progenitors seem to be machines that have hyper-evolved… developing into a techno-organic conglomerate that proliferates by way of growing itself like sewn and harvested crops.   It’s an exciting concept, kind of a combination of Stanisław Lem’s Solaris and the planet, Cybertron from the old Transformers cartoon.

I’ve no idea whatsoever how The Royals can possibly stand a chance against such an overwhelming power, much less how they can hope to obtain a new source of Terrigen from these near-omnipotent beings.  My best guess is that it all has to do with the alarming transformation that young Flint is going through.
It would seem that Flint has bonded with the crystalline material that makes up the SkySpear, that it is changing him as well as likely augmenting his powers.

It’s rather clear at this point that Flint is destined to become the Moon King, the powerful and monstrous being that Maximus and Noh-Varr seek out some five thousand years in the future.  This also makes it seem pretty certain that Flint will be the member of the team who doesn’t make it back.  It’s not that he will die, but rather he will become transformed into something huge and unrecognizable from his former self.  It’s all quite cool, but also saddening in that this turn of events will essentially take Flint off the table for… well, forever.

Rodriguez, Lopez and Bellaire work wonderfully together in bringing to life this wild and bizarre world, an amalgam of biological and technology awash in shapes and colors that are totally foreign and alien yet in tune with its own, unique sense of natural.  The World Farm is a welcome addition to the cosmic locales of The Marvel Universe and I’m very much looking forward to seeing how The Royals might manage to survive this adventure.

Once more, as much as I enjoyed exploring this wild alien realm, I would have liked to have seen a bit more from the characters themselves.  The dialogue leaned a bit on exposition as Noh-Varr and Maximus explained their theories about what exactly the World Farm might be.
The issue moved at such break neck speed that I didn’t really get the chance to take in what is happening to Flint, how exactly Maximus and Swain managed to combine their powers, what the deal is with Gorgon’s aching back, or how being so close to the Primagen might be effecting Medusa’s illness.
Of course, it’s also entirely possible that I just read the issue too fast in that I was so curious and excited to see what was to happen :3
Definitely recommended.  Three and a half out of Five Lockjaws.