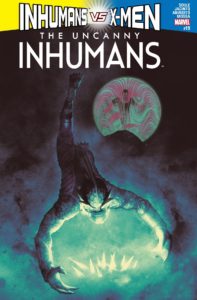 The penultimate issue of Uncanny Inhumans and a continuation of the IvX tie-in from the creative team of Charles Soule, Ario Anindito, Kim Jacinto and Java Tartaglia (with another awesome cover from Fraizer Irving).

There’s nothing good ol’ Maximus loves more than chaos.  And with his fellow Inhumans embroiled in a war with The X-Men, Max has found the perfect opportunity to stir the pot and sew further mayhem.  It’s not yet entirely clear what the mad prince has up his sleeve, but it’s certain to entail a good deal of hurt feelings and and property damage.

Utilizing Lineage’s powers to commune with the sentience of ancient Inhumans, Maximus has learned the secrets of engineering artificial Terrigen Crystals.  It is the shortage of Terrigen, coupled with the fact that The Terrigen Cloud has proven poisonous to Mutants, that has led to the Inhuman/Mutant war.  Maximus’ plot to create a new source of Terrigen may, in concept, bring about an end to the conflict… at least that is what he has told Triton in recruiting the banished Inhuman into his schemes.  What exactly Maximus has in mind, his ulterior motives, however, remain to be seen.

The issue begins off the coast of Vietnam where the unlikely team of Max, Triton, Lineage and The Unspoken begin their venture to collect the various components and ingredients necessary for engineering Terrigen Crystals.

Maximus presents it all as some sort of heroic journey, yet the endeavor does not seem to have anything to do with heroism.  Triton is there because he seeks redemption for his crimes; The Unspoken is seeking Terrigen because of the awesome powers it endows in him; Lineage is merely looking for the opportunity to stab Maximus in the back and seize power; and Maximus appears to be simply interested in it all for kicks.

Plunging far into the depths of the South China Sea, the team comes across a gapping maw on the seafloor that is actually a mouth leading to hidden kingdom of undersea creatures.  Triton and the others have to fight off an army of these monstrous crustaceans as they proceed further on.

The Unspoken grows increasingly bemused by the situation.  It’s not only that the affair has ruined his six thousand dollar Ferragamo loafers, but Maximus’ continued disrespect rankles The Unspoken as an effrontery to his status as royalty.  He reminds Maximus that he had been the King of The Inhumans and demands that he be treated as such.  Maximus is unmoved by the threat, yet acknowledges that he is quite aware that The Unspoken is indeed a king.

The team makes it further into this strange realm and eventually come across the court of the creatures’ queen.  It turns out that the roe this queen produces, her eggs, are a key ingredient in creating Terrigen and Maximus has come to bargain for a cache of this roe.

The Queen (who oddly enough speaks English) is suspicious of Maximus’ intentions.  What could he possibly have to offer that would incline her to trade away her precious roe?  Well, it proves that Max does indeed have something she wants… something every queen needs, a king.  Maximus offers The Unspoken, a true king, as the queen consort in exchange for the roe.

It’s not clear if Maximus is using his psychic powers for manipulation, but the queen accepts his offer.  What is clear, however, is that Max very much has to use his powers to coerce The Unspoken to accept the bargain as well…

The Unspoken is left behind to a fate befitting his lousy character and the others leave with their prize in toe.

The ‘heroic journey’ continues on, taking them all over the globe as Maximus collects more of the rare components needed to create Terrigen.  It turns out that a good third of these ingredients are unnecessary and Maximus has had the squad collect them simply to keep them guessing and maintain his being the only one who knows the recipe for Terrigen.

They end up in Mumbai, where Maximus procures the final ingredient.  They are met there by Banyan, an Inhuman villain Maximus had reached out to in the previous issue.  Max has instructed Banyan to make preparations, assemble some sort of machine that can be used to combine the ingredients they’ve collected and transfer it all into Terrigen.

Maximus asks Banyan for word of the Inhuman/X-Men War and Banyan replies that it has been waging on worse than ever.  “Excellent,” Maximus says.  “For you see, my friends, it is times of greatest adversity that gives rise to the greatest of heroes.”

He then goes on to add, “for example…”  At which point the scene shifts back to the shores of the South China Sea where a large prawn-like monster arises from the depths and makes its way to land…

And it’s with this bizarre, unexpected and unexplained turn that the issue comes to an end with the promise of being concluded in the next (and final) installment of The Uncanny Inhumans.

Well, that was different…
A fun albeit silly ride.  And the silliness of it all leads me to believe this arc will not have a significant impact on the overarching storyline of IvX; that rather it’ll be self-contained and not a central element to the conclusion and resolution of the Inhuman/X-Men War.  But that’s not to say it isn’t worth reading.  Writer, Charles Soule, really excels at scripting Maximus; offering the character an irreverent and manic charm that is terrific fun to read.  And there are a number of especially funny scenes… though it is Lineage who gets the best line of dialogue.

Laughs aside, I’m growing increasingly concerned over Triton’s fate as this chapter of the Inhumans mythos comes to an end.  His quest for redemption has a strong tragic air to it, offering credence to the notion that he may be heading toward some sort of heroic, self-sacrifice in order to finally redeem himself.

I kind of hope this is the last we see of The Unspoken.  He never clicked for me as a satisfactory villain for The Inhumans.  The fate that befalls him in this issue, married off to the grotesque prawn queen, is rather befitting and I kind of hope this proves to be his ultimate fate (although I doubt it).

Really no idea what to make of the last scene.  Has the Crustacea Kingdom sent some sort of monster to bedevil the land-living world?  Is this related to the Monsters Unleashed event?  Is it all a promotion for the restaurant chain, Red Lobster’s never-ending shrimp offer?  Time will tell…

This odd cliffhanger ending notwithstanding, Uncanny Inhumans #19 is a madcap romp and very fun read.  The art by Ario Anindito, Kim Jacinto and Java Tartaglia is extremely well done.