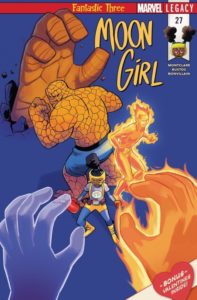 The real life fantastic three (Brendon Montclare, Natacha Bustos and Tamra Bonvillain) continue the tale of the fictional fantastic three (Lunella, Johnny and Ben) in this 27th installment of the always-fun Moon Girl and Devil Dinosaur.

Being the smartest person in the world can be difficult and it can often create situations where one is constantly exasperated by the lack of capability demonstrated by those around you.  This has been a difficulty Lunella has had in abundance ever since Benjamin ‘The Thing’ Grimm and Johnny ‘The Human Torch’ Storm has entered into her life.  The two had merely dropped by Moon Girl not-so-secret secret lab to offer up some of Reed Richards’ old gizmos  and all manner of chaos has ensued ever since.

A villain utilizing the various powers of the Fantastic Four has been thieving valuable items all about the city… ultimately leading to The Thing being arrested.  And to make matters worse, The Silver Surfer and Galactus have suddenly shown up on the Lower East Side offering up a dire warning that a terrible cosmic force known as The Infinity is coming to devour and destroy all of reality.  that ain’t good…

Things are looking pretty rough and it is time for Moon Girl and her new compatriots to get their act together and get it together soon.  Unfortunately, their first endeavor as a team, saving Zoe’s cat whose gotten herself stuck in a tree, ends up going rather poorly.

The trio just do not yet know how to act as a team.  Moon Girl is used to being a solo act or at least having Devil D as a dutiful assistant.  Whether he’d admit it or not, The Thing is used to be given orders and doesn’t do so well acting on his own.  And The Human Torch is as impulsive and reckless as it gets, always leaping before he looks.  They just don’t gel together at all and they make an absolute mess of trying to save this poor kitty.

Fortunately, Zoe’s cat is able to take care of herself, jumping from the tree and finding a suitable landing spot on Eduardo’s face.  And Zoe, Eduardo and the frazzled kitty run off before matters can possibly get worse…  Leaving the not-so-fantastic three realizing that they’re a good ways off from being the squad they need to be.

Lunella has not been keen on this idea of teaming up with Ben and Johnny from the start, yet it is clear that they need her.  The old Fantastic Four was unstoppable, a squad that saved the world more times than the Avengers,  X-Men and Inhumans put together.  Yet they are no longer whole.  Reed Richard and Sue Storm are gone and their absence has left Ben and Johnny adrift.  They need Reed’s brains and Sue’s sensibilities and, though it’s left unspoken, it’s pretty clear the two are hoping to find these missing qualities in Lunella.

Her annoyance notwithstanding, Lunella can relate to both Ben and Johnny’s needs as well as their sense of loss.  Furthermore, there’s a serious threat afoot in this rapidly approaching ‘Infinity.’  She’s going to need all the help she can get and decides to give the matter one last chance… but this time they’re going to do it right: with uniforms.  And with that the official ‘Fantastic Three’ hit the streets – evil-doer’s beware!

The trio make their way to the science pavilion where Galactus stands in waiting.  When they arrive they are greeted by the one villain they probably should have already expected: The Super Skrull.

The Super Skrull is a member of a shape-shifting alien race who has been endowed with each of the super powers of the Fantastic Four (Ben’s rocky strength, Johnny’s flame-power, Sue’s invisibility, and Reed’s stretching abilities).  Of course this has been the cad whose actions has caused the Fantastic Four to be suspected of crimes about the city.

But to what end?  Why has the Super Skrull come to earth to bedevil the Fantastic Three?  Is this Kl’rt, the original Super Skrull?  Last seen, Kl’rt was a good guy that assisted the heroes during in the Infinity Event…  Has something happened that’s led Kl’rt to once more become a villain?  Does it have something to do with the cosmic force now treating to consume reality?  These questions will have to wait to be answered in that the issue ends on this cliffhanging with the promise of continuation in the next installment.

Oh, and there is also a mysterious side-story running through the narrative involving the Fantastic Four’s old robot assistant, HERBIE.  A few issues back, Lunella had accentually switched HERBIE on and the pesky bot has been acting rather hinky ever since.

Originally, Richards had built HERBIE to act as a caretaker and playmate fro his son, Franklin, but now the robot is insisting that it actually has a very different purpose.  Indeed it insists its name is an anagram standing for ‘Highly Engineered Robot Built for Inter-dimensional Exploration.’  That’s a mouthful…

What might this mean?  In a previous issue, Galactus had intimated that it was Lunellas exploration into the inter-dimensional realm, looking for Reed Richards, that may have attracted the Infinity entity in the first place.  And now it’s revealed that perhaps HERBIE’s central functioning has to do with such exploration.  There are a lot of puzzle pieces at play here and I’m looking forward to seeing how they fit together.

And of course whatever hi-jinx HERBIE might be getting up to can only be made worse when the robot discovers the Doom-Bot head Lunella’s been keeping in her lab.  HERBIE and DoomHead together… you just know that’s going to lead to trouble…

While the narrative thrust of the tale could use a little fine-tuning, I just loved this issue… loving this arc as a whole.  I have so missed the Fantastic Four and getting to see the Fantastic Three in action has made for a wonderful balm over my sense of loss of not having a monthly FF comic to read.   It all but gave me chills to see the trio running down the street with their unstable molecule F3 uniforms!

Again, being the smartest person in the world can be difficult… and it can also be rather frightening.  It’s easy to confuse being ‘the smartest’ with being ‘the most capable.’  And Lunella must feel rather anxious that it is always going to land on her shoulders to get things done, to lead, and take on whatever new threat endangers the world.

As she has in the past, Lunella tries to sublimate this anxiety by being sassy, pretending that everything is beneath her… something she can roll her eyes over.  And yet her actions betray this false sense of confidence.  She may fool herself into believing that she’s joined the Fantastic Three for Ben and Johnny’s sake, but the truth is she’s doing it for her own sake as well.  Devil Dinosaur is gone and whether she’ll admit it or not, Lunella just doesn’t want to face these world-ending threats on her own.  She needs others as much as they need her and this has been a reoccurring thematic that Lunella has struggled to come to terms with for a while now.

Alitha Martinez did terrific work filling in for the pencil work for the previous issue, yet I’m very happy to see series regular, Natacha Bustos, back on art.  I love her art and in particularly love the way she draws The Thing and Human Torch.  Hyperbole aside, Ms. Bustos is right up there with Kirby and John Byrne as my favorite FF illustrators.
The facial expressions on the Thing are just priceless.  The bit where he is slurping up udon whist Lunella is badgering him with questions… classic.  I also appreciate that Johnny is shown as lithe and a touch androgynous… more of a puckish pretty boy rather than just another musclebound blonde nearly impossible to distinguish between Steve Rogers, Hank Pym, Clint Barton and the dozen other toe-headed Adonis’ of the marvel Universe.

Once more, Tamra Bonvillain kills it in the coloring department.  I love the way she utilizes a different primary hue to distinguish the various story-arcs.  ‘World’s Smartest’ was unified by an overarching blue hue; ‘Girl-Moon’ had a purple hue; and this arc has had an orangish, earth-tone hue.  It’s a neat trick that acts to augment the the distinctions between the themes and whatnot of each arc.  Cool stuff!

The truth of the matter is that I’m completely ill-qualified to offer up an unbiased review of this book.  I love Moon Girl and I love the Fantastic Four and it’s impossible to not read this issue, this arc, without giant heart-eyes obscuring any sort of critical evaluation.
Moon Girl and Devil Dinosaur is one of the comics I share with my nieces and nephew.  They’re always excited to receive the latest issue and it usually results in chaos as they argue over who gets to read it first… it’s been no different with the last two issues.   Anyways, the other day I was over at their home having a beer with my brother… and I looked over into the other room just in time to see my niece leap from the couch shouting ‘Flame On!’  It absolutely made my week :3

Oh, and lest I forget, the issue also includes a set of Valentine cards for us to share with our sweethearts and loved ones!  Bust out your safety scissors, kids!

My clear, overwhelming bias notwithstanding… definitely recommended; Five out of five HERBIEs!