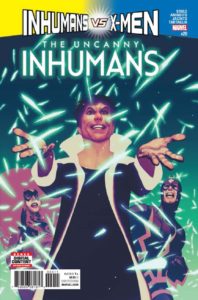 It’s the grand finale, with the twentieth and final issue of Uncanny Inhumans, a post script to IvX, and Charles Soule’s last (just for the time being hopefully) Inhuman story.  With art by Ario Anindito, Kim Jacinto and Java Tartaglia and covers by Declan Shalvey and Frazer Irving.  Full review and recap following the jump.

Maximus’ madcap adventure to create synthetic Terrigen Crystals has taken him and his gang all over the globe as the various components and ingredients for the formula have been collected (along with some extraneous, unneeded ingredients gathered merely to keep the recipe a secret).  Their journey has terminated in India where they are met by the Inhuman gangster, Banyan.  Bayan has recruited his former crony,  Kludge, who has built the mechanism required to combine the ingredients into artificial Terrigen.

Kludge, an Inhuman who is clinically insane and loves to build deadly machine and Maximus, who is also quite mad and very much appreciates deadly machines, get along famously and they start right to work on building the device that promises to produce synthetic Terrigen.  The others wait idly by, busying themselves by playing cards and watching old Bollywood films on television.

Lineage expresses concern that Maximus will do away with them, as he had The Unspoken, once they are no longer needed.  Triton returns that he has played along with Maximus only to the extent that he can produce the Terrigen; once he succeeds it will be Triton who will do the backstabbing, ending the threat Maximus poses once and for all.

Maximus and Kludge finally finish, only what they have created is not a Terrigen creating machine at all.  Rather it is a giant killer robot.
Max’s explanation is that simply making Terrigen is boring, something ‘Maximus the Mundane’ might do.  No, a giant robot is more is fashion and offers the others room int he cockpit as he takes the robot off to go squash this no good evil Mutants.

Before anyone can respond to this unexpected turn of events, the plant they’re work at is besieged by a ginormous aquatic monster… a mega-prawn that carries inside it The Unspoken and his would-be queen who have sought out to extract revenge on Maximus for his betrayal.

Unfortunately, the laser sword is actually powered by synthetic Terrigen, which The Unspoken is able to absorb and trigger his Inhuman abilities.  The Unspoken grows into a hulking version of himself, tearing Maxims’ robot in two with ease.  Max escapes the wrecked robot, crawling from its wrecked cockpit while continuing his warped self-narration, stating it is now up to him to save the day.

Banyan has had it.  Maximus’ plan to manufacture artificial Terrigen was meant to make him rich, yet all his investments have gone to this goofy robot.  He’s had it and lunges at Max.  Triton springs into action, fending Banyan off as Maximus focuses his telepathic powers on The Unspoken.  Lineage is quite surprised by the turn of events.  Triton had the perfect opportunity to turn on Maximus; why is he now acting to defend him?

The Unspoken’s Inhuman powers are quite impressive, yet his one glaring weakness is uncreative and, in the final analysis, rather dim.  As empowered as he is, The Unspoken’s mind is no match for Maximus’ telepathic manipulation.  Max is able to take control of The Unspoken’s will, causing him to fire off the Terrigen he has stored in him in the forms of force beams that shoot harmlessly off into space.  Depleted of this Terrigen, The Unspoken reverts to his former, enfeebled self.  Triton’s twin blades, meanwhile, has rendered Banyan into a harmless stump of his former self (un-fatal, however, in that he has shown the ability to regenerate his tree-like form with time).

Still monologuing, Maximus spins this clear defeat into a moral victory, stating that he chose not to produce artificial Terrigen because it is up to the Inhumans to finally learn to adapt and evolve on their own.  Truth be told, Maximus merely wants to keep his secret recipe for synthetic Terrigen to himself, making him invaluable to his people… offering him all the power and influence he so desires.  And it is for this that Triton chose to defend him rather than allow Banyan to kill him.  As long as Maximus possesses this secret he remains untouchable…

And it is here that this silly, unnecessary but nonetheless fun tale comes to a close.   With what will eventually happen to Maximus and his goon squad left to be addressed in the pages of next month’s Inhuman Prime.

The issue ends with an epilogue, tying off the events of IvX.  Medusa and Black Bolt are meeting in the Quiet Room.  Whatever procedures the X-Men had used to nullify Black Bolt’s voice are gradually wearing off.  In the meantime, however, it offers the two the rare opportunity to talk with one another.

They discuss all that has transpired, the war with The Mutants, the destruction of The Terrigen Cloud, and  Medusa’s abdication of the throne.  Medusa also looks back on all that has happened to them, the various trials and adventures they have faced, the battles they won, those they lost and the new challenges that their people now face.

Medusa asks Black Bolt bluntly if he had any knowledge that The Terrigen Cloud would prove fatal to Mutants.  Black Bolt offers an emphatic no; he never considered that the cloud would change in this fashion and he would never have triggered the Terrigen Bomb had he known that it would have resulted in so many Mutant deaths.

Flagman arrives and escorts the two to a banquet room where many of their colleagues have gathered to offer one last gesture of thanks and gratitude to their former queen.  Medusa counters their sentiment, tasting instead to the future and all that it may hold for them.    And it is here that the issue and the entire series comes to its conclusion.

Well, that was… something.
This three-issue tie-in to IvX did not really have much to do with the war between the Inhumans and X-Men at all, but was rather just a silly adventure.  Although its lightness and humor offered a nice counterbalance to the grave heaviness of IvX.  It’s true saving grace is that writer, Charles Soule so excels at scripting Maximus.  He channels Max’s unhinged and manic glee just wonderfully; and  Ario Anindito’s illustration with Max’s wild eyes and contorted features pairs perfectly with he dialogue.
The story is kind of a waste in that it could have been used to shore up the significant plot holes in IvX.  Instead we got an irreverent romp with a goofy giant robot and an even goofier giant sea monster.  And yet it’s forgivable in that Max and his let’s-go-ganging gang is so much fun to read.

Less fun is the epilogue scene.  It’s a nice recap of the series as a whole, yet Jacinto’s illustration is rushed and Medusa and Black Bolt’s discussion regarding the Terrigen Cloud proving deleterious to Mutants left a bit of a bad taste in my mouth.

There was a good deal of revisionist history in the ways in which IvX wrapped up.  The plot was tweaked in a fashion to exonerate the Inhumans’ culpability over all of the Mutants who had died due to Terrigen poisoning.  This is fine in and of itself, but it is also a bit antithetical to who The Inhumans really are.  The Inhumans, the Royal Family and those of Old Attilan, were never meant to be traditional superheroes with noble, lawfully good values.  They’re not evil, but they’re not good either; just different.  Medusa’s reframe that ‘an Inhuman’s right to go through Terrigenesis is not worth a single Mutant life’  is both contrary to her actions in the past as well antithetical to the true values of her people.  And Black Bolt’s statement that he would never have triggered the Terrigen Bomb had he known what it would do to Mutants seems… well, let’s just say I don’t believe him.

It seems to me that editorial wanted The Inhumans to look more heroic and sympathetic in the wake of IvX and Soule played along.  Not only did the attempt not work, it feels untrue to who The Inhumans are and what makes them so interesting to read about.

This gets at the root of the challenge Charles Soule has had to deal with throughout his tenure on Inhumans.  At this point I feel confident in positing that Matt Fraction left the book because Marvel very much wanted the Inhumans turned into ersatz X-Men and that was something he had no interest in.  Soul was brought on board last minute to fill in for Fraction and likely given the same assignment.  He did as asked, but managed to do it in a way that retained the true essence of who The Inhumans are.

Soule made The Inhumans into more traditional superheroes, but also held onto that key alien and unsettling quality hat makes them unique… balancing more conventional superhero tropes (Inferno’s origin and Linage’s dastardly schemes) with the outré weirdness more expected of The Inhumans (Reader’s origin, the introduction of Ennilux and the squad’s battle with Kang).

Some aspects worked quite well, with he addition of a bevy of great new characters and the rich development of Medusa’s character; while other parts didn’t work as well…  Soule’s version of Black Bolt is very much out of sync with my own impression of who the character is and Triton, Gorgon and Medusa spent too much time int he background for my tastes.   Not that I’m complaining, I grew up having to wait months, sometimes years, for appearances of my beloved Inhumans…  Getting new Inhuman books nearly every week has been all but an embarrassment of riches and I’m more than happy to take the good with the bad.

Rather than morphing The Inhumans into replacement X-Men, feared and hated for their differences, Soule took a different route and utilized the formation of New Attilan and its displaced populace of Inhumans as a metaphor for the immigrant/refugee experience in the West.   I feel that it worked quite well; as well as underscored how easily both he Mutants and Inhumans can coexist in the marvel Universe.   Tribalism, bigotry, cultural assimilation and xenophobia are matters easily big enough and important enough to be tackled in both The X-Men as well as The Inhumans

The whole Inhumans versus X-Men cross-over event ended up forcing the narrative in Uncanny Inhumans to streamline and consolidate so to fit in with the event’s plot.  A number of longstanding threads have thus been left unaddressed.  We still don’t know what the Sky Spears are all about; what young Ahura has planned as the leader of The Ennilux Corporation will have to be told later; and the romance between Medusa and Johnny Storm came to a conclusion in a quick, less than satisfactory fashion.  I have to imagine each of these matters might have been better addressed had Soule’s narrative not been forced to roll into IvX.

That said, Charles Soule’s tenure on The Inhumans has been wonderful and he has my great gratitude for steering these favorite characters into the uncharted waters of the big push to make them a more centralized part of the overarching Marvel Universe.

Whatever endeavors the future brings for Mr. Soule, I wish him the best of luck.  Welcome to the Astonishing X-Men, Charles, hope you survive the experience!

Two out of Five Lockjaws for the issue;

Five out of Five Lockjaw for the entire series