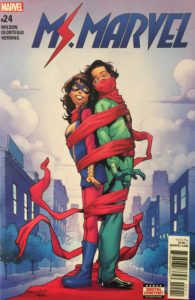 G. Willow Wilson, guest artist, Diego Olortegu, and colorist, Ian Herring, finish up this (somewhat) light-hearted mini-arc illustrating just how badly poor Kamala could use a break in the action.

In the previous issue, Kamala was surprised to discover that her family friend, Kareem, had come to Jersey City for a semester abroad.  Kamala had met Kareem when she spent a summer vacation in Pakistan… an eventful trip that saw Ms. Marvel teaming up with the hero of Karachi, the dashing Laal Khanjeer (or Red Dagger).  Obvs Kareem and this Red Dagger are one and the same, but it would appear that neither Kamala nor Kareem have put together the other’s secret identity.  A matter made even more incredulous when the Red Dagger showed up in Jersey City shortly after Kareem’s arrival.

Secret identities aside, Ms. Marvel and The Red Dagger are forced to team up in an effort to stop a slow-speed runaway train.  Acting in concert, the two were able to prevent a number of catastrophes but have yet to actually get the train to stop.
All manner of hi jinx ensues and the two heroes continue to do their best to keep the train and its passengers safe.  This involves Ms. Marvel pulling off some rather incredible (and implausible) feats… all of which leaves The Red Dagger all but babbling in amazement.

Ms. Marvel’s impressive skills abilities notwithstanding, The Red Dagger can tell that something is different in her.  She doesn’t seem to have that same zeal as when he first encountered back in Karachi; something has changed.  Whist continuing to protect the runaway train, the two heroes further their discussion and Ms. Marvel talks about how run down she has been feeling of late.  The events of the last few months have been pretty hard on her.  The battle against Doc. X and Jersey City being temporarily taken over by the bigoted, xenophobic Worthy Administration have taken quite a tole on her… further compounded by still missing her best friend, Bruno, and discovering her other childhood pal, Josh, had become the super villain, Discord.  Ms. Marvel has prevailed, yet it has all left her feeling tired and disheartened.

The bloom is off the rose, so to speak… Kamala had very much enjoyed being the new hero on the block and everyone’s darling.  But such a thing can only last so long and it’s been a hard landing as Kamala has had to contend with there being people out there who just don’t like her.  It’s proven quite taxing and The Red Dagger can tell Ms. Marvel has lost some of the skip in her step from when her first met her back in Pakistan.

The Red Dagger suggests that perhaps Ms. Marvel might take a break; take some time for herself, recharge her batteries and possibly regain a greater sense of purpose.  Ms. Marvel expresses reluctance toward such a prospect because Jersey City needs her.  Who would look after her town were she too take such a break?  Red Dagger counters that she basically won’t be doing Jersey City any favors by burning herself out.  There will be others to pick up the slack were she to take time for herself.  Ms. Marvel has a lot of friends; she just needs to rely on these friends and know they will be there for their town were she to take a much needed break.

This whole back-and-forth goes down as the two continue to keep the train safe and attempt to come up with some means of getting this runaway train stopped.    They finally come up with a plan, a bizarre, physics-defying plan and the day is ultimately saved.

And yet Kamala’s sense of being unappreciated and needing a break is further hammered home when the press arrives and seems much more interested in her dashing new partner and his fantastic hair.

Ms. Marvel walks off knowing that it is indeed time for a break… that she needs time to reflect, adjust and regain the sense of purpose that led to her to become a super hero in the first place.

This was a pretty fun mini-arc.  A touch light on plot, with he slow-speed runaway train being a bit of an on-the-nose metaphor for Kamala feeling like her life has gone off the rails.  In a different story, Ms. Marvel would have likely been able to ascertain a means of stopping the train within a page, page and a half tops, but prolonging the ordeal offered up a nice venue for Kamala to openly struggle with all the matters that have her feeling so down.

The hard time Kamala has had in contending with the mere fact that there are people out who just don’t like her reminds me a lot of the early tales from Lee and Ditko’s seminal run on The Amazing Spider-Man.  Spider’s angst over the Daily Bugles’ campaign against him acted as a great metaphor for the kind of alienation anxiety that many teenagers have to cope with.  This is similarly the case with Kamala, although with a significantly different edge to it.

Ms. Marvel and Spider-Man have a lot in common, but there are also some very important differences.  Not the least of which are the facts that Kamala is a girl, she is a person of color, and she is a Muslim.  She’s a Muslim living in America during a time in which our elected officials have been openly hostile and condemning of the entire religion as a whole.

Wilson and company have danced around this issue for a while now, creating a number of thinly veiled stand-ins… yet there can be no doubt that these real-life matters are certainly impacting the stories and themes Ms. Wilson has been creating for Ms. Marvel.

After the intense emotional weight of the Doc.X and Mecca story-arcs, I was hoping that this mini-arc might prove a lighter affair; a respite from these pressing matters.  And while the arc was indeed lighter in tone, the over-arching theme is something that really cannot be avoided.  It’s the kind of thing that always manages to seep in.  For far too many people out there, the specters of racism, sexism and religious intolerance are just unavoidable things… there is no respite.  And it stands to reason that this should be true for Kamala as well.

And I think it is smart of Wilson and company not to name these matters for what they actually are.  Overtly, Kamala is struggling with the simple fact that there are people out there who just don’t like her – leaving the ‘why’ they don’t like her kind of nebulous.  In the Marvel Universe, she may be disliked for being an Inhuman, for being a super-powered being, for just being different.  Yet the covert reasons are plainly evident for anyone to see.  And it all offers a sense of commiseration for anyone dealing with similar matters while not alienating any who are not.  It’s all a rather thorny matter, but one Wilson navigates it with deft precision… all the while adding in some great moments of levity to vent the tension.  (My favorite of which was Kamala’s bemusement over an unflattering photograph.)

Diego Olortegu does fine work illustrating the issue.  He is very talented, but I still feel not quite the right fit for this comic; and I’m very much looking forward to Takeshi Miyazawa return next issue.  Olortegu is given a tough assignment in being asked to illustrate the New Jersey landscape in a fashion that mirrors Kamala’s feelings… being a place that is both magical but also run down.  He does great work, but again I miss all the fun little details that Alphona, Miyazawa, and Leon would add into the illustration.  Still, this is all just a matter of individual tastes and, as always, Ian Herring’s colors do a fantastic job of maintaining the visual continuity and making this feel very much a Ms. Marvel comic.

Recommended.  Three out of Five Lockjaws.