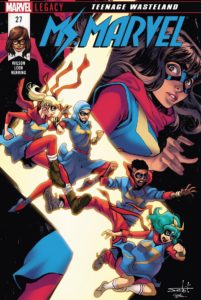 It’s the courageous Kamala Korps versus the dreaded Inventor as the Teenage Wasteland story-arc continues from the creative team of G. Willow Wilson, Nico Leon and Ian Herring.

Zoe is missing!  She had donned her makeshift Ms. Marvel costume and thought she could take on The Inventor on her own.  She’s been gone for a while now and her friends are quite worried.  Fortunately, Zoe is rarely without her phone and Nakia has the technical wherewithal to triangulate the global positioning system on Zoe’s phone and lead Red Dagger and The rest of the Kamala Korps to her location.

Not too far away, Zoe finds herself tied up alongside her codger compatriot, Roger, in The Inventor’s layer.  The narrative catches up with her just in time for The Inventor to go off on a rather standard issue super villain monologue.

The Inventor’s whole raison d’etre is all about the streamlining of society wherein the less useful members of the population are used as a source of much needed energy for those he deems worthy and useful.

In his first scheme, The Inventor had abducted a group of teenagers, seeing them as shiftless parasites on society better used as energy producing batteries.  He was foiled in this plot by Ms. Marvel in one of her first adventures.  Having recently been released from prison, The Inventor has modified his plans, now setting his sights on seiner citizens, whom he also sees as providing no value to society as a whole.
It’s a weird hang-up and, despite what The Matrix movies might have us believe, human bodies actually make for rather poor batteries.  All of that aside, The Inventor does possess a good deal of inventive prowess and has been able to use the various old folks he’s collected to power a bevy of oddly cobbled together monstrosities.

The Inventor’s monologue in interrupted by the timely arrival of The Dagger and the Kamala Korps.  Although these young heroes are a lot better at striking impressive poses than they are fighting monster and all manner of mayhem ensues as the Inventor sicks his creatures on the interlopers.  And herein we’re treated to a truly wonderful panel illustrated by Nico Leon and Ian Herring showing poor Gabe being chased be a mechanized pineapple…  it’s moments like this that remind me why I so love comics :3

Zoe is able to free herself and joins the fight just in time to heroically save Nakia from being zapped by a giant cyborg turtle.  It’s crazy…  When the dust settles, the heroes have saved the abducted senior citizens and The Inventor and along with many of his monstrous creations have escaped into greater Jersey City.
Although they saved the day, Red Dagger is forced to admit that they all might be a bit out of their depth.  They can fill in for the real Ms. Marvel when it comes to thwarting muggers and purse snatchers, but a legitimate super villain is clearly it of their league; they’re going to need some help.

And fortunately, Mike has an idea about how to get it.

Way back in the Civil War II story arc, Ms. Marvel had a terrible falling out with her hero and inspiration, Captain Marvel.  Captain Marvel’s effort to utilize the predictive powers of Ulysses to stop crimes before they happened led to calamitous results, including poor Bruno being severely injured.  It was the last straw and Ms. Marvel quit Captain Marvel’s junior preventative justice squad.  As she did, she tossed away the signal device that could be used to call the Captain in case of emergency.

Mike had secretly watched this all go down and she went and retrieved the signal device as a memento for safe keeping.  Having collected it from her home, she and the gang now stand on a rooftop and use it to call for Captain Marvel.

The good captain arrives with her usual panache for dramatic entrances; and Leon and Herring do not miss the opportunity for a very cool splash panel.

At first Captain Marvel seems irked.  Why is it that these cosplay kids have called her?  They better not be wasting her time…  And yet the reason for her being beckoned becomes quite evident as they look out on the Jersey City skyline in time see a series of green mushroom clouds detonating all over.  Clearly the Inventor has triggered his engage and it looks to be disastrous.

Whether or not Captain Marvel and the Kamala Korps will be up to this new challenge remains to be seen and will have to wait until the next installment as it is here that the issue ends with the promise of conclusion next month.

Another fun ride with lots of great moments…  although at this point I’m definitely starting to miss the real Kamala.  The issue starts off with a quick prologue showing Kamala’s lunchtime buddy, Neftali, and his ongoing search to find his missing pal.  I can definitely relate to young Neftali; I’m missing kamala as well and hoping she comes back soon.

In the meantime, it’s been wonderful getting to see the extended cast further cultivated in terms of character development; especially Zoe who is rapidly becoming a favorite.  Wilson really excels at offering Zoe up some very funny, self-depreciating one-lingers.

During the exchange between Zoe and The Inventor, their banter ventures into the territory of animosities between the baby boomer generation and the so-called ‘millennials.’  The Inventor is perplexed that Zoe should try and stick up for the older generation considering all the social frictions existent between the two groups.  Zoe admits that she does have angry feelings toward her elders, blaming them for ruining the economy and environment and their general slowness in accepting young people.  Still, she’s unwilling to cast so wide a net of contempt as to just write off an entire generation… especially considering all the sacrifices they made.

It’s all a bit ham-fisted and the whole millennial versus baby boom subtext might have been better left implied instead of overtly expressed.  Although in a story that involves mechanized frogs and knife-wielding pineapples perhaps subtly isn’t really called for.

What is handled with a smoother hand is a nice exchange between Zoe and Roger about the importance of symbols and aspiring to be super.  Zoe explains that knowing Ms. Marvel was out there just made everything feel better; it created a sense of security and helped to make a hectic world seem all the more tolerable.  With her missing, Zoe and her friends felt it their responsibility to fill her shoes and maintain that sense of security for other people.  Having been captured by The inventor, Zoe has come to realize there is much more to being a super hero than dressing the part…  She feels she is missing the magic, the key ingredient that makes a super hero super.  Yet Roger disagrees.  He sees Zoe standing up to The Inventor, sticking to her principles despite the direness of the situation and he is very impressed with her.  She may not have super powers, but she’s brave and strong and doesn’t back down.  As far as Roger is concerned Zoe is just as magical and heroic as any super powered caped crusader out there.   It’s a nice moment.

The whole issue is just a joy to read, the illustration and coloring is top notch and I’m very much looking forward to seeing how the whole arc wraps up.  While other books are relying on gimmicks and twists to generate buzz, Ms. Marvel has continued to truck on providing top quality comic book fun.  Definitely recommended.  Four out of Five Lockjaws!