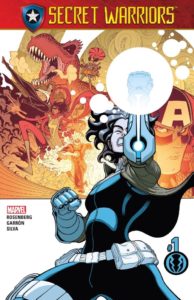 Spinning out of the Secret Empire cross over event, Mathew Rosenberg, Javier Garrón and Israel Silva bring us the debut issue of the all new Secret Warriors.

A sentient version of the reality-bending Cosmic Cube has altered the fabric of reality, changing history so that Captain America has been transformed and has secretly been an agent of Hydra, quietly biding his time and putting into place a grand scheme to seat Hydra as the rulers of the United States and soon the world.  The plot has been initiated and the world’s heroes were caught by surprise as the greatest among them has been revealed as a traitor and the most dire of threats.
Rogers and his Hydra forces have sprung their trap, encasing much of Manhattan in an impenetrable orb of Darkforce energy while using Alpha Flight’s earthly shield to strand many of the world’s more powerful heroes in outer space.  Shield has been compromised, the majority of its agents having been brainwashed into following Hydra’s command; and there are plenty of angry young men and women willing to join Hydra’s new world order.  Things are pretty bad.

The issues narrative jumps back and forth between periods of time before and after Hydra’s sinister take-over.  The central focus is on Daisy ‘Quake’ Johnson.  Along with being an Inhuman who can control seismic waves, Daisy is additionally a high ranking Shield agent who led ‘Moth Squadron,’ a task force that had monitored Inhuman affairs.  Daisy had become suspicious of Hydra’s plots and Steve Rogers set her team on a mission that was covertly an ambush where her team was attacked by the villainous Wrecking Crew.

Daisy was ultimately able to defeat the Wrecking Crew, but her entire team was killed in action (including, it would appear, YoYo Rodriguez, the former Secret Warrior known as Slingshot – although I certainly hope she isn’t truly dead because it would be a terrible loss).

Aware of Rogers’ treachery, Daisy arranges a secret rendezvous with her trusted alley, Phil Coulson.  Coulson cannot believe that Rogers has gone rogue but agrees to investigate the matter and the two arrange to meet once more at a coffee shop in The Bronx.

Then the take over occurs and Hydra assumes control of the majority of the Eastern Seaborne.  The Inhumans are viewed as impure in accordance to Hydra’s racist world order and the city of New Attilan is sacked, its citizens arrested and placed in a heavily fortified internment camp.
Daisy awaits Coulson in the coffee shop but he never arrives, instead she is accosted by a group of her former fellow Shield agents who attempt to take her in for ‘reprogramming.’

Daisy is able to defeat these agents and she formulates a plan for mounting a resistance to Hydra’s rule.  A key facet to this plan is locating a freeing a specific Inhuman.  She calls upon the assistance of Ms. Marvel and Moon Girl to intercept a convoy she believes is transporting the individual Daisy is searching for.  It remains unclear how Moon Girl and Devil Dinosaur managed to escape the DarkForce dome encasing Manhattan, but she agrees to join Ms. Marvel in taking out the convoy.  Ms. Marvel and Moon Girl are initially suspicious of Daisy; the other Shield agents have somehow turned evil, so what should make her different?  Fortunately, Daisy is able to pass Devil Dinosaur’s smell test… her scent seems clean to him and this is enough to assure Moon Girl and Ms. Marvel that Daisy is on the up and up.  There’s a good deal of tension and salty banter between the three.

It turns out that the convoy is not transporting the individual Daisy is looking for but is rather holding the young Inhuman, Inferno, as well as a pair of additional unnamed Inhumans.  Discouraged, Daisy dismisses her allies, opting to continue her mission on her own.  Yet Ms. Marvel, Moon Girl and now Inferno are not so easily deterred.  They have learned that The Inhumans are being kept at an internment camp and will not rest until their peoples are freed.

Daisy and Ms. Marvel continue not to see eye to eye.  Daisy feels that stealth and digression is advised whereas Ms. Marvel simply cannot stand by leaving their fellow Inhumans locked up in what is essentially a concentration camp.

Before the two can reach a consensus, Moon Girl takes matters into her own hands and approaches the front gate, distracting the guards long enough for Devil Dinosaur and the others to sneak up and begin to wreak havoc.  A massive battle erupts as many of the Inhumans are freed and fight against their Hydra captors.

Among the fracas, Daisy seeks out the specific Inhuman she has been searching out: Karnak.  Daisy needs Karnak, his ability to perceive the flaw in all things may prove essential in devising a stratagem for deafening Hydra.  Surprisingly, Karnak is not especially interested in being rescued.  He has once more retreated into a utterly pessimistic and nihilistic mindset.  With he loss of the Terrigen Cloud his race has been effectively doomed to extinction and he doesn’t feel especially concerned that the human nation of America is currently tearing itself apart.

Karnak’s mood and attitude shifts quite quickly when he sees that Moon Girl has accompanied Daisy in his rescue.  He is quite pleased to see Lunella and quite suddenly changes his mind and decides that he will join Daisy’s crusade after all.  This exchange entails what is sure to be my favorite panel of the day…

Karnak suggests, however, that who they truly need is not incarcerated in this camp, that he has instead been taken by The X-Men.  Whom Karnak is referring to and what The X-Men are up to are both matters left unrevealed as the issue ends on this cliffhanger.

A fun albeit slightly disjointed first issue.  The narrative is a bit hampered by being so tied into the goings-on in the pages of the main Secret Empire book.  I’m actually an issue behind on Secret Empire and, while I was still able to follow the plot, the enormity of the stakes did not quite sink in for me.  And this made it especially jarring to see characters like Ms. Marvel and Inferno fight with a level of ferocity that I’m not used to.  I realize that these villains are nazis and all nazis should die terrible deaths, but are some of the bad guys just mind controlled?  Whatever the case, Inferno straight up incinerates a number of goons and nazi or not it is quite disconcerting to see your heroes killing people.

Mathew Rosenberg’s decision to utilize a time-skipping narrative, jumping to points before and after the Hydra takeover is a risky choice.  It works for the most part, but also adds to the general feeling of the book being a mere side-story to the main tale taking place in Secret Empire.  My guess is that the main Secret Empire book has these matters covered and it may have been a smarter choice to focus on character development rather than the sinister mechanisms of Hydra’s plot.  As it stands, Daisy is offered development and motivation whereas Ms. Marvel, Moon Girl and Inferno feel more like supporting players.

Fortunately, Rosenberg excels at writing Daisy.  Nick Fury’s training has led her to suspect everyone and trust no one.  Just as she was coming to be able to rely on others, Steve Rogers turned on her and it cost her the lives of her team.  It has left her somewhat traumatized.  It is clear that she is fearful over the prospect of leading the younger Inhumans into battle… frightened over the idea of these young heroes also dying under her command.  Yet she attempts to suppress this fear through a rather transparent facade of jaded sass and quippy insults.

It’s clear from the get-go that Daisy and Ms. Marvel are not going to get along.  Even in these dire times, Kamala is unwilling to give up on her ideals of what it means to be a hero.  And this is sure to be at odds with the moral gray areas Daisy will need to resort to in order to succeed in their mission.  Daisy knows that this is war; and there’s no way to win a war without getting your hands dirty.  It’s a grim truth that Kamala is sure to have a great deal of difficulty with.

Karnak only shows up for the last few pages of the issue, but makes an interesting impression.  In the Karnak miniseries, Warren Ellis established the character as a supreme nihilist, a pessimistic curmudgeon who was wonderfully fun to read about despite his sour demeanor.  And yet this nihilism is cast in a very different light against the backdrop of a world taken over by fascists.  Everything that is sort of cool or appealing about ‘not caring’ is recast as complicit when such terrible things are occurring.  Yet Karnak has no interest in the world of humans and sees his own race as already doomed to extinction.

It is only the appearance of Lunella that changes Karnak’s mind.  It is not yet made entirely clear what it is about Lunella that causes this change in attitude.   My current guess is that Karnak sees in her a sense of dueling intellect and innocence that offers him the one things he feels is beyond him: hope.  Whatever the case, I’ll be very interested to see how Karnak and Lunella’s relationship evolves in future issues.

Javier Garrón’s art is on point.  He is asked to fill in a great deal of action is a relatively small number of pages and utilizes a panel economy that is highly busy while not disorganized (which I cannot imagine is easy to do).  The action is fluid and dynamic and he really excels at illustrating chaotic scenes.  The quieter scenes are a bit more static and I’m still warming up to Garrón’s particular approach to relaying facial expressions of emotion.

Colorist, Israel Silva, also does excellent work, especially in terms of using different pallets to distinguish those scenes set in the past versus those set in the present.  My one gripe is the curious choices of how Daisy and Kamala’s hair are colored.  For some reason, Daisy’s hair is now brown instead of black and Kamala’s black instead of brown.  I’m not sure why this decision was made and, while it’s a minor nitpick, I nevertheless hope it gets rectified in subsequent issues.

All in all this first issue feels more like a preview of Secret Warriors as opposed to its official debut.  It’s a good read, but being so tethered to the Secret Empire event is certainly a handicap.  A part of me feel like the real first issue of Secret Warriors will come when Secret Empire is over and Rosenberg and company can be free to tell their own story in a much more independent and unencumbered fashion.  Nonetheless, it’s still lots of fun and recommended.

Three out of Five Lockjaws