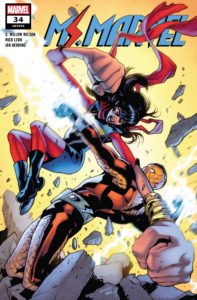 Things have really been spinning out of control for Kamala and Bruno… quite literally of late.  And Ms. Marvel gets an assist from a very unexpected guest star.  All from the creative team of G. Willow Wilson, Nico Leon and Ian Herring.

Kamala and Bruno had decided the best way to sidestep their mixed up feelings for one another was to table the whole matter and instead explore the nature and limitations of Kamala’s Inhuman powers.  Yet doing so seems to have sent things out of whack and Kamala has lost the ability to fully control these powers.  And of course it has all happened at the worst of times to boot as Ms. Marvel found herself facing off against the sinister Shocker.

It still remains a mystery as to what has caused Kamala to so lose control of her powers.  Has it been the result of the electronic monitor Bruno had attached?  Did she experience a panic attack?   Or is it some other, shocking variable yet to reveal itself?

Whatever the case, Kamala has tried to bear through it so to put an end to The Shocker’s schemes.  She pursued the villain back to his bizarre, cobbled-together hideout and managed to best him.  But then her powers fizzled out again and this strange spinning vortex appeared out of nowhere.   At that same moment a similar vortex manifested in the middle of Bruno’s lab.

Gazing at these images, Bruno sees one where he and Kamala get married… an exciting prospect for him.  Although in this future his past injuries have resulted in his having to use a wheelchair, which gives him great pause.  Yet through it all Bruno’s keen wit comes upon an epiphany.

The great mystery of Kamala’s powers is how she has been able to change her shape, shrink and enlarge without altering her density.  From where was all this extra mass coming from and going to?  Bruno posits that what Kamala’s power are actually doing is borrowing and depositing the extra mass from her own future selves.  Wild!

And this leads Bruno to consider another possibility.  What if all that has gone wrong with Kamala has nothing to do with the experiments they had conducted?  What if this malfunction has actually been the result of something to do with The Shocker?!?

Meanwhile, back in The Shocker’s ridiculous lair, Ms. Marvel is mystified by the mysterious vortex.  The Shocker explains that this vortex is the product of his own experimental tinkering.  He created it pretty much by accident and kept it around as a cool means to get rid of his enemies.

Once more, Ms. Marvel’s powers are all out of whack.  Her arms elongate and just lie at her sides like piles of ribbon.  The Shocker takes advantage of the situation and pushes Ms. Marvel into the Vortex and she is sent spinning away into the neither realm between realities.

She finds herself trapped once again in yet another shapeless void (seems to be something that happens quite often for her).  There doesn’t appear to be any escape.  Fortunately, someone has noticed Ms. Marvel’s presence and comes to her aide.

It’s Singularity, the other-worldly hero who appeared in the pages of A-Force.  Ms. Marvel doesn’t know Singularity in this reality, but they were teammates in the alternate reality realm of Battleworld… a matter that this version of Ms. Marvel has no recollection of, but Singularity does.  It’s all rather confusing for Kamala.  Thankfully Singularity knows that Ms. Marvel is one of the good guys and she helps her escape back to earth.

It’s a rough ride as Ms. Marvel and Singularity travel through the multiverse and finally make it back to Jersey City.  Ms. Marvel is deposited into the ally behind the Circle Q…

Elsewhere, Bruno has dashed out in search of Kamala.  If The Shocker is indeed the source of her loss of control over her powers, then he needs to warn her.  All the stress and exertion has overtaxed the vibranium harness that allows him to walk and Bruno needs to take a moment to recuperate.

All this time he has been conversing with a virtual assistant module from the Xavier School that projects a small holographic image of Professor X.  This virtual assistant is based on the memory, knowledge and experiences of Professor X, someone who himself had to cope with being remanded to a wheelchair.  It’s a prospect that Bruno has to consider and he asks the holograph how he learned to deal with it all.

The holograph replies that he had to adjust on a new outlook on his life.  Full mobility had been something he took for granted and its loss forced him to reimagine what it actually means to live well.  He reprioritize, making incremental progress toward attaining this new concept of a life lived well… until one day coming to realize that he had achieved the goal and was actually living that life.

It’s not entirely clear how all this resonates with Bruno.  Whether he feels the professor’s words are pat and uninspiring or if this whole notion of reimagining what a life-lived-well is actually makes a lot of sense to him.  Whatever the case, Bruno has rested up and is now ready to get back to trying to find his friend.

Somehow The Shocker has managed to find Ms. Marvel at the Circle Q.  He’s disappointed to find her there… he had hoped his device had more fully dealt with her.  No matter, The Shocker is confident he can take care of Ms. Marvel the old fashioned way… with the use of his pulse firing gauntlets.
He readies up to take her on and Ms. Marvel braces herself for the battle.  And just then, Bruno happens upon them.  The Shocker fires a pulse wave and Bruno desperately jumps in front of it to protect Kamala!

Mayhem!  There’s a whole lot of weirdness packed into the issue; lots of wild ideas, lots of questions answered and new questions posed.  Let’s try to unpack it one piece at a time.

Bruno concludes that Kamala’s powers work by way of borrowing and depositing extra mass from her own multi-pronged time-stream.   Very interesting…   Of course I’m not going to pretend I actually understand the theoretical physics behind this idea.  I guess the idea is that mass is a constant whereas time is in flux… and that this mass can be moved in a hydraulic fashion taken from point A in the time-stream and moved to point B.  No idea whether this is how things might work in the real world, but it is certainly the kind of outré notion very much at-home in the Marvel Universe.

Bruno additionally comes to the conclusion that Kamala’s loss of the ability to control her powers has something to do with The Shocker’s presence.  Which indeed appears to be the case…  Whatever kooky experiment The Shocker had conducted so to create this time vortex does indeed seem to have affected Kamala’s ability to manipulate mass…

I suppose this is sort of similar to putting a magnet near a compass…  The electrical field generated by the magnet screws with the compass’ ability to point to True-North.  Likewise, the field created by the time vortex has also screwed with Ms. Marvel’s ability to borrow and deposit extra mass from her time-stream.

And just as a compass’ needle might spin about wildly when placed near a magnet, so too does Ms. Marvel’s powers act all out of whack… causing her to shrink and enlarge and stretch all out of control.

So when did The Shocker become such a twisted genius?  He’s been inventive in the past, but all this is on a whole new level.  The Shocker has been a lot of fun in this arc, although I’m wondering why a different villain or a completely new character wasn’t used for the role.  For me, it would have made more sense if it were say The Wizard or The Mad Thinker who was behind all this diabolical madness.  The Shocker has usually been more of a goon than an ingenious inventor.  Still, I guess The Shocker has ambitions to rise above his current station and all this mayhem is a result of it.  I mean, bad guys should get good character development too…

Speaking of character development, I’m quite glad to see that Bruno’s past injuries haven’t been put on the back burner.  The harness and Quezi designed for him allows for greater mobility, but it remains a temporary fix.  Bruno is still physically disabled and must cope with the looming prospect of this hardship worsening in his future.

Physical disability is such a difficult matter to understand.  So many people must contend with such things, yet for those who don’t, fully empathizing with the matter is all but impossible.  It’s true that little things, like walking to the bathroom, is a matter that many just take for granted.  And the idea of loosing such ability is absolutely terrifying.  It’s a specter that Bruno must face and it will be interesting to see how he handles it all.

The way that the holographic image of Professor X presents the matter of living while in a wheelchair was intriguing.  I like this notion of reimagining what constitutes a life well lived and making gradual progress toward attaining that goal.  It’s a neat way to look at life and growth for anyone.  Still, I can commiserate with Bruno that the whole matter might feel canned in the face of the daunting prospect of becoming disabled.

There are so few characters in comic books who are representational of people living with disabilities.  The real Professor X is dead and there remains a significant dearth of characters who live with full or partial paralysis.  I certainly don’t wish the matter onto Bruno, yet if he does ultimately end up having to use a wheelchair I will at least be glad to see the matter shown and represented in the Marvel Universe.

Finally, there is the matter of Ms, Marvel and Singularity quick jaunt to a mysterious place where Ms. Marvel briefly meets a young man who seems to recognize her.  Who is this guy?  What is this place?  Singularity whisks her away, stating that her being there will mess with her personal time-stream.
We’ve known for a while that there is something special about Kamala, something particular with her lineage and future…  We’ve seen hints of it peppered throughout her various adventures.  This guy and this place seems to be yet another clue, but it all remains a mystery yet to be fully explored in the stories.

Once again, Wilson’s script, Leon’s art and Herring’s coloring all works wonderfully in conjunction… weaving together a wild tale of nutty ideas, cool action and relatable pathos.  Another great issue and I’m very much looking forward to seeing how this whole tale wraps up in the next installment.  Definitely recommended.  Four out of five Lockjaws!