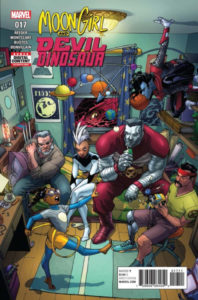 It’s the penultimate installment of The World’s Smartest storyline  and a tale that sees Moon G and Devil D teaming-up with none other than the Extraordinary X-Men!  All from the creative team of Amy Reeder, Brendan Montclare, Natacha Bustos and Tamra Bonvillain.

Okay, so at some point between the various occurrences that have taken place during The Wold’s Smartest story arc, The Inhumans Versus X-Men event must have gone down.  Long story short, The Mutant race were on the edge of extinction due to the Terrigen Cloud being poisonous to them.  Lunella playing a pivotal role in helping Forge create a machine that destroyed the cloud, saving all Mutant life on earth.
Lunella and Forge have been pals for a while (they first met way back in Extraordinary X-Men Annual #1) and at some point Lunella must have reached out to him asking for assistance with her current situation with Dr. Doom.

Lunella, Devil D and The X-Men all travel upstate to an abandoned mall where Forge has hidden away one of his many workshops.  Within this workshop, Forge is able to find an old Cerebro unit he had built some time back.   For those of you unfamiliar with X-Men lore, a Cerebro unit is a machine specially devised to locate Mutants (individuals possessing the X-gene).

Lunella plans to utilize the Cerebro device to locate Doom, modifying it by combining it with the circuitry of the Omniwave Projector.

The Omniwave Projector is an ancient Kree device that can open portals to different dimensions and times.  Combining it with Cerebro is sure to bring about an unexpected result, but before Forge can stop her, Lunella initiates the amalgam device and suddenly the lot of them are all sent back to the mid-1980’s!

It’s an interesting turn of events.  Quite suddenly the mall is no longer abandoned but is instead teaming with shoppers all dressed in gaudy 1980’s fashions.  The X-Men have changed as well, reverting to their younger-looking selves… with Old Man Logan transformed into his younger self and his classic brown-and-orange Wolverine togs (his best look in my opinion) and Storm transformed into her punk rock outfit (her best look in my opinion).  Fortunately, Lunella isn’t transformed into an unfertilized embryonic egg…

Despite being in their younger bodies, The X-Men retain their older consciousnesses.  Before they can figure out exactly what has caused all this to occur, they are attacked by Dr. Doom… and not just one Dr. Doom, but a legion of Dooms.

A battle ensues.  The X-Men and Devil Dinosaur fight valiantly, but even their combined might is hopelessly outmatched by the army of Dooms.  Trying to make sense of it all, Lunella makes an adjustment to the Cerebro/Omniwave device and it cause time to freeze in place.  Another adjustment and they are all sent back to the present with the singular Doom as their captive.

Logan’s enhanced senses tells him exact who (or rather what) this Doom is and a quick slash from his claws beheads Doom, revealing it to be a robot.  A Doombot to be precise, one of the many automaton duplicates that the real Doom has employed countless times in the past.  Logan speculates that the Doombot must have gone rogue once the real Victor Von Doom decided to try his hand at being a hero (as detailed in the current Infamous Iron Man series).

Whatever the case, the disembodied robot head informs Lunella that its threat toward her is far from over.   Its android intellect is still out there, it still possesses an army of fellow Doombots at its disposal; and it will not quit until Lunella has been vanquished hence proving that Doom is the smartest of the smart.

Moon Girl and Devil D part company with the X-Men, the X-Men promising to be there whenever she may need their aide in the future.  Lunella takes the Doombot head back to her secret lab where it is wonderfully posed atop junked stop sign.  Though disembodied, the robotic head continues to taunt Lunella, reiterating its claim that Doom is sure to prove victorious.

Listening to the despotic bot prattle on, Lunella comes to a conclusion quite befitting of her lofty intelligence: in order to deal with this threat, she is going to need to rely on the help of her friends.  Here the issue ends, setting up the grand finale in next month’s installment.

This was another fun read.  It was a bit softer on the general thematic coursing thus far through the ‘World’s Smartest’ arc, but a neat romp nonetheless.  With all of the doom and gloom going down int he X-Men books of late, it was really neat to see the Extraordinary team guest star in this much more light and fun tale.  Bustos and Bonvillain’s art is terrific and it’s great getting to seem them depict the X-Men.  Would I prefer to see Lunella and Devil D finally interact with the Inhuman Royal Family?  Yes.  But the X-Men are a fine consolation prize.
There a lot of fun details in Bustos’ pencil work.  I love that Forge’s secret lab is located in a deficit Sam Goody record store; and that Colossus takes advantage of it to add some new albums to his collection (Although The New Kids on The Block’s ‘Hanging Tough’ is an odd choice :3)

The most important part of the issue, however, is that Lunella has discovered what it is she truly needs to deal with Doom.

As a child psychologist, one of the things I’ve found to quite often be the case with youngsters is the ability to be independent is actually born out of a healthy dependency… that the flower of autonomy grows from the soil of mutuality.  Our abilities to do things on our own and be self reliant is facilitated by the sense of containment that comes from knowing that we don’t always have to go it alone.  Kids who feel that their parents, or guardians, or friends will be there for them are emboldened with the strength to do things on their own.  And this is how the capacity for real self-reliance is imbued.

This appears to be the key lesson that Lunella is learning throughout the story line of The World’s Smartest.  Lunella has always felt that she has been smarter than everyone around her, and now she has been given proof that this is indeed the case.  Being so smart, the smartest of the smart, Lunella believe that she can only rely on herself and she has resisted the urge to be dependent on others.  It seems that Lunella pushes away her need to rely on others because she sees it as a sign of weakness; she doesn’t yet possess the wisdom needed to realize that such dependency can actually be a tremendous source of strength.

It’s fitting that Dr. Doom (or at least a version of Dr. Doom) should be Moon Girl’s adversary in this adventure.  Doom is just as smart if not smarter than his nemesis, Reed Richards.  Yet he always lost in his battles with Richards because while Doom saw himself as peerless and needing no one’s aide, Richards was always able to rely on the rest of his family among The Fantastic Four to have his back.  Richards’ dependency on his family (something Doom looked at with contempt) was the x-factor that always enabled Richards to defeat Doom time and time again.

If Lunella is to defeat Doom then she is going to have to get over her own sense of peerlessness and contempt toward depending on others.  She is going to have to call on her friends, reach out to the new allies she has made over the course of the story and utilize the containment of support they offer to give her the edge over Doom and emerge triumphant.
I’m very much looking forward to seeing how this pans out int he concluding chapter.
Highly recommended; Three and a half out of four Lockjaws.