You are here: Home / Reviews / Death of The Inhumans #3 Review (spoilers) 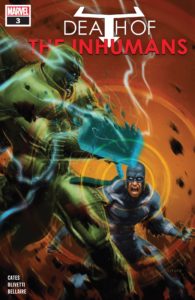 The Kree have declared war on The Inhumans, launching a bloody attack that has decimated the lunar city of New Arctillan.  Seeking revenge, Black Bolt traveled to Hala to retaliate and there unleashed his incredibly destructive voice, obliterating his enemies.  And yet he underestimated the Kree war-chief, the mysterious and powerful being known as Vox… all but paying for it with his life.  The battle resulted in Black Bolt’s throat being severed, a wound that may very well negate his greatest power: his voice.
Now with Black Bolt defeated and held in the clutches of The Kree, Medusa and what remains of the Royal Family must devise a new strategy to rescue their king and bring forth vengeance for the countless Inhumans who have perished under The Kree’s bloody campaign.
It’s the middle installment of a five-part series, from the creative team of writer Donny Cates, illustrator Ariel Olivetti and color artist, Jordie Bellaire.

The tale starts off with Karnak recuperating from his journey back from Hala.  He had refused to make the journey in a straight line, instead circling back to destroy whatever Kree ships that had been pressuring him.  He has informed Medusa and the others what occurred on Hala, how Black Bolt had been felled, possibly killed by Vox.

Still, there is the chance that Black Bolt may still be alive and his family is going to do all that they can to rescue him.  Crystal lobbies contacting the heroes of Earth; surely there are dozens of allies among the Avengers, Alpha Flight and the newer Inhumans who would come to their aide.  Yet Medusa discards the idea out of hand.  She doesn’t want assistance from these moral and righteous heroes of earth; she doesn’t want the Kree captured or brought to justice… she wants them dead.  No, Medusa has another ally in mind… one who would be much more willing to spill blood and extract the degree of retribution that she is seeking.

The narrative switches back to Hala where Black Bolt is subjected to a gruesome surgery.  Vox’s cut appears to have severed Black Bolt’s larynx and the surgeons sew shut the wound.  Vox and the still-to-be-named General leading the Kree forces watch the proceedings.  Vox declares the threat posed by Black Bolt to be eliminated.  The much feared prophecy of a ‘midnight king’ who would bring about the fall of the Kree Empire has been stamped out.

This surgery is all being performed without any form of pain killer and even now the fallen king cannot scream out from the agony.  His voice is gone and with it any threat of bringing that dreadful prophecy to fruition.

Later, Black Bolt is remanded to a cell, guarded by a pair of Kree soldiers who mock his apparent powerlessness.  He sits stoically for some time before attempting to speak, garbling a mumble over his ruined vocal cords.  At first the soldiers laugh at their prisoner’s pathetic attempt to speak.  Yet Black Bolt continues to try.  His voice has been reduced to little more than a horse whisper, but it is not entirely without power.  He again recites the names of his fellow Inhumans killed in The Kree’s attack

With each name recited, one of the soldiers begins to feel ill.  Soon blood is flowing from his nose as though his brain is being slowly crushed from within.  The other soldier tries to stop him, slamming the butt of his rifle into Black Bolt’s head.  Yet he continues on.  Black Bolt recites the names of Naja and Sterlion, Flagman and Glass Girl.  The first soldier fall over dead and the second is feeling the effects as well.  Black Bolt speaks the name, New Arctillan, and the second soldier appears to suffer a full cerebral hematoma.

Now free, Black Bolt wanders the hall of the darkened prison.  Soon he comes across some sort of cruel operating theater.  There he finds his one time adversary and one time ally, Ronan The Accuser.  Tubes and other bizarre devices are fastened into Ronan’s body, his arm and side has been replaced with mechanical prosthetics… something truly terrible has been done to him.

Ronan is awake and greets Black Bolt.  He explains that this new fanatical division of The Kree had come to the ruins of Hala and defeated him.  The army’s children and families wait for them, wait until all opposition can be crushed and a new, unbeatable empire can be established

Ronan is in the process of being changed into a weapon for the purposes of this conquest.  This is the mandate of this new Kree Empire – kill the weak, enslave the strong, break the unwilling and eliminate all opposition.

Ronan understands what is being done to him, how he is being somehow transformed.  Soon his mind will no longer be his own and his body and strength will be used as yet another weapon.  He pleads with Black Bolt to end it, to forgive him for his past transgressions and speak this forgiveness allowed.  In short he asks that Black Bolt kill him before these villains can transform him into some form of zombie soldier.  Black Bolt grants the request and says, ‘you are forgiven.’  Though it is not directly shown, it seems as though Black Bolt’s saying this puts Ronan out of his misery, killing him so that he cannot be used as a weapon.

Elsewhere, Medusa and the Royals travel through space toward an unknown location.  Medusa has someone very specific in mind, knowing that this being will surely fight by their side once he learns that Lockjaw has been killed.  Medusa feels a certain degree of shame over the prospect of leveraging the deaths of their loved ones so to elicit aide.  Karnak, however, finds a twisted satisfaction in it.

All life is entropy in Karnak’s mind… what better reason is there to bring about death and destruction other than seeking vengeance for a fallen friend?

They arrive at their destination where they find Beta Ray Bill, the Korbinite warrior who wields the Asgardian hammer,  Stormbreaker.  Bill is disinterested in The Inhumans’ plight, he is done using his power to wreak havoc across the galaxy.  Yet he changes his tune once he hears that his friend Lockjaw has been among the casualties.

Apparently Lockjaw and Beta Ray Bill had shared many adventures together and Bill is stopped in his tracks at learning that his beloved pal has been killed.  Medusa’s gambit has clearly paid off.  She has found a powerful ally who will fight for them and fight without mercy.

And it is here that the issue ends with he promise of continuation in the next installment.

An interesting turn of events.  There is not a whole lot to say about the issue in that it is very much a middle stanza dividing the two main chapters of the series.  The first chapter was all about The Kree bringing down the Inhumans, and it looks as though the second chapter will be about The Inhumans getting their revenge.  And this middle section is sort of a brief respite of calm between the two storms.  No big secrets or plot wrinkles are revealed.  And while it is neat to see just how resilient Black Bolt can be, and exciting to discover that Beta Ray Bill will be recruited into the fight… I’m starting to get a little restless in wanting to see the mysteries revealed.  These mysteries being who or what Vox is and where he came from; whether or not there is some greater force behind this new fanatical faction of The Kree; and if there may be other Inhumans whom The Kree are looking to transform into living weapons the way they had attempted with Ronan.

Although it appears as though Black Bolt had euthanizes Ronan, my guess is that this will not be the case.  Rather I think Black Bolt’s actions have freed Ronan from whatever butchery the Kree had subjected him to.  I expect to see Ronan fighting at Black Bolt’s side in the next issue.

It is interesting that, with his vocal cords so damaged, Black Bolt’s powers work quite similarly to that of his son, Ahura.  It’s also a bit odd that The Kree should be so ignorant of the full nature of Black Bolt’s powers.  His voice is his greatest weapon for certain, yet he also possesses flight, super strength and the capacity for molecular destabilization.  So many stories just seem to forget about these secondary powers.  Yet, perhaps Black Bolt is actually using his molecular manipulative abilities to slowly repair his ruined larynx.  I guess we’ll see…

Black Bolt continues to be the main character of the series.  Karnak gets some fun lines and Cates continues to excels at scripting Karnak’s dialogue.  Medusa get to show off her prowess as a tactician, but that is about it.  Crystal and Gorgon are just sort of there and continue to be grossly underutilized in the plot.  I’m hoping that Crystal will be allowed to show off just how powerful she is before the series comes to its conclusion.

Introducing Beta Ray Bill to the story is both surprising and welcome.  There are so many great cosmic heroes out there in the broader Marvel Universe and I am all for bringing them back into the foreground.   Bill’s introduction in the pages of Walter Simonsson’s The Mighty Thor #337 remains one of the greatest tales of Marvel’s cosmic pantheon.

Furthermore, both Bill and Ronan have been shown as among the extended cast for the upcoming Guardians of the Galaxy relaunch by Cates and artist Geoff Shaw… perhaps the conclusion of Death of The Inhumans may in some way ducktail into whatever Cates and company have in mind for the 2019 Guardians relaunch.

Compared to the chaos and carnage of the first two issues of the series, this third issue was much more calm and subdued.  Yet I’m feeling hopeful that it will connote a changing of the tide and that we will get to see the Inhumans gain the upper hand in the final two installments.

The illustration is pretty good.  I’m a fan of Ariel Olivetti’s art, although I kind of prefer his digitally rendered work over his pencil work. The figures and facial expressions are a bit static.  I also feel that Vox should be framed in a more dynamic and intimidating fashion.  He’s supposed to be this ultra-tough customer, but sometimes he looks a bit diminutive, slinking behind the Kree General.

Jordie Bellaire coloring and pallet continues to match the tenor of the story just perfectly.  The grim nature of what has happened, what Black Bolt has been forced to endure, is toned in grays and muted earth-tones and it works terrifically, escpailly when juxtaposed to the bright, natural surroundings of the world where Medusa seeks out Beta Ray Bill.

As has been the case with the entirety of this series, it is difficult for me to try and look at the whole matter from a more objective vantage.  I imagine that for those who are not as heavily invested in The Inhumans as I am all this may come across as an engrossing and thrilling tale with a poetic narration and high stakes feel.  Whereas I’m turning each page desperately hoping for a scene showing Maximus and Lockjaw revealed as alive.

Trying my best to disabuse myself of this bias, the story is pretty cool and the kind of intense, cosmic wildness that I’m normally all about.  I’m going to be optimistic and hope that we have seen The Inhumans pushed down as low as they will go and that what will proceed will be all about redemption and righteous vengeance.

Recommended.  Three and a half out of five Lockjaws