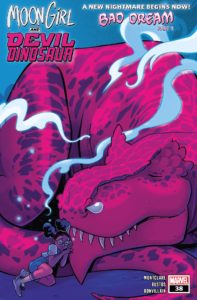 It’s the beginning of a whole new arc as Moon G and Devil D embark on an adventure that finds them in the mysterious realm of the Dream Dimension.  From the likely sleep-deprived creative team of Brandon Montclare, Natacha Bustos and Tamra Bonvillain.

Lunella Lafayette has been having the worst time sleeping of late… and she’s not the only one.  Her nights have been fitful, filled with anxiety dreams and nightmares, all leaving her waking up completely unrested.  And it would appear as though most of her classmates are additionally plagued by troubled sleep, struggling with their own bad dreams… the teachers too.  It’s almost as if all of Public School #20 has been infected by some sort of syndrome of bad sleep and troubling dreams.

After taking one two many hits in dodgeball during gym class, Lunella has had enough and she sneaks through the maze of nebulous air-duct tunnels that lead to her secret laboratory under the school.  There she finds Devil Dinosaur, snoring away.  She joins him, snuggling up for some much needed sleep.

Whatever hopes Lunella had for getting the rest she needs are quickly dashed as she finds herself once more engulfed in another vibrant dream.  Yet this one seems different, more real and elaborate.  A voice informs her that she has entered the ‘dream dimension,’ a preternatural realm outside of reality.

The voice emanates from a slight figure perched atop a giant purple mushroom.  He introduces himself as ‘Bad Dream’ the wonder warlock, the baddest dream demon of them all.

Lunella is less than impressed.  She’s gone up against likes of the Omnipotis, The Kingpin and Mr. Sinister… some kid in a halloween costume isn’t going to scare her.

Little kid or not, it does seem as though this Bad Dream fellow has been the one responsible for ruining everyone’s sleep and filling their heads with nightmares.  Bad Dream doesn’t seem to think of the matter as all that big a deal.  He feels those who live in the waking world have got it made.   Whereas it looks as though Bad Dream may be stuck in the Dream Dimension, with only his Cloud Chimera for companionship.

This Cloud Chimera is this long, translucent,  jellyfish-looking creature whom Bad Dream states protects him.  Together they’re a team… not altogether unlike Lunella and Devil D.

Rather suddenly, Bad Dream decides that it is very important that Lunella leave.  It isn’t clear whether or not the little guy has grown bored of Lunella’s company or (more likely) he feels it no longer safe for her to be there.  He demands she leave, but Lunella isn’t budging… not until Bad Dream promise to stop his funny business and let people start getting better sleep.

Bad Dream ups his demand that Lunella shove off, chasing her off atop his Cloud Chimera.  Outmatched, Lunella has no choice other than to wish herself awake.  Suddenly, she finds herself back in her lab… once again thoroughly unrested.

But she and Devil Dinosaur are not alone!  Somehow the Cloud Chimera has transcended through the dream dimension into the real world.  At first Lunella imagines she must still be dreaming, but this is no dream.  She’s in real danger.  The Chimera swoops and circles about the lab, chasing Lunella until Devil D finally catches it with a devastating chomp.  And with this the Chimera dissipates into a fog, returning to the dream dimension.

It all leaves Lunella quite aware that something serious is afoot… and all of this is not going to go away by merely hiding under the covers.  Moon Gilr and Devil Dinosaur are going to have to do something about this… but how?  Dreams and alternate dimensions, creatures made of clouds… this is not the realm of science; this is something more.  This is magic.  And Lunella hates magic!  Fortunately she knows just the right guy ideal to help her out.  And the preview art for the next issue shows exactly who that is.  So gear up for another Moon Girl and Doctor Strange team-up adventure!  Nice!!!

A great first issue of the arc, one that has me very exciting for the next installment.

With Lunella being as smart as she is, it is often necessary to pose her against dilemmas where she cannot easily use her intellect to devise a solution.  And the mystical realm of the dream dimension with all of the weird denizens therein fits the bill perfectly.

Lunella’s interactions with Dr. Strange back during the World’s Smartest arc were an absolute riot and I cannot wait to see more of it; the two of them are so fun and funny together, I’m quite pleased that they’re getting another adventure alongside one another.

Dreams, the psyche and the unconscious have all remained rather vexing to the world of science.  Science has discovered and figured out so much about so many things, yet the inner workings of the human brain remains highly mysterious, all but impenetrable to the conventional tools of scientific study.  Sure we know what happens in the brain when we dream, what regions are active and the functional utility of dreaming, but the meaning behind those dreams, the places they take us and the way they can make us feel remains subjective, nebulous, utterly confounding.  It’s the kind of psychological quagmire that raw intelligence is ill equipped to contend with.  A wonderful foil for out Lunella.

Bad Dream is a curious new character.  At first I figured he prove to be the son of the demonic villain and Dr. Strange foe known as Nightmare.  And this may still be the case, yet it’s looking more like he is just some normal little boy who has somehow found himself stuck in the dream dimension unable to return to the real world.  Whatever the case, I’m definitely looking forward to finding out more.  Plus I just love his costume.

Artists Natacha Bustos and Tamra Bonvillain really get to stretch their creative muscles in depicting the dream dimension and it’s all just a delight to behold.  They get a really neat slash page of Lunella’s being pulled into the dream realm and definitely make the best of it.

Following the Save Our School arc, which took place entirely in the real world confines of the Lower West Side, it’s really neat to see Bustos and Bonvillain illustrate a more fantasy-oriented setting.  Ms. Bustos offers up a wonderful landscape of floating orbs, giant mushrooms and living clouds.  And Ms. Bonvillain enlivens it all with darkened pastels, neat shades of pink and purple that makes the realm seem both dark and mysterious while also vibrant and uncanny.  Much like a dream.  Steve Ditko would surely approve.

And so do it.  Not to be missed.  A great beginning to what looks to be a very fun arc.  Four and a half out of five Lockjaws!