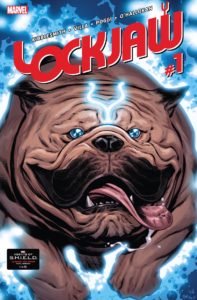 This first issue opens up on the morning of what appears to be a very special day for Lockjaw…  Situated in the Inhuman citadel of New Arctillan on the dark side of the moon, Lockjaw gazes out onto the cosmos and his preternatural sense of smell seem to detect a potential threat.  Something quite not right is afoot and Lockjaw springs to action.  Fist, however, the narrative offers us a quick glimpse of some of the other members of Lockjaw’s fellow Royals.  This includes Medusa and Black Bolt who appear to be *ahem* intimate once more… as well as the always irascible Karnak eating cereal, and Crystal reading a story to her daughter, Luna.  Then Lockjaw teleports off.

The narrative switches to earth, to the apartment of Dennis Dunphy, the one-time costumed adventurer and former Avenger known as Demolition Man (or D-Man for short).  Dennis has had a hard time of late.  Following a tumultuous career as a superhero with some highs and many lows, Dennis had retired from the life and settled down with his boyfriend, Steve.    Unfortunately, things with Steve didn’t work out and Dennis has been very much down in the dumps ever since the break up.  And his sadness gives way to anger when he sees himself as a clue on the TV gameshow, Jeopardy!, and none of the contestants can recall his name.  Then the show goes to commercial before the host can offer the correct answer and it leaves Dennis so enraged that he punches the television.

And this is made even worse when the broken glass from the TV set leaves Dennis with a pretty bad gash on his forearm.  Dennis had once possessed superhuman powers, enhanced strength and durability (qualities bestowed onto him by the villainous Power Broker), but these abilities have since gone away and the cut on his arm is bad enough to warrant a trip to the emergency room.

Exiting his apartment Dennis encounters his neighbor, a kindly albeit kind of homophobic elder woman named Mrs. Gillespie.  She is petting her pet bulldog, Bixby, and invites Dennis to a party honoring the dog’s thirtieth birthday.

Mrs. Gillespie seems like kind of a kook so Dennis doesn’t give much thought to her claims that her dog is actually thirty years old.  Besides, he’s in kind of a hurry to get to urgent care for some stitches on his forearm.

Over at the hospital, Dennis’ sister, Ruth, has arrived worried that his wound might have been the result of a suicide attempt.    Ruth means well but it’s rather demoralizing to Dennis that she had thought things so rough that he would try to kill himself.   It’s basically rock bottom for Dennis, but the good news is there is nowhere to go from here but up.

Dennis returns too his apartment building and discovers Lockjaw standing outside barking loudly.  He doesn’t recognize Lockjaw and seems to assume he is just a really big dog who might be lost.  Yet before he can investigate the matter further, Dennis is hit in the back by a hamster in a mini flying saucer.  There’s a sentence I never thought I’d write…

Suddenly Dennis and Lockjaw find themselves facing off against a veritable swarm of miniature flying saucers operated by talking hamsters.  The lead hamster recognizes Lockjaw, naming him a secondary target, instructing his fellow hamsters to apprehend the canine Inhuman.
Mrs. Gillespie and Bixby come out of the building to see what the ruckus is all about.  The hamster identifies Bixby as the primary target and its fleet engages.
With Bixbee in danger, Lockjaw goes a bit wild and takes out the swarming saucers with heightened brutality.

It isn’t long before the saucers have to retreat.  Afterwards, Lockjaw and Bixbee meet up and share a knowing sniff with one another.

Then Lockjaw is off.  Dennis still thinks he is a lost dog and runs up to see if he can check for a collar.  Doing so accidentally causes Dennis to be teleported off with Lockjaw.

The two land in the Savage Land, the secretive refuge of prehistoric life hidden deep in the antarctic.  Lockjaw has teleported to a place in the Savage Land where his one time ally and fellow Pet Avenger, Zabu the sabertooth tiger, is residing.

Zabu growls at first, but his friend Ka-Zar (Marvel’s analog to Tarzan) assures him that all is well.  Dennis is rather confused over all that has happened, but he sees Ka-Zar and is taken aback by the man’s physical beauty.

A very goofy and fun ride.   Carlos Villa’s illustration along with  Roberto Poggi’s inks and Chris O’Halloran coloring all work really nicely for the story.  Villa draws a rather funny looking Lockjaw with an especially big face with accentuated floppy joules.  It’s very much that kind of cute come funny looking often associated with pugs or bulldogs.

Villa’s penciling very much excels in the one action scene, where Lockjaw and D-Man fend off the hamsters in flying saucers.  He is especially good at showing off dynamic scenes and I’ll be looking forward to more action scenes as the series progresses.  O’Halloran’s colors really stand out, with an especially good use of electric blues that capture the cosmic nature of Lockjaw’s powers of teleportation.

There’s a lot of mystery here and it remains unknown what exactly is going on.  It would seem that Bixby is likely Lockjaw’s brother and that there may be something special about Lockjaw’s siblings that has put them in the crosshairs of these hamster-like creatures.

We know from Black Bolt #5 that Lockjaw was a dog whose mother was exposed to Inhuman experimentation on old Attilan.  The experiment appeared to imbue the her pup with special powers, but it wasn’t revealed whether or not Lockjaw’s mom had just one puppy or a whole litter.  I’m guessing that it was the latter and that Lockjaw has a number of brothers and sisters out there.  Along with an extended lifespan, these dogs may also possess other powers, powers that these saucer flying hamsters could want to exploit.  I suppose we will have to wait and see how this all pans out.

Daniel Kibbelsmith has made an interesting choice in selecting D-Man as Lockjaw’s co-adventurer in the story.  D-Man a peculiar character…  He first showed up in the pages of The Thing as part of a story that attempted to bank off growing popularity of professional wrestling.  He then teamed up with Captain America, getting a costume that was an overt knock off go outfits worn by Daredevil and Wolverine.  He was homeless for a time, mentally ill for a time, an Avenger for a time.  He was recruited into Wonder Man’s squad of Revengers and even mind-controlled into becoming The Scourge.  Then he was killed off and I don’t recall how he was eventually brought back to life.

D-Man has kind of been a cypher who various authors have used for different reasons and different plot-lines in a variety of different comics.  Kibblesmith departs from this and offers up a more fully fleshed out version of D-Man.  He depicts Dennis as a sarcastic yet lovable loser who is down on his luck.  He’s lost his powers, lost his boyfriend, things have gotten pretty bad.  He’s a guy who could really use a good old fashioned adventure alongside a giant teleporting bulldog in order to turn things around…

Dennis provides up a good point of view for the reader (particularly necessary for a main character who is a dog and cannot speak).  Dennis has no idea what exactly is going on with Lockjaw, the nature of his mission, nor the origin of these villainous space-hamsters.  Us readers are equally in-the-dark and I’m looking forward to joining Dennis in discovering the truth behind these mysteries.  Hopefully other readers will feel the same.

Of course as a big time Inhumans fan I was especially intrigued by the opening scene on New Arctillan.  Very interesting to see Medusa and Black Bolt back together and I wonder if this acts as something of a spoiler regarding what will be revealed in the 12th and final issue of Ahmed and Ward’s Black Bolt series.

In any case, it was nice to see confirmation that Crystal has reunited with her daughter, Luna, and both are doing well on Arctillan… and also nice to see that Karnak has apparently been forgiven for his past transgression in the pages of Secret Warriors and has been welcomed to reside on Arctillan with the rest of The Royals.

Lockjaw #1 is my kind of ridiculous fun and I definitely recommend it.  Four out of five Lockjaws :3