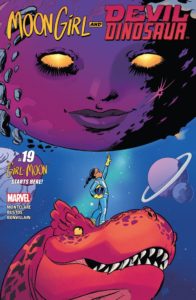 It’s the beginning of a brand new adventure as Moon G and Devil D head off to the stars in search of a mysterious girl in need of help.  Brendan Montclare goes solo on the writing chores, accompanied by Natacha Bustos on art and Tamra Bonvillain on colors.

Things have been going rather well for Lunella Lafayette as of late.  Ever since her victorious battle against the Legion of Dooms, Moon Girl and her tyrannosaurs teammate have become local celebrities in the lower east side of Manhattan.  She’s finally found the appreciation and validation she had so very much wanted.  Yet it doesn’t change the fact that she still has to sit through the tedium of her middle school science class.

Lunella and her class have been assigned a project regarding earth’s moon.  In lieu of her being named after our moon, Lunella feels compelled to take the assignment the extra mile.  In conducting her complicated radio wave experiment, she comes across a mysterious voice from the ether calling out for help.

Her name is Illa.  She’s lost her father, she’s alone and doesn’t know where she is.  Back in her lab, Lunella uses her equipment to boost the signal and triangulate Illa’s location.  It turns out that she is somewhere out in the deep cosmos… but this is not going to hamper Lunella’s efforts to save her.

She constructs ‘The Moon Mobile,’ an intergalactic craft powered by the Omniwave Projector.   Fashioned in personalized space suits (that are extra adorable) Moon G and Devil D venture off into the stars.  Lunella’s Moon Mobile falters at first but eventually kicks it into overdrive and the two rocket out of the solar system to an unknown region of space.

The two finally come across a small moon where Lunella has traced Illa’s signal.  They explore the planetoid in search of her but cannot find her.  Ultimately it dawns on Lunella that Illa isn’t on the moon, she is the moon!  And it is with this wild, cosmic realization that the issue comes to an end with the promise of continuation in the next installment.

Another fun and engaging issue and I’m happy to report that Montclare, Bustos and Bonvillain are able to maintain the book’s charm and appeal despite the departure of its co-writer/co-creator, Amy Reeder (who has headed off to focus on creator-owned works).  It’s a very neat premise that Moon Girl should meet Girl-Moon… in a universe that entails entities such as Ego The Living Planet it stands to reason that there could also be Illa The Living Moon (and I’m guessing that Ego may very likely be the father Illa has managed to lose).

It turns out that Lunella has kept the disembodied robot head of the DoomBot she and the Extraordinary X-Men captured back in issue number 17.  Holding onto a robot head whose only function appears to be hurling insults and discouragements seems like an odd choice, but it works quite well in terms of forwarding the narration.  The head acts as a sort of Dr. Watson to Lunella’s Sherlock Holms and their banter with one another acts to explain to the reader what Lunella is up to without resorting to simple exposition.

Lunella had learned some important lessons throughout the previous story-arc, yet it would seem that she still has quite a lot left to learn.  She remains overly reliant on her intellect and shooting off into the cosmos in an untested spacecraft is pretty much the epitome of leaping before you look.

The growing schism between Lunella and her parents has been percolating for quite a while now and it’s past time that the story focus on the matter in greater depth.  It would seem that Lunella doesn’t feel that her parents can relate to her; they just aren’t on her level in terms of her interests and cognitive abilities.  And Lunella is very much icing them out, assuming they won’t understand and not giving them the chance to more fully engage with the person she is becoming.  I’m starting to feel quite sad for Mr. and Mrs. Lafayette, they must be feeling like they are losing their daughter and have no idea what to do to get her back.

Perhaps this story-arc, with Illa feeling alone without her own parent, might act to show Lunella that she has been taking her own parents for granted.  We’ll see…

The art, as always, is fantastic.  Natacha Bustos’ illustration is clean and cartoony, yet she utilizes rather sophisticated panel layouts and compositions that offers a very dynamic feel.  Coupled with Tamra Bonvillain’s terrific coloring, the whole matter is just a very well executed process… it makes me feel like I’m watching an episode of Moon Girl and Devil Dinosaur rather than reading an issue.