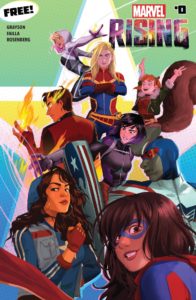 The uprising starts here as the journey toward the new Secret Warriors begins with a fun team up between Ms. Marvel and Squirrel Girl.  Brought to you by the creative team of  Devin Grayson, Marco Failla and Rachelle Rosenberg.

The adventure takes place at the Howard Stark Institute for Technological Excellence.  Kamala Khan has accompanied a group of students for a tour of the Institute and their tour guide is none other than Doreen Green (whom we can assume is interning at the institute for college credits).

The tour is rudely interrupted by a group of renegade researchers from Advance Ideas Mechanics (or AIM).  AIM is a group of scientists who stop at nothing in their pursuit of knowledge.  The group had recently reformed from villainy under the leadership of Roberto DeCasta, but apparently a fraction has splintered off and returned to its evil, mercenary ways.

The AIM goons invade the institute, apprehending the various students and forcing them to go through some sort of genetic scan.  Kamala and Doreen each seek off to change into their respective superhero guises and it isn’t long before the AIM infiltrators find themselves squaring off against the combined might of the intrepid Ms. Marvel and unbeatable Squirrel Girl!

A battle ensues with Ms. Marvel uses her embiggoning powers to grab, punch and throw the villains while Squirrel Girl flips, jumps and does the same (while also ensuring that none of the priceless items at the institute are damaged).

Both Ms. Marvel and Squirrel Girl are happily surprised to see each other.  They haven’t met before but are mutual admirers and both seem to think this team up has been long overdo.

The two gel together and get along as well as one might expect.  Both are quite similar in their sunny sense of idealism and superhero fan-girl-ism, yet are different enough that neither seems to feel threatened by the other.  Their friendship is forged almost in an instant, sealed with the glee of being able to recreate the X-Men’s signature move: a ‘fastball special,’ a special attack wherein Ms. Marvel uses her embiggened hand to throw Squirrel Girl at the villains.

It allows Squirrel Girl to access the door and, once it is open, she uses her squirrel communicating powers to let in a variable army of furry combatants.
The army of squirrel overwhelms the AIM goons and they are all defeated.  All but one, who manages to escape with the data they had come to collect.  The sole escapee dashes to a hidden alley and sends the information to an unseen benefactor, the villain who had sent AIM on this mission in the first place.

It remains unrevealed who this villain is, but they are quite pleased with the data that was collected.
Whatever genetic testing the AIM goons were conducting, it was successful in identifying a young subject possessing impressive super powers.  This subject is a teenage girl named Ember Quad, she is a latent Inhuman who has been bestowed by Terrigenesis with the ability to absorb and weaponize huge amounts of energy.  Clearly the villain has plans to use this youngster’s powers to some nefarious end.

How this villain plans to do so remains to be seen and we’ll have to wait until the release of Marvel Rising Alpha later this spring to find out.

It’s a fun outing.  Very much an all-ages comic, with action and dialogue meant to be accessible to younger readers.   The story is a touch pat, with a villain once more looking to exploit a young super powered being and weaponize their abilities for some sinister purpose.  Still, the somewhat generic nature of the plot allows for greater focus on the real draw of the issue… namely the long-overdo team-up between Ms. Marvel and Squirrel Girl.  These are a pair of heroes who have quickly become two of my all time favorites and it’s a blast to see them finally interacting one on one.

And they are as fun together as one would expect.  Sort of like seeing two kids realizing that they each love the exact same things and just nerding out over it with unbridled enthusiasm.   It’s a blast and Devin Grayson demonstrates an excellent knack for scripting the two interacting together… it definitely has me looking forward to seeing more from the duo.

Marco Failla’s illustration is clean and dynamic.  It doesn’t take a lot of risks and follows an even flow.  It’s very good art, although I think it a mistake to assume that younger and/or newer readers will have trouble reading unconventional panel composition.  Granted, this is more of a general criticism of comics directed toward an all-ages audience.
Rachelle Rosenberg’s color work is bright and vibrant; it fits with the tenor of the story, offering a more cartoon-style feel.

The issue wears its principles on its arm.  It is not at all shy about what it is trying to be.  Marvel Rising is about traditional superhero action with a more inclusive cast.  It isn’t trying to be cool or edgy in the least.   It’s a fully transparent invitation to a younger and broader audience, welcoming them to join in on the fun of the Marvel Universe.

More seasoned or jaded fans might find it all to be quite ‘cringe worthy.’  Indeed I’m rather expecting some kind off blowback, castigating Marvel Rising as little more than politically correct pandering to the social justice sect.  I hope I’m wrong.  Surely the world of super hero action is large enough to accommodate a broader audience.  Furthermore, the general health of the industry is altogether contingent on appealing to this broader audience.

I actually appreciate that Marvel Rising is so forward and unapologetic in its aim.  My only complaint is the notion that appealing to newer readers requires a straight forward and conventional approach.  The art and story here is good, but plays it rather safe.  If the project want to succeed in attaining its goals it may be necessary for it to take more risks.

I definitely recommend checking it out.  It’s fun, it’s free and worth your time

Three and a half out of five Lockjaws.