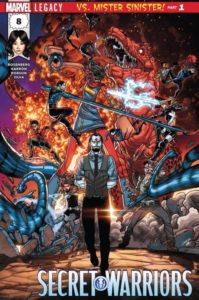 The next chapter of the adventures of The Secret Warriors begins here, by the creative team of writer, Mathew Rosenberg, illustrators, Javier Garrón and Will Robinson, and colorist, Israel Silva.

The very much lives-up-to-his-name Mr. Sinister has been kidnapping young Inhuman subjects as part of some nefarious scheme and this has included Inferno’s infant niece.  And this has proven reason enough to get the band back together as The Secret Warriors reform to hunt down Sinister’s forces and rescue Inferno’s niece.

The tale opens up on a school playground somewhere in Dearborn Michigan where a group of youngster are playing with action figures.  These kids are interrupted by Sinister and his accomplices, The Dark Beast and a group of bizarre and monstrous creatures.  It turns out that one of these kids possesses genetic marking identifying him as in some way special… that he is a Mutant or Inhuman.  Sinister has some sort of device, what looks to be a brain in a mechanical box, that acts as a detector for genetic aberrants.  And having identifying the subject, Sinister’s goons abduct the child, putting a bag on his head and hauling him away.

Although it is illustrated in a  somewhat comical fashion, it’s actually a rather jarring and frightening scene.

The narrative quickly shifts to Venice, Italy, to the executive offices of The Ennilux Corporation.  Ahura, the son of Medusa and Black Bolt and current CEO of Ennilux has come to the branch headquarters to see what his newest employee, Karnak, has been up to.  Ahura had hired Karnak to work out kinks in the company’s global shipping network, yet he has come to Karnak’s office to find it transformed into some dimly lit den, with he windows boarded up and plethora of notes tapped to the wall.

Karnak emerges dressed in nothing more than a loin cloth.  He informs Ahura that he already has the branch’s shipping network up to 98% efficiency, but that he must now be allowed to continue with his work.  Ahura knows that Karnak is up to much more than he is saying, but is quickly ushered out of the room.

Once more the narrative shifts, this time to the suburbs outside of Toledo, Ohio.  This is where Dante’s sister, Gabby, lives and the scene of the crime when The Dark Beast had kidnapped Gabby’s baby.  Gabby and the reformed Secret Warriors gather around, spitballing ideas over how to locate the abducted child.

Gabby’s consternation over her missing daughter is compounded by the Warriors constant bickering… for which Ms. Marvel apologizes, noting that bickering is pretty much what this team does best.
Moon Girl suggests utilizing Karnak, but Quake disagrees; Ms. Marvel opts to contact the X-Men, but Dante refuses seeing them as being part of the problem.  Their argument is interrupted when a loud thump echo out from up stairs.

The Warriors rush to investigate and discover that The Mutant and X-Man known as Magik has teleported into the home.  After a brief and tense standoff, Magik lowers her sword, stating that she has come to aid the Warriors.

The Dark Beast had escaped on her watch and she is offering her assistance as recompense.  And it turns out that Magik has learned of The Warriors’ location by way of ‘The Forum,’ and internet chat board in which the various young heroes (and Hercules) all talk with one another, gossip and exchange mission details.

Moon Girl had initially contacted Mass Master hoping The Power Pack might assist them.  Mass Master then spread the matter to other young heroes, it gradually leading to the younger X-Men and finally to Magik.  This is all merely a narrative tact for explaining how Magik might know the location of The Warriors, but is also my favorite part of the issue and I hope to see much more of The Forum in other comics; it’s a great means of tethering together all of the younger (or as Lunella phrases it, ‘cooler’) heroes out there (…and Hercules).

Anyways, Dante is reluctant to accept Magik’s help, but his sister won’t hear of it.  She is desperate to get her daughter back and willing to take whatever help is offered – even if it comes from a creepy teleporting young woman with a giant sword and overly revealing outfit…

And Magik’s aide proves helpful indeed.  Her ability to teleport the entire squad through portals that tie through a hellish limbo enables the team to investigate multiple locations in tracking down the Dark Beast.  Although traveling in this fashion ends up being extremely disquieting for the team, especially Dante who cannot help but to vomit with every jump.

The various leads the team track down are provided by Moon Girl and her trusty  laptop as she utilizes her extreme intellect to search the internet for purchases of the kind of laboratory equipment the Dark Beast might require for his diabolical plans.

A cut-away scene shows Karnak at his own computer, connected in to Lunella’s search.  Here I must admit I was a bit confused as to what was going down.  It is not clear (to me at least) whether Karnak was assisting Lunella in her search, or actually obstructing and rerouting her so to cover up his own involvement.

Whatever the case, Karnak’s interference leads the team to an industrial lot in Clearwater, Florida.  There the squad comes across what appears to be just a normal work plant.  Once inside, however, the Warriors encounter a host of monstrous foes.  These creatures seem to be some sort of test subjects whom the Dark Beast has mutated and stitched together so to create powerful minions.

The team engages the monsters.  One gets the drop on Quake, but Inferno has her back and shoot it down (and this leads to a rather embarrassing exchange where Dante tries to act cool and flirty with Daisy but trips over his words).

In any case, these monsters prove no match for the Warriors and they quickly defeat them.  In the wake of the battle, Moon Girl ventures deeper into the facility and discovers a huge antechamber where countless kids are imprisoned in some sort of stasis chambers.  It is not clear who these kids are and what they are being used for.  Are they all latent Inhumans? are some Mutants?  Are they going to be okay?  It all remains to be seen, but it is here that the issue comes to an end with the promise of continuation next month.

This was a wild ride with lots of fun details and interactions between the characters.  The overarching plot remains a bit nebulous.  It’s not clear what Sinister and The Dark Beast are up, nor how it may or may not connect to what Karnak is doing at Ennilux.

The Warriors’ protracted search for The Dark Beast felt very much like just an excuse for funny banter and sight gags.  To this extent, the issue as a whole doesn’t lift above the sum of its parts… which is fine in that the interchanges between the characters is so much fun.

The highlights of these interactions include Quake and Magik bonding over their both feeling annoyed by Ms. Marvel, the running gag of Dante puking every time the team teleports, Karnak’s particular idea of what constitutes ‘business casual’ attire, Dante’s botched effort to flirt with Daisy, and, of course, The Forum.  Getting to see The Forum in and of itself is worth the cover price…

Javier Garrón illustrated the majority of the issue, with Will Robinson illustrating the scenes in Italy between Karnak and Ahura.  Both are terrific artists, but I did not feel the two styles gelled together well.  The shift in artistic styles was a bit jarring and sort of took me out of the story, although this is likely a matter of personal tastes and I can imagine there are other readers who like the shifting of artistic styles.

Garrón’s knack for facial expressions is heavily leaned upon in Rosenberg’s script.  He really excels at capturing gestures of exasperation, annoyance, mirthfulness and confusion on the character’s faces.  And this really hammers home the punchlines in the dialogue.  It can be an easy matter to take for granted, but Rosenberg and Garrón work together especially well.

And Garrón’s ability to relay facial expression on a more subtle scale is especially impressive considering the high number of panels he squeezes onto the page.

I’m actually not a huge fan of how Garrón draws monsters, they’re a little too cartoony for my tastes, but once more this is just a matter of personal preferences.

As always, Israel Silva’s coloring is exceptional throughout.

From it’s first issue, Secret warriors has been a very character-driven book.  The plots have often been secondary to the development of the characters, and this continues in this new arc.  While the first two arcs of Secret Warriors focused very strongly on Daisy, this one feels much more evenly spread out with all of the characters getting relatively equal attention.

The inclusion of Magik works quite well.  The hows and whys of her joining the team are kind of shoe-horned in, but it works just fine and Magik fits in with the team right off the bat.  Her stodgy contempt for Ms. Marvel’s idealism and challenging of Quake’s leadership skills fits in nicely with the general acrimony that existed between the teammates to begin with.  Malik’s inclusion looks as though it will help to further the development of the Warriors; although it is yet to be seen whether or not this will be bilateral, if she will grow or change by way of being apart of the team herself.  Time will tell.

All in all, a really fun read and definitely recommended.  Three and a half out of five Lockjaws!