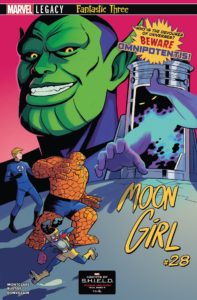 The Fantastic Three story-arc continues on from the peerless creative team of Bredan Montclare, Natacha Bustos and Tamra Bondvillain.

Egads!  The terrible Omnipotis is coming.  It’s a being of pure antimatter (or something to that effect) that could destroy not only the earth but the entirety of the universe.  It’s exactly the kind of threat that used to be right up The Fantastic Four’s alley.  Unfortunately, the Fantastic Four are no more and Moon Girl has had to team up with the remaining members, The Thing and The Human Torch, in a desperate effort to repel this oncoming terror.

It’s revealed that the Omnipotis has been beckoned to earth by The Super Skrull, intent on destroying all of reality as vengeance for the eradication of the Skrull Throne-World by Galactus (an event depicted way back in Fantastic Four Vol. 1 #257).  Moon Girl, The Torch and The Thing do there best in battle against The Super Skrull, but he’s a tough customer and the ‘Fantastic Three’ still don’t quite have the whole ‘working as a team’ thing down.  Fortunately, the intervention of the Silver Surfer is enough to turn the tide.

The Super Skrull realizes he’s met his match and trips up Galactus in order to facilitate his escape.

Back in Moon Girl’s underground lab, HERBIE explains to the gang the nature of the threat that The Super Skrull has brought to earth.  Part of HERBIE’s original programming was to detect and search out cosmic threats such as Galactus; and this same programing allows the droid to understand how The Super Skrull has gone about summoning the Omnipotis… as well as how the team might succeed in preventing this calamity.

In a previous issue, we saw a villain (a cad who turned out the be The Super Skrull) thieve a number of key items, gold, conductive cable, some experimental quark particles…  HERBIE explains that these items are all ingredients representing the four fundamental forces: gravity, electromagnetism, the weak force and the strong force.   Somehow, The Super Skrull has combined these key physical interactions to open a gateway to a nether-realm through which the Omnipotis can enter into reality.

This Omnipotis has not yet arrived so there is still time to save the day, but Moon Girl does not feel confident that she, Ben and Johnny have what it takes to save the day.  They are missing a key ingredient of their own and Lunella sits down to try and figure out who exactly they need to help them succeed.  And it is with this mysterious cliffhanger that the issue comes to an end with the promise of continuation…

Field Theory, the notion that all physical interactions can be boiled down to four fundamental forces, is a rather highbrow scientific matter… not exactly the kind of  thing one expects to encounter in an all ages comic.  Still, Lunella is the smartest of the smart in the Marvel Universe, so I suppose it’s suitable that she should cope with high-order theoretical psychics…
The way HERBIE and Lunella talk about the matter is sort of similar to instances in science fiction where characters blurt out seemingly nonsense scientific concepts simply as a means of furthering the plot.  What’s fun here is that this is not actually nonsense, but rather a matter that is rooted in real-life science…

Here’s the deal, it is theorized that the four forces of gravity, electromagnetism, the strong nuclear force, and the weak nuclear force are all inter-related and might be able to unite into a singular force, a fifth force otherwise known as ‘Dark Matter.’   Unfortunately, even the most advanced particle accelerators cannot produce enough energy to prove this.   What scientists have been able to see is voids that occur when particles are slammed against one another at enormous speeds… voids that suggest the presence of dark matter, but cannot prove it or fully probe it.

It would seem that The Super Skrull possess the knowledge to build a super advanced type of particle accelerator, a machine powerful enough to not only observe dark matter, but open a doorway to the dark matter universe (through which this Omnipotis creature can emerge).  Neat…

In some ways, The Fantastic Four themselves can be seen as representational of the four fundamental forces…  the Human Torch as electromagnetism; The Invisible Woman as gravity; The Thing as the strong nuclear force; and Reed Richards as the small nuclear force.  That last one, Reed as the small force, requires a bit of a jump in that Reed’s real power is his intellect and the small nuclear force can be seen as sort of similar to the miniature explosions that occurs between neural synapses in the process of thought.

More important to the context of this story, however, is the ways in which the Fantastic Four relate to primary aspects of human character.  Herein Johnny represents bravery and decisiveness; Ben represent strength and selflessness; Reed represents intellect and rationality; and Sue represents emotionality and connectivity.  Together they created the fifth force of ‘family’ and were unstoppable.

It is this last ingredient, the sense of heart provided by Sue Storm, that The Fantastic Three are lacking.  It is that missing component that Lunella must ferret out and add in if she Ben and Johnny are to succeed.

The answer seems obvious… to me at least.  The teams needs Devil Dinosaur!

He may be a big lumbering brute, but there is something pure to Devil D…  He’s just lovable.  And perhaps more importantly, Devil D elicits in Lunella deeply parental feelings.  She loves him and looks out for him; he acts to melts the cold logic of Lunella’s thinking and brings out the squishy sometimes irrational factor of emotionality.

Adding Devil Dinosaur to the fold will give Lunella, Ben and Johnny the missing factor they need to prevail against the Super Scrull and his doomsday plan.   It’s sort of like a superhero version of alchemy that only exists in comic books.  The recipe of Reed, Sue, Ben and Johnny was key… remove any one of those ingredients and the soufflé wilts.  It is only together that they become something more than the sum of their parts; they create that fifth fundamental force and that is how they prevail.
Lunella now needs to locate that fourth variable, the final piece of the puzzle needed to defeat Super Skrull and stop the Omnipotis.  I could be wrong, but I’m feeling very confident that this fourth ingredient will be Devil Dinosaur.  …we’ll see.

Anyways, the art and colors provided by Natacha Bustos and Tamra Bonvillain are, as always, just exceptional.  Closing in on thirty issues, I’ve long since run out of verbs and adjectives for relaying how awesome I think these two artists are.  They rock… ‘nuff said.

The plot is a touch heavy on exposition, relying on HERBIE and Lunella dialogue to spell out a lot of the headier matters.  Still, this is fine by me in that it elicited a lot of exciting ideas regarding Unified Filed Theory and the comic book version of how team composition can mirror Field Theory.  Really cool stuff.
Another fun and thought-provoking romp.  Definitely recommended.  Four out of five Lockjaws!