You are here: Home / Reviews / Death of The Inhumans #4 Review (spoilers) 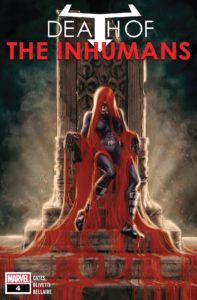 We’re closing in on the end of the end as writer Donny Cates, illustrator Ariel Olivetti and color artist, Jordie Bellaire offer up this penultimate installment of the miniseries.

A fanatical faction of the Kree Empire have sacked New Arctillan and slaughtered its citizens.  Led by their mysterious war chief, a being known only as Vox, these villains have captured Black Bolt and a ghastly operation was conducted on him, removing his larynx and robbing him of his most significant power.  Medusa and what remains of the Royal Family have fled to a distant planet in the cosmos where they have elicited the aide of the powerful Korbinite bruiser known as Beta Ray Bill.

It turns out that Bill and Lockjaw were old friends and brothers in arms.  The two had had many adventures together and forged a bond that was quite important to them both.  Learning that Lockjaw has been among the many casualties of the Kree’s assault is more than enough to motivate Bill to fight alongside The Inhumans.  Although he is clear that his doing so has’t nothing to do with The Inhuman peoples; what he does he does for the dog.

Back on Hala, Black Bolt has managed to free himself from his imprisonment and cuts his way through the Kree forces.  He no longer has the full might of his voice, but he can manage a whisper and, at close range, this whisper is more than enough to cause significant damage.

Black Bolt fights his way through the Kree soldiers yet knows he is outmatched when he comes to face several battleships that flank him.  It is here that Vox catches up with him and he continues to goad the former king with insults and cruelty.

All that the Kree have needed from Black Bolt has already been taken.  They no longer require him alive and Vox unsheathes his menacing scythe looking to kill the midnight king once and for all.  Black Bolt is able to dodge Vox’s attacks, but the villain is too powerful…  Black Bolt is outmatched.

Vox’s mouthguard opens, revealing a skinless mouth and a skeletal smile.  It looks as though he is going to deliver his killing blow.  Before he can, however, Beta Ray Bill’s powerful hammer, Stormbreaker, careens forth and strikes Vox in the face.

It’s a devastating blow, leaving Vox seemingly defeated.  Medusa and the others race to the scene and we’re treated to a brief, tender of scene of Medusa and Black Bolt reunited.

A severely wounded Vox attempts to crawl away.  Crystal stands above him, needing to know who this monster is.  It mutters, begging that she stay back. Crystal seems to recognize the voice, she can almost make out his face…
Just then an energy emits from Vox’s body.  The emission engulfs Crystal and dissolves her away.

Karnak leaps forward, delivering precision strikes one after another until the monster is dead.  It is only then, with Vox’s helmet fully destroyed, that his identity is revealed.  He appears to be Maximus!

But how can this be so?  Maximus was one of Vox’s casualties during the attack on New Arctillan.  The others had seen video footage of Vox dissolving Maximus with a blast emerging from his mouth.  What is going on here?

A horrifying hypothesis begins to dawn on Karnak and the others.  Perhaps Vox is not just one villain, but many… a legion of Frankenstein’s monsters composed of stolen powers stitched together.

The scene shifts to show Crystal having been instantly teleported to some unknown locale.  She seems to be in a kind of assembly-line laboratory.  She sees countless Inhumans trapped inside chrysalis-style pods.  She recognizes Triton among them.

This, it would appear, is how the Kree have been creating their new weapons.  Taking Inhumans and utilizing surgical procedures to extract powers and repurpose them into composite beings.  Crystal is trapped on a kind of operating table and unable to escape.  She screams as Kree surgeons stand by and begin the process of disassembling her.    A new set of Vox’s armor awaits nearby, waiting to be filled by whatever pieces of Crystal and other Inhumans have been extracted.

There are dozens of such armors, countless Vox soldiers ready to be filled with repurposed parts and pieces of the helpless Inhuman hostages.
And it is on this horrifying note that the issue comes to an end with the story to be concluded in the next and final chapter.

The Kree had originally created The Inhumans centuries ago.  And while the progeny of their experiments created powerful beings, The Kree were never able to fully utilize them as the weapons they were meant to be.  These Inhumans had wills of their own and they could not be forced to bend to the will of The Empire.

Well, it would appear that this new faction of The Kree have devised a solution to this problem.  The Inhumans could not be controlled, so instead those deemed worthy are captured and collected; their powers removed and repurposed, transported into golems of stitched together flesh and organs, somehow imbued with a consciousness obedient to the Kree Empire.

While this makes for an intriguing (albeit gory) twist, there still remains a lot of questions of how all this actually works.  How did Vox possess Lockjaw’s teleportation powers before Lockjaw himself was captured?   How did the Kree get ahold of Triton when he was seemingly blown apart back on that planet where the Universal Inhuman Queens were slaughtered?  Are Inhuman powers actually localized within organs and tissue?  Is Maximus really dead?  And what do these Kree do with their Inhuman victims after the surgeries are conducted?

I imagine these questions will be addressed in the final issue, but I’m not sure I want to know the answers… especially considering the cover art preview showing Black Bolt kneeling before a butchered Lockjaw.

Vox’s grisly origins make for a neat twist and shocking revelation.  And there are some glimmers of hope offered up that things might end up not as bad as it may seem when the story finally concludes.  Both Naja and Sterlion are shown among the captured Inhumans suggesting that they may end up surviving when all is said and done

These glimmers of hope notwithstanding, there continue to be aspects of this story that sit quite poorly with me.  There is an element of sadism in all of this.  There are many stories where the hero or heroes are beaten down low only to rise back up triumphant.  And this may prove to be no different… but it kind of feels over the top.  Is it really necessary to push the Inhumans so deep into the mud?

Surgical dissection is perhaps the most defiling things that can happen to a character.  It is the ultimate in bodily invasion and desecration.  It is a kind of non-sexual rape and I sort of shudder at the idea that these characters who I love so dearly are being offered up as victims for whatever readers out who get off on this sort of stuff.
This is not a book I would read were the Inhumans not involved.  The writing is good, the art is good, the coloring is fantastic… but this story is gross.  The sadistic quality is quite unsettling.

Introducing Beta Ray Bill into the story is a neat idea.  He’s a cool character and I very much enjoyed the quick flashback story of him and Lockjaw battling Blasstar and his forces (notice that Lockjaw is ‘worthy’ enough to lift Stormbreaker!).  And yet Beta Ray Bill’s involvement is itself something of another insult thrown at the Inhumans.  Bill gets to be the one who defeats Vox; and he does so easily.  Gorgon and Crystal once more sit around and do nothing.  Again it is cool that Bill is involved, but why not have it be Crystal who defeats Vox, or the combined efforts of Crystal, Gorgon, Karnak and Medusa?  Four issues in and these characters have done nothing but sit on their asses.

It all adds to my paranoid sense of this series being something akin to a type of  punishment.  The Inhumans television show was an abject flop and the comics featuring the Royal Family did not sell especially well.  On top of that, there were many who were angry and outraged that Marvel should have the audacity to try and elevate The Inhumans in the Marvel Universe.
The Inhumans will never be The X-Men and there is no doubt that trying to use them to in some respects replace the X-Men was a mistake.  Fine.  That whole deal is over.  Yet rather than just allowing The Inhumans to return back to the fringe margins of the Marvel Universe they are instead offered up for some weird public flogging.

Again, this is a paranoid notion and I’m aware of its hyperbolic qualities.  I’m kind of just venting so apologies if I am coming across as overreacting.  No one reads comics in a vacuum and things going on in the real world has me feeling especially raw… most certainly affecting how this story resonates with me on a personal level and inhibiting the capacity to see it in a more objective manner.

With that in mind, Death of The Inhumans #4 has some cool action, neat art and a cool twists.  Yet the issue itself left me feelings cold, angry and kind of depressed.  Two out of four Lockjaws.