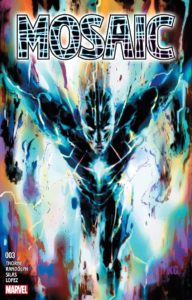 Morris’ new life as the Inhuman, Mosaic, has come with a lot of surprising revelations.  In this issue, Morris discovers some of the limitations of his powers as well as the sad truth that much of his former life had been built on lies.

While the shadowy Brand Corporation tries to ascertain the status and whereabouts of ‘Pops’ Sachett’s son, Morris himself returns to his swanky midtown apartment only to find Fife crashed out there.  Fife was the young man whom Morris had possessed when he first used his powers.  It seems that this possession entails something of a two-way street and Fife was left with quickly fading memories of who Morris is and his life prior to Terrigenesis.  Furthermore, the fact that Morris had once possessed Fife somehow enables Fife to see him in his ghostly form.

Morris’ girlfriend, Tia, and her personal assistant, Cece, arrive at the apartment to find Fife.  They cannot see Morris and assume that Fifi is a ‘stalkarazzi’ there to pilfer Sacket’s personal items.  Cece is actually a serious badass and beats the crud out of poor Fife with her tablet.  Morris attempts to leap back into Fife’s body so to explain, but discovers that he’s locked out; it would seem that Mosaic can only occupy a given body once and never again.

Morris considers leaping into Tia’s body, but decides it would be too much of an invasion of his girlfriend’s privacy… though he has no such compunction about invading the privacy of her assistant and instead possesses Cece.

Taking in Cece’s memories, Morris discovers the alarming origins of his and Tia’s relationship.  It turns out that Tia was actually hired by Morris’ father to merely pretend to be Morris’ girlfriend.  Morris’ dad felt that it was a necessary move to improve Morris’ Q-ratings among the female demographic.  And it would be mutually beneficial to Tia, whose own career as a pop-star was beginning to falter.

Tia doesn’t love Morris, she never did.  Indeed she’s in a relationship with Cece and she has only pretended to be with Morris for money and to enhance her own career.

It’s devastating for Morris to discover all this… to learn that his relationship with Tia has been a scam orchestrated by his father.  None of these people really care for him, they all just want to use him.   Livid, Morris is intent on finding his father and having it out with him.  Yet his dad is all the way on the other side of town and Morris has no patients for public transportation.  That is when he sees The Amazing Spider-Man swing by.

It’s too good an opportunity to pass up.  Mosaic chases after Spidey, leaping from body to body until he finds a bicycle messenger with a nice set of wheels.  Possessing the bicyclist, Mosaic continues his pursuit until he finally gets in range of Spidey and leaps into his consciousness into the webslinger.  Contact.  And the issue ends with Spider-Man, possessed by Mosaic, clinging to a wall.

Not a whole lot occurs in this issue.  We get a lot of exposition about the nature and limitations of Mosaic’s powers.  Those whose bodies he possesses retain trace residues of Morris’ memory; plus gain the ability to see Mosaic in his spectral form.  Yet he can only possesses a given body once and appears to be locked out once he vacates that body.

We also learn that much of Morris’ former life was a grand illusion predicated by lies and subterfuge.  Tia never loved Morris; she loves Cece.  And Morris’ father is shown as a duplicitous schemer who will go to deplorable lengths to mold his son into a star and cash-cow.  What is made abundantly clear is that Morris’ seemingly perfect celebrity life was little more than an illusion and I have a feeling it won’t be something he especially misses when he finally truly embraces his new life as an Inhuman.
The lack of decent action in the issue is made up for some heart-wrenching moments and terrific art.  It’s especially wild to see Spider-Man illustrated by Randolph, Silas and Lopez… it’s a frame-worthy panel.

I definitely like where Thorne and Randolph are going here.  The deconstruction of celebrity culture is a worthwhile endeavor and the nature of Mosaic’s powers works well with the metaphor.  Although I also feel like this issue should have done more to move the plot forward and what could have been condensed into a third of an issue was drawn out into an entire issue.  Although it could be that I’m just overly eager to see Mosaic interact with the other Inhumans.  We know that some point down the line he throws in with The Inhumans of New Attilan (as evidenced by his appearance in Uncanny Inhumans #11) and I’m very excited to see how this comes about.

Recommended.  Three out of Five Lockjaws