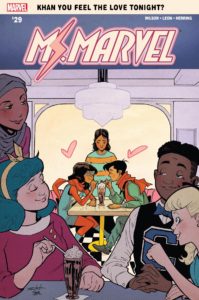 Bruno’s back and Kamala becomes an aunt in the latest issue of Ms. Marvel from the creative team of G. Willow Wilson, Nico Leon and Ian Herring.

Things have been rather hectic of late, with Ms. Marvel and her pals having to take on the evil Inventor… but the villain has been defeated and now the real drama is ready to ensue.

The story starts off at the maternity ward where Kamala’s sister-in-law, Tyesha, is about to give birth to her and Aamir’s child.  It’s an intense ordeal, too much so for poor Aamir, whose kicked out of the delivery room after he faints.  Fortunately, everything turns out fine and it’s not too long before Kamala is introduced to her nephew, Malik.

Aamir is overwhelmed by the joys and terrors of parenthood.  Within an instant he is dedicated heart-and-soul to this tiny human and is just consumed with the anxiety that he can never live up to the extreme pressures of being the ideal parent.

Kamala, meanwhile, is on cloud nine.  She’s in love with little Malik, loves being an aunt, and it all just fills her with a bubbling joy.  Some time later, she goes out on patrol as Ms. Marvel and just dances across the rooftops, feeling like a Disney princess in the first act of a movie where they sing and dance over the joys of their lives.

It’s all interrupted when The Red Dagger jumps in to join her.  Ms. Marvel has had mixed feelings about this mysterious young hero who has so suddenly relocated from Karachi.  She feels a bit defensive toward him in that he sometimes acts in a way that has made Kamala feel as though her idealism stems from a place of  naïveté.
Yet Red Dagger catches her off guard, when he professes how much he had missed her, how he’s thought about her constantly and just feel that she is wonderful.

Kamala is often very hard on herself and to hear this debonaire hero profess such admiration kind of sweeps her off her feet.  Before she knows it, she and Red Dagger are kissing atop the minimart.  Kamala’s first kiss!  And it’s a good one.

Yet the romantic moment is cut short when Ms. Marvel realizes they are being watched.  She looks down to see Bruno, who has just arrived back from Wakanda, glaring up at her… clearly alarmed to see his longtime crush making kissy-face with some handsome stranger with perfect hair.

Bruno had been living in Wakanda and his school in the Golden City has gone on break.  He’s returned home in order to try to figure out his future – should he stay in Wakanda or return home to Jersey.  He’s accompanied by his roommate, Kwezi, who has taken the opportunity to explore America.

Kamala and Bruno meet the next morning before school.  They catch up, likely hoping that they can slip back into being lifelong friends the way things had been in the past.  It’s not to be.  Too much as changed.
Bruno is in love with Kamala, he has been for as long as he can remember.  Kamala had believed that Bruno blamed her for the accident that left him so badly injured.  And though she’s very happy that he no longer hates her, it’s clear that Bruno still doesn’t agree with Kamala’s double life as Ms. Marvel.  He wants things to go back to how they were; she wants him to accept her for who she is.

In Bruno’s rush to come see Kamala, he has entirely forgotten that when he initially left for Wakanda, he had basically abandoned his then girlfriend, Mike.  Mike sees him when she arrives for school and it is crushing for her.  It’s quite clear to her that she hasn’t at all been in Bruno’s thoughts and she runs off in tears.  Bruno doesn’t seem especially phased by it, more intrigued in learning that his classmate Zoe has recently come out as gay.

As all this unfolds, Kamala and the gang are also introduced to a new student at their school… a brash, glamorous and conceited ‘mean-girl’ named Kaylee Kirk.  She’s a total snob, but also quite attractive, and she very much catches Zoe’s eye (much to Nakia’s chagrin; she’s not going to stand by and watch her bestie fall for such poorly mannered glamortant).

Artists Nico Leon does a great job at capturing the look of abject befuddlement on Bruno’s face as he takes in all that has changed in his absence.

After school, Kamala catches up with Bruno at the Circle Q, where they continue their conversation.  Bruno explains the ways in which Kamala’s becoming Ms. Marvel was so difficult for him.  They had been such close friends, but Kamala’s priorities changed after she went through Terrigenesis.  She became a masked superhero and Bruno was cast down to the trusty sidekick – a role that left him feeling unappreciated and left behind.

Hearing Bruno express his feelings in such a straight forward manner has a dramatic effect on Kamala.  It all leaves her hugely confused and conflicted.  She dashes away, b-lining to her local Mosque to seek council from her Masjid, Sheik Abdullah.

This is where the issue really comes to life.

Sheik Abdullah is such a wonderful character and his depictions have always maintained a near uncanny balance of humor, poignancy, snark and reverence.  Furthermore, the conversation he and Kamala have re-centers the story back onto Kamala and her ongoing struggles to grow, learn and become the best person she can.

Navigating around keeping her dual identity a secret, Kamala explains that she had kissed a boy, might actually love a different boy, and doesn’t have the faintest idea what to do.

Sheik Abdullah has to admit that when it comes to young romance he often feels it represents a great failing in his effort to guide those who come to him for advice  When one is young, everything felt so monumental, romantic interests were overwhelming and seemed the biggest thing in the world.  As one grows older, however, recollections of the intensity of young love tends to fade, leaving the older generation Ill-suited to truly relate to these confused, love-struck kids.  It becomes essential for someone in Sheik Abdullah’s place to think back and fully remember what it was like to be so young, how every decision felt unbearably crucial and world-changing.

Ultimately, Sheik Abdullah’s guidance is that Kamala should slow down, understand that she has room to make mistakes, and follow her heart as best she can.  It’s sage advice.

Elsewhere, Zoe seeks out new girl, Kaylee Kirk.  She just wants to be friendly, welcome Kaylee to the school.  Kaylee is disinterested in any ovations toward being friends  She’s angry, she’s mean, and it would appear that she possesses super powers.  In the heat of barking her dismissal of Zoe’s friendship, Kaylee clutches at the metal of the school lockers… squeezing and contorting the metal as though it were a soft clay.  She then marches off leaving poor Zoe feeling rather alarmed.

I’ve no idea who this Kaylee Kirk is, what her deal is nor the nature of her apparent super powers.  With her being so angry, so mean, and so strong, however, it’s a rather good bet she may quite soon become a threat that our hero, Ms. Marvel, with have to face off against.
Unfortunately,  this matter, along with Kamala’s romantic crisis will have to wait until next issue.

There were some parts of this issue I quite liked, as well as a few I didn’t at all care for…

I enjoyed the change of pace, focusing more intently on Kamala’s emotional development and struggle with the onslaught of feelings that are so endemic to being a teen.  After her relative absence in the previous arc, it was nice to see Kamala and her inner life so center stage.

And her discussion with Sheik Abdullah was the highlight of the issue, managing to be both funny, touching and profound all at the same time.  I liked the way in which Sheik Abdullah’s advice paralleled with Aamir’s being so overwhelmed by the prospect of parenthood.  The advice Kamala gleaned could just as easily apply to Aamir and his own struggle.  Every stage of life can feel like a bombardment… the only way forward is one step at a time, learning gradually, understanding perfection is unattainable, and just trying to do the best you can.

As for what didn’t work so well for me, I found the pacing a bit off  The narrative made some odd jumps and the scenes didn’t move with the same degree of effortless fluidity that I’ve come to expect from this book.
Kaylee Kirk’s introduction felt obtrusive, characters seemed to be coming and going all at once and Kwezi was sort of wasted as comic relief (though he did have some very funny lines).

Nico Leon’s art was terrific as usual, yet his line work and panel composition is not as crisp and dynamic as it had been in the previous arc.

These quibbles on my part may be just that, quibbles… small, unimportant complaints that actually stand in for what actually rubbed me the wrong way.  That being that I just don’t really like Bruno.

I know I’ll catch heat from pro-Bruno Ms. Marvel fans out there, but for me the character just kind of perturbs me.  Yes, he’s had a difficult life, but I don’t think he’s treating Kamala fairly and I’m rather disappointed to find that Kamala may actually have feelings for him.

His relationship with Kamala all too often feels transactional… like he feels deserving of her love because he’s been a good friend.  The injuries he sustained in the civil war II story were entirely his own fault, yet he blamed Kamala; he basically got Kwezi to help him by acting pathetic and eliciting pity; the way he has treated/is treating Mike is altogether inexcusable.

I’m likely not being fair here… but I just don’t like Bruno.

I’d much rather Kamala not have a romantic interest, or her be with Kareem as opposed to her being with Bruno, whom I see as kind of manipulative and self-centered.

Here of course I’m speaking entirely as a fan with a fan’s opinion and not some objective reviewer.  We’re closing in on fifty issues of Ms. Marvel and she has definitely become a fictional character I care a great deal for.  And as such, I want the best for her and feel quite protective.
I guess I’m worried Bruno will end up hurting her.