You are here: Home / Reviews / The Royals #4 Review (spoilers) 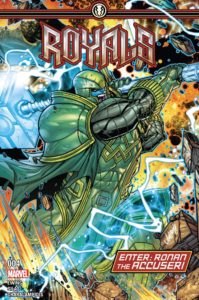 Once more the issues starts off with a cryptic prologue set thousands of years in the future.  The last Inhuman (whom we now know to be Maximus) looks over a battered and altered world (which we now know to be Earth).  A sickly giant riding atop a mutant pterodactyl ferries Maximus toward an alien vessel.  The narration mysteriously indicates that the last Inhuman is on his way to meet ‘the accuser.’

The scene shifts to the present and the scorched, deadened world of Hala.  The former capital planet of the Kree Empire had been attacked and laid barren by The Slaughter Lords during the Black Vortex story-arc (a cross-over that ran through the pages of Captain Marvel, Nova, All New X-Men and Guardians of The Galaxy a while’s back). Ronan himself was greatly empowered by the celestial energies of The Black Vortex, yet he was ultimately helpless to prevent Planet Hala’s demise.

Alone and besieged by grief, Ronan now spends his days walking amidst the smoldering ruins of Hala.  His solemn task to roam the immolated world and recall the names of the countless dead.  His solitary vigil is interrupted as his heightened senses detects the approach of The Inhuman vessel, The Asterion.

Aboard the Asterion, Captain Swain is tasked with plotting a landing trajectory whilst also putting up with the near constant nattering and insults offered up by Maximus.   Swain has little choice but to keep Max in the cockpit with her, the nature of the two Inhumans’ powers act to cancel each other out, mitigating the threat posed by the treacherous Maximus.

Of course this is all much to the consternation of Gorgon, who would much prefer Max locked in the brig (or better yet jettisoned out an airlock).  Maximus is quite happy to offer Gorgon an acerbic retort, stating that their mission is a scientific one with little use for a muscle-brained enforcer with a bad back.

Their spiteful patter is interrupted by a proximity alarm and Swain’s announcement that the allegedly dead world of Hala has fired an attack.  Evasive maneuvers prove fruitless as Ronan comes hurdling into orbit and uses his hammer to tear through the starboard wing of the craft, causing catastrophic damage to the Asterion.

For a brief instant Swain mistakes Ronan’s hammer for that belonging to Thor, wondering allowed whatever it may have been that elicited the wraith of the god of thunder.

The damage to the ship has taken out the escape pods and the ship and its crew barrel toward the surface at what will surely be a terminal velocity.  Marvel Boy, Crystal and Flint dash into the control bay, yet there seems to be little anyone can do to save them.

Confident he has the solution, Marvel Boy utilizes an advanced tool derived from the alternate technology of his home reality.  It’s called the ‘pocket battlefield.’

This difficult-to-describe weapon first showed up in the pages of the original Marvel Boy miniseries; and then once more in the miniseries, Civil War: Young Avengers/Runaways.   Fastened into the circuitry of his wristband, the pocket battlefield allows Noh-Varr to extend a spherical field around him and anyone in his vicinity; within this sphere, Noh can control and manipulate the properties of time, gravity and inertia.  The effects only last a matter of moments, but it is long enough to enable The crew to survive the turbulent crash of the Asterion completely unscathed.

Armed with laser rifles, Medusa leads the squad from the wreckage of the ship, ready to take on whatever foe had fallen their ship.  They discover that this adversary is their one-time ally and the former husband of Princess Crystal, Ronan the Accuser.
Yet it is a very different version of Ronan.   His transformation via passage through the Black Vortex has remade him into a veritable giant, possessing a host of new, formidable and mysterious powers.

Ronan is displeased to see The Royals.  Not only are they trespassing on the sacred memorial of the dead planet Hala, but Ronan holds the Inhumans as in-part responsible for the fate that had befallen his home-world.

Following the War of Kings event, The Inhumans of Attilan had been granted lordship over the war torn remnants of the Kree Empire.  Black Bolt ultimately relinquished Inhuman dominion over the Kree as part of a pact with The Supreme Intelligence…
and yet The Supreme Intelligence is now dead and Ronan accuses The Inhumans of growing bored with their responsibilities to The Kree, abandoning them to their fate and just as guilty and culpable for Hala’s fate as those who had destroyed it.

Ronan’s claims are baseless, clearly warped by his anger and grief.  Crystal, his one time love and wife tries to reason with him, but it is of no avail.  Gorgon losses his patience and attacks, yet he is ill prepared for Ronan’s impressive new abilities.

Ronan strikes down his hammer and a mysterious energy exude by from it, seizing each of The Royals in their tracks.  The energy appears to place its victims in some sort of trance where they are engulfed by hallucinations centered on feeling of intense guilt over past actions and feelings… each drawn psychically from their memories and imaginations.

Gorgon’s hallucinogenic experience is shown first and foremost; it’s a scene that introduces readers to his beforehand-unknown wife, a horned Inhuman named Myrra.

Writer, Al Ewing had hinted that Gorgon was going to be revealed as a widower, but here it is confirmed, with the additional tidbit that she is the mother of both their children (both the older adolescent, Alecto, as well as her younger brother Petras).
This suggests that Myrra died sometime shortly before or right after Attilan’s relocation to the Blue Area of the moon; although the circumstances of her death are left unrevealed.
Within Gorgon trance, Myrra berates him for having forgotten about her, for finding comfort and distraction in his love for another.

The others experience similar hallucinogenic trances, each focused upon feelings of guilt, accusation and betrayal.

Swain sees Panacea, accusing her of wishing for a girlfriend more able to reciprocate her feelings of affection in a traditional fashion.  Flint sees his adoptive parents condemning him for his negligence over never saying that he loved them.  Maximus sees his parents accusing him of his various malicious schemes; stating that it was him not his brother whom they should have been worried over (Max seems utterly unfazed by the matter).  Noh-Varr sees Kate Bishop, haranguing him for having broken her heart.  And Medusa sees Black Bolt who accuses her of betraying him, sending him into the blackness and breaking his heart.

And finally there is Crystal.  She is not effected like the others.  She is left to speak more privately with Ronan.  He accuses her of leaving him, of turning her back on true love. And the issue ends with Ronan demanding to know how she pleads to this accusation.

A very fun issue and truly my only complaint is just how short it was.  Although granted the matter is likely influenced by my near-insatiable hunger to see more of where Ewing and company is going.  Understanding the full context of the story sort of requires one to be fairly well versed on events that occurred in both the Black Vortex cross-over as well as parts of J. Hickman’s run on Fantastic Four.  This was no problem for me, but I can imagine that other readers might have been a bit puzzled over who Ronan is, his connection to the Inhumans and how Hala was destroyed.

Al Ewing is clearly having a lot of fun writing Maximus and it shows.  Max gets all the fun and funniest pieces of dialogue.  This is great, but it does detract a bit from the continued character development of the other players.  I have been hoping that these chapters would more focus on Crystal, who has thus far been the least utilized member of the cast.  Bringing back Noh-Varr’s pocket battlefield was super cool, but there’s no reason why it couldn’t have been Crystal who stepped up and saved the others when The Astern was crashing.  The cover for next issue (wonderfully illustrated by Kris Anka) focuses on Marvel Boy and while it’s a great cover, it leaves me further worried that Crystal will continue to take a back seat int he narrative despite the fact that her past relationship with Ronan should place her front and center in the plot.  I suppose we will have to wait and see how it all pans out.

Silas and Charalampidis do terrific work on the art.  Silas particularly excels at larger scenes, such as Ronan standing before the Royals and his initial attack on The Asterian.  A touch less so in terms of facial expressions and I’m not a huge fan of the use of accentuated shadow covering much of the characters’ faces (particularly their eye-sockets.  My sense is that Ewing wrote this script with Jonboy Meyer’s art style very much in mind and Thony Silas as had to accommodate his own style to fit.  Yet this is totally speculation on my part.

some interesting side notes:

“Don’t talk of dust and roses
Or should we powder our noses?
Don’t live for last year’s capers
Give me steel, give me steel,
Give me pulses unreal.”