You are here: Home / Reviews / The Royals #7 Review (spoilers) 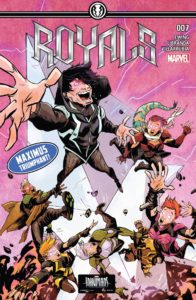 The Royals find themselves embroiled in the deadly Snarkwar and Maximus gets unleashed.  All from the creative team of Al Ewing, Kevin Libranda and Jose Villarrubia.

The Snarks are a warlike alien race who first appeared int he pages of Power Pack.  These half-insect/half-reptilian creatures possess the technology to harvest the special abilities from super powered beings.  Their world is enmeshed in a planet-wide civil war and Prince Hyinar, Snarkworld’s would-be leader has taken to the stars to collect and amass new powers so that he and his forces may return and conquer their world.  Hyena’s forces have already defeated a Kymellian Sorceress, thus gaining the same abilities of the siblings who made up the Power Pack; and now they look to invade NovaHala, whose population is rich with Universal Inhumans possessing all manner of powers for them to plunder.  Last issue saw the Snarks capture Gorgon and kill Kal Blackbane (which is a g0ddam tragedy btw).

Shackled, Gorgon can only growl and spit insults as he is forced to listen to Hyinar monologue his plans to capture the rest oft he Royals and steal their gifts.  Except for Medusa, whom the Snarks see as an invalid due to her sickness and the loss of her Inhuman powers.  Medusa the Snarks simply plan to kill and Gorgon seethe with rage at the thought of it.

Elsewhere, Flint, Crystal and Swain are made comfortable as the guests of the Universal Inhumans.  Flint spares with the Centurian Inhuman known as Metallic Titanwhile Crystal makes small talk with the others.  Swain sits alone, afraid to commingle with others without Maximus there to mute her empathic abilities.  The vision of guilt that Ronan The Accuser had forced Swain to endure has shaken her confidence something terrible.

Dara Ko Eke, the Universal Inhuman of the Badoon, notices how Swain has sequestered herself away from the others.  Dara goes to see what is troubling Swain and at first Swain mistake the gesture as a romantic ovation.  It’s emblematic of just how lost she feels.  She doesn’t trust her own powers and lives in constant fear that she might unwittingly coerce others into feeling what she wants them to feel (either on a conscious or unconscious level).  Panacea, Swain’s girlfriend back on earth, does not feel emotion in the same conventional way and this has made her immune to Swain’s influence.  Yet it is not without its drawbacks and a part of Swain wishes that Pan could reciprocate Swain’s love in a more mainstream/traditional fashion.  The encounter with Ronan has caused Swain to believe that a part of the reason why she accepted this mission tot he stars was to run away from her fears over her relationship with Pan.

Meanwhile, Medusa, Maximus and Noh-Varr confer with the Queens of the Universal Inhumans.  These queens still do not fully trust their former sister-wife, Medusa, blaming her for turning her back on their king, Black Bolt.  Yet thew promise of learning more about the mysterious Sky Spears has superseded their suspicions.  One of these Sky Spears has come to NovaHalla, planting itself in the plains outside the city.  Its mystery continues to bedevil the Universal Inhumans.  One of their psychics had attempted to breach its secrets and it augmented his powers and took over his mind.  It held him, controlling his will to fend off others until he died of starvation.  Now only his skeleton remains behind.

A series of glyphs line the structure of the spheres.  The writing is of a language that none have thus far been able to decipher or translate.  Yet there are a number of specific words that are familiar to the various races that compose the Universal Inhumans.  These are ancient terms from the origins of each species’ languages.   One such term beckons back to the older language of the Badoon and means ‘to look and find through experiment.’  There is another word from ancient Kymellian that means ‘seed’ or possibly ‘fruit.’  Medusa adds that there is also a word on the Spear that is ancient Tilan… a word that translates to ‘genocide.’

With this, Medusa decides that she no longer has the time to play nice with the queens.  She presses a button on the chain that has kept Maximus leashed.  This seems to disengage a power dampener, offering Maximus full control over his psychic abilities.

Maximus seizes the opportunity and exerts his will over the gathered Universal Inhumans.  At first he is unsure as to why Medusa has freed him, but it quickly becomes evident that their goals are aligned and Medusa can trust Maximus as long as they both want the same thing… namely, to decode the mystery of the Sky Spears and their connection to the Progenitors.

While Maximus is indeed willing to do Medusa’s bidding, it doesn’t mean he is going to be nice about it.  He chooses to conduct a cruel experiment to further examine the parameters of the Sky Spear.

Borrowing the telekinetic abilities of the Centurion queen, Oola, Maximus seizes Noh-Varr in a vice-like telekinetic grip.  Maximus notes that the sky spears have all been sent to places where there are Inhumans.  Plus they have recently learned that The Inhumans and The Kree share a commonality in that both races were artificially evolved by way of derivatives of Primagen.  Therefore, The Kree are also Inhuman of a kind.  Maximus tests this theory by throwing Noh-Varr against the spear.   Upon striking it, Noh-Varr’s body crackles with energy and he is riddles with agony… it would appear that Maximus’ hypothesis is correct.  Intriguing as it may be, Medusa is unamused by Maximus’ actions and it remains unclear if Noh-Varr has even survived.

The seven switches back to the amphitheater where the other members of the team are waiting.  Crystal has grown concerned over Gorgon’s prolonged absence.  Before she can investigate the matter, however, they are attacked by the Snarks and both the Royals and the members of the Light Brigade are quickly defeated and captured.

They awaken imprisoned within crystal-like cells.  These crystals appear to have to do with the Snarks’ technology to steal superpowers.  They are like batteries in which the original hosts must be kept alive so that the various Snarks who wild the powers can periodically return to recharge.  This is all explained by Gorgon whose power has been taken from him.  It has left Gorgon devolved into a more human-like state, his goat-like legs replaced with regular human legs.

And it is on this cliffhanger that the issue comes to an end.

This issue was much more build up than I had expected it to be.  I’m so curious to learn the secrets of the Sky Spears that I found myself a bit irritated by meddling actions of the Snarks.  Plus the Royals and their comrades fell so quickly to the Snarks attack, it didn’t offer illustrator, Kevin Libranda a lot of space to show off his skills for depicting action.  Still, what the issue lacked in action it made up for in some pretty good character development, specifically for the two newest Inhumans, Swain and Flint.

Swain’s situation is particularly intriguing and I’m very much enjoying the places Ewing’s script is going with her.  The story with Flint is still just getting started, but it’s interesting nonetheless.  Flint is pretty lost and looking for a place where he feels that he belongs.  He lost his adopted parents and his biological family was not what he had hoped for.  He had found something of a new family among the Inhumans, but it’s possible that the events of IvX has shaken his belief.  It would seem Flint has joined The Royals on this mission for reasons of his own, a hope to possibly find the sense of be longing that has so far evaded him.  I’m very much looking forward to seeing where this leads.

There continue to be more questions than answers when it comes to The Sky Spears.  The mystery of it has been percolating ever since the Free Comic Book Day issue of Uncanny Inhumans.  Based on The Ultimates2, Ewing is not shy about going big in providing a resolution to long-building mysteries and I’m quite excited to learn whatever answers are providing in issue number nine.  Unfortunately, it also leaves me a bit impatient.  I sort of want all this Snarkwar business to hurry up and get out of the way so we can get to finding out more about The Progenitors.

Libranda’s illustration and Jose Villarrubia’s colors continue to be a great match for the tenor of the story.  The art is asked to juggle a rather large number of characters and it manages it quite nicely, composing it all in a fashion that makes it come across as smooth, detailed while not overly-busy.

All and all another fun issue. I might feel a bit impatient over wanting the plot to move forward, but focusing on character development is likely a wise decision.  The narrative has been so large in scope that it can inadvertently dwarf the characters so slowing down to more intently focus on the players is understandable move.

Definitely recommended.  Three and half out of five Lockjaws.