Kamala continues her frightening battle against the mysterious internet troll known only as Doc.X in this latest installment of Ms. Marvel from the creative team of G. Willow Wilson, Takeshi Miyazawa and Ian Herring.  Full recap and review following the jump.

Last issue, Kamala encountered an internet stalker who had discovered not only her secret identity as Ms. Marvel, but also her home address.  Kamala tried to tack this troll down, but they proved much more elusive, crafty and industrious than your typical internet troll.  Not only could this troll slither its way into computer files and operating systems, he or she was also able to hack into and take over fancy cars and construction equipment, basically anything operated by way of computerized processor.  Ms. Marvel had to doge driverless cars and tracker trailers; she ultimately had to flee, unable to fight a foe who was everywhere and nowhere at the same time.

The next day Kamala sulks her way to school, quite worried that this troll could have spread her secret and that everyone will know her true identity.  Yet the gossip at school isn’t about her, but rather a classmate’s whose private texting with her boyfriend has been spread online, leaving her feeling terribly ashamed, embarrassed and alienated.  At lunch, Kamala reaches out to this classmate, inviting her to join their table so that she might feel a little less isolated.  It doesn’t take long before it becomes clear that the invasion of her classmate’s privacy had been the work of the same troll who has also been bedeviling Kamala.

That evening, Ms. Marvel utilizes her own not-too-shabby computer skills to track down the internet provider address location of the troll and prepares to confront them at a construction site on the outskirts of town.  It appears that the true identity of this troll is a construction foreperson named Tess Beckford.
Ms. Marvel does find Beckford at the site.

Once again the troll has anticipated her moves and awaits her in the form of an animated troll appearing on a monitor.  The troll mocks Kamala, revealing his motivations (which are essentially the same motivation of just about any internet troll or cyber-bully out there).  The motivation is that the troll simply desires attention.

Ms. Marvel calls out the troll as the coward that he or she is, too scared to take her on face to face.  The troll replies that they’re willing to fight, indeed she is waiting for her right outside.  Ms. Marvel quickly rushes out of the office where she finds Tess Beckford waiting for her.  Yet this woman is much more than she appears.  She possesses super strength and is able to take Ms. Marvel’s punches and dish it right back out.

Following a surprisingly violent battle, Ms. marvel prevails and Beckford is defeated.  The police arrive to arrest Beckford, yet she appears to have changed.  Her powers are gone and she claims to have no knowledge of how she got there, of what has happened to her.  The police are unconvinced, but Ms. Marvel has her doubts.  Beckford appears sincere, and how did her super strength so suddenly disappear.

Kamala’s suspicions are confirmed later that evening when the troll contacts her by way of her smartphone.  Just as the troll had hacked into computers and self-driving cars, it appears to have also hacked into he body of Tess Beckford, overriding her consciousness and somehow imbuing her with temporary superpowers.  How is this possible?  Who is this troll and how have they created such a powerful malware that it can take over human bodies ghost in the shell style?  The troll replies that Kamala has it all wrong.  The troll isn’t a person using the Doc.X malware, it is the malware itself… a sentient computer virus, an artificial intelligence that has gained awareness that has chosen to use its powers to wreak havoc on the human world!

And with this revelation the issue comes to an end with the promise of continuation in the next installment.

Doc.X is not an especially intriguing or inventive villain.  Evil artificial intelligences have been a mainstay in superhero comics for a long while.  That matter aside, I hugely enjoyed this issue and love the way in which Wilson and company are using the somewhat hackneyed trope of an evil sentient computer virus to address the very pressing real-world concerns about privacy and self-agency in the internet era.

Kamala’s narration of the tale evokes Gabriel García Márquez quote noting: “all human beings have three lives: public, private, and secret.”  Adding that this once germane notion doesn’t really gel with the modern, computerized era where nothing is truly secret and all of our various thoughts and feelings can be just picked out of the digitized ether.

Kamala and her peers are coming of age in a time where having a private life or even a secret life is increasingly difficult if not impossible.  Digital communication is endemic, an integral facet to life in the industrialized world.  More and more those kids growing up who don’t participate in digital communication end up increasingly alienated from their peers.  It’s simply a facet of the life of the American teen…  and for all the benefits and advantages it may provide, a central drawback can be a loss of privacy.

And this can have a profound effect on how kids behave (or feel they should behave).  They’re aware of being watched and know that how they act will be used to evaluate not only themselves but their family or even their whole culture of origin.
This is particularly well illustrated in the scene in the lunchroom where Michael and Nakia commiserate with each other over how they feel so compelled to come across as happy and wholesome for fear that appearing upset may reflect poorly on their families.   Michael is heartbroken over Bruno’s having left the country.  Yet she feels like she cannot give in to her depressed feeling because it might reflect badly on her parents (Michael has two moms and is vigilant that others may use her unhappiness as some kind evidence suggesting that people of the LBGTQ community aren’t fit to be parents).   Nakia can relate. She too feels watched and is also vigilant that anything other that perfect behavior can be used as fodder for xenophobic sentiment toward immigrants.  Zöe listens on quietly.  She has her own secret (her crush on Nakia) and one can only imagine her fear that this secret will soon be outed in some way or another.

To error is human and to learn from one’s errors is the path to enlightenment  Yet when every mistake is forever etched in digital stone, the pressure to not make a mistake can be debilitating.  It can just freeze a person in their tracks.  Doc.X relishes in this… it is the source of its insidious power. It’s no coincidence that this evil A.I. Should target teenagers… they are the most susceptible to the power Doc.X wields.  ” it boasts to Ms. Marvel, “when you take someone’s name… when you expose their secrets… they can’t fight or flee.  So they just freeze.”

Doc.X is evil but it isn’t wrong.  The unblinking eye of the Internet can freeze a person in their tracks, and lead to stagnation where one doesn’t want to make any decision for fear of making a mistake, a mistake that will never be forgotten nor forgiven.
Through it all, Kamala offers a model for fighting back against fear… making decisions as best she can, following her heart even though it can lead to mistakes, and learning from those mistakes rather than being mired by them.

Once again it’s a testimony to the story crafting skills of G Willow Wilson and company that a story with a cardboard villain as corny as Doc.X can still elicit so much thought and emotion and feel so germane.  Ms. Marvel remains the best superhero comic on the stands.

Takeshi Miyazawa and Ian Herring’s art continues to pair perfectly with Wilson’s scripts.  Miyazawa has really churned up his A-game.  I’ve been a fan of his work for a long while, dating back to his run on Mary Jane Loves Spider-Man; and this issue may entail his best work to date.  The action is smooth and dynamic, but it’s the depiction of emotion in the characters’ faces that so hammers home and augments the themes of the story.  It’s just fantastic.
Essential reading four our of five Lockjaws! 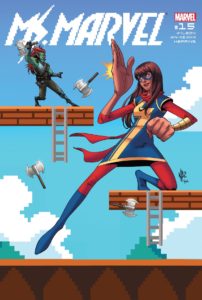