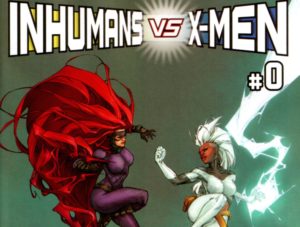 The stage gets set for the big battle in this preamble to the cross-over event from writer, Charles Soule, with art by Kenneth Rocafort, and colors by Dan Brown.

The narrative skips through a series of events that have occurred in the recent past, all the various factors, schemes, and follies that will ultimately culminate in a full scale war between The Inhumans and The Mutants.

What we know off the bat is that The Terrigen Cloud, the last source of Terrigen on Earth and lifeblood of the Inhumans, has proven deadly to Mutants.  Upon discovering this, Cyclops and Emma Frost led a team of X-Men to take out the threat.  They succeeded in destroying one of the two Terrigen Clouds, yet the victory came at the cost of Cyclops’ life.
IvX #0 occurs shortly thereafter.  Hank McCoy, the Mutant known as The Beast, has come to New Attilan to utilize their resources in order to develop a cure to Terrigen poisoning in Mutants.  To this end, Beast takes on Iso as a lab assistant and, at first, he is quite optimistic over their prospects of ascertaining a viable cure.

Elsewhere, Emma Frost is honing her skills and preparing herself for bringing to an end what she and Cyclops had started… namely, destroying the second Terrigen Cloud.   More than that, Emma is out avenge Cyclops’ death by killing Black Bolt and Medusa.   Emma assertion that Black Bolt murdered Cyclops is confusing to her pupils, The Midwhich Cuckoos.  These three psychics know the truth, that Cyclops had actually died from Terrigen poisoning, and it was merely the visage of Cyclops who fought and died at the hands of Black Bolt… a mental projection that Emma had manifested with her powers.  All this has remained a secret and Emma aims to keep it that way.  As far as the world knows, Cyclops was killed by Black Bolt… as for who exactly was filming that whole ordeal is another mystery :3

The narrative shifts forward several weeks and The Beast has not made a whole lot of progress in coming up with a cure.  He has, however, outfitted the RIV with a Cerebro device that will allow it to track Mutants who are in the path of the Terrigen Cloud.  Here we get to see Iso reunited with her former teammates, Flint and Grid.  Both are still a bit shook up by their earlier encounter with The X-Men.  Flint makes an offhand comment about Mutants that seems quite unlike him.  ‘Maybe the Terrigen cloud is a problem for Mutants,’ he says, ‘I’m not sure it’s that much of a problem for us.’

A very callous and out-of-character statement for Flint… although it’s important to keep in mind that this tale is occurring before the events of All New Inhumans #’s 8-10 where Flint met his birth-family – Inhumans who could be severely harmed by exposure to The Terrigen Cloud.  It seems that Flint has done a lot of growing up between the time of this story and the current timeline.

Alarm bells are raised aboard the RIV.  The Cerebro unit has detected a Mutant in the path of the Terrigen Cloud.  Crystal and her team mobilize to save this Mutant and The Beast is quite pleased to see Inhumans acting in the service of saving Mutants.

The narrative switches again and Emma is meeting with Magneto and his current team of Uncanny X-Men.  Emma attempts to recruit Magneto and his forces to her efforts to destroy the cloud and bring down the Inhumans.  Magneto is surprisingly trepidatious over the prospect of facing off against The Inhumans.   Magneto doesn’t see Crystal’s mission aboard the RIV as some altruistic act of good faith; rather he sees it as her guarding the Terrigen Cloud against the X-Men.

Furthermore, Magneto appears concerned that the combined forces of The X-Men may not be able to prevail win a full-fledged war against The Inhumans.  Emma does not share this grim outlook; with the right strategy and forces, she remains confident the Inhumans could be defeated.

Yet another jump in the narration finds The Beats and Iso collecting samples in The Savage Land.  The Beast is growing more and more pessimistic as this cure has proven much more elusive than he had originally anticipated.

Another jump still sees Emma touching base with the All New X-Men team, the time-displaced versions of the original five X-Men.  Emma does not outright recruit them to her cause, but rather sews the seeds of their being at her aide when she needs them.  Herein we also get to see a bit of Emma’s softer side, the emotional undercurrents that are motivating her actions.  It’s all but heart-wrenching for her to see the younger version of Cyclops, reminding her of the love she had lost and steeling her resolve to move forward in her schemes.

Meanwhile, on New Attilan, The Beast has become distraught in his lack of progress.  Terrigen toxicity in Mutants is not one disease, it is thousands of diseases, a new manifestation unique to each Mutant host.  It’s a terrible setback, yet Queen Medusa is not going to allow Beast to wallow in his despair.   She presses him to continue on; she has put her faith in him and he his faith in science, and he must prevail.

The narrative switches once again to find Emma Frost sipping Champaign in a suite at The Hellfire Club.  Her companion is left unseen but together the two are hatching plans within plans to forward Emma’s agenda.  Who exactly Emma is speaking with is left up to speculation.  Possible guesses might include Mystique, Lady Mastermind, or possibly even Madelyne Pryor.  Time will tell.

Back on New Attilan, The Beast is breaking under the strain.  He has not been able to find a cure and the Terrigen in the atmosphere is quickly bonding with nitrogen molecules.  Soon the earth will be completely uninhabitable for Mutants and there doesn’t appear to be a solution.

The issue concludes with Emma approaching Storm and her Extraordinary X-Men team.  Beast has not reported positive results and Emma encourages Storm that it is time to take on a more proactive approach.  Storm is not ready to throw in with Emma, not ready to give up on a mutually beneficial answer.  But she might be forced to act, forced to go to war alongside Emma as every other avenue is rapidly closing off.   And it is here that the issue ends.

Akin to most ‘zero’ issues, this comic is a bit perfunctory and not entirely necessary to the eventual plot of IvX.  It’s very much just a set up where the stakes are established, the sides drawn, and plot-holes are shored up.  Still, the dialogue is mostly sharp and the art is pretty terrific.

I imagine that many fans might be disappointed to see Emma Frost portrayed as the ‘villain’ of the issue, and possibly the event as a whole, but the role suites her just perfectly.  Emma does manipulating and conniving so well, she wears it like a beautiful gown exquisitely tailored.  Forcing her into the confines of ‘hero’ is a waste and Emma could very well prove a truly wonderful counter-foil to Maximus when he inevitably shows up down the line.

And kudos to Charles Soule for actually making The Beast come off as likable.  I felt pretty bad for ol’ Hank as his optimism slowly faded and it dawned on him that a cure may be very well out of his grasp.  The assassination of Hank McCoy’s character has transpired over a decade in countless books by numerous authors.  It’s unlikely that he could achieve true redemption in just one event, but Soule is giving me hope that it is at least possible.

There’s not much to say about the rest of the characters in that this book was mostly about Emma and The Beast with everyone else mostly window dressing saddled with wooden and out-of-character lines.  Although Kenneth Rocafort illustrates them wonderfully; especially Iso.

All in all, this zero issue is not an absolute must, but does do a good job of setting he table for the oncoming feast.  The fantastic art and shining moments for both The Beast and Emma Frost makes it worth picking up.
Not essential, but fun nonetheless.  Recommended for Inhuman/X-Men completists.  Two out of Five Lockjaws.