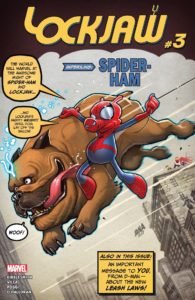 Lockjaw and D-Man’s adventures continue and we learn the source of the mysterious signal that has set this all in motion in this third in a four issue series from the creative team of Daniel Kibbelsmith, Carlos Villa, Roberto Poggi and Chris O’Halloran.

The story so far has seen Lockjaw stirred by a mysterious signal that alerted him to the fact that his siblings may be in trouble.  He teleported into action, checking in on his brothers and sisters to make sure they were okay.  First he traveled to Brooklyn to see Bixby, a long-lived bulldog cared for by a kooky old woman.  And it just so turned out that this woman is the neighbor of the retired super hero and one-time Avenger known as D-Man.

D-Man had lost his super powers some time ago and it has left him adrift, feeling depressed and purposeless… trying to find some new sense of meaning in life.  Yet being a hero is in his nature and, powers or not, D-Man jumped into action and assisted Lockjaw when a swarm of hamster-piloted flying saucers attacked.

Together, Lockjaw and D-Man were able to fend off these hamsters and, once Lockjaw was sure Bixby was safe, he teleported off to his next sibling.  D-Man accidentally tagged along and the two had another adventure in the prehistoric Savage Land.  There they encountered Ka-Zar and Zabu and battled a pack of giant wolves.  The fight was cut short, however, when it was revealed the pack was lead by ‘The Great Beast’ whom it just so turned out is Lockjaw’s sister.
The Beast herself had been also attacked by hamster in flying saucers yet she and her pack where able to defeat them without aid.  Seeing his sister was doing fine and needed to protection, Lockjaw teleported off taking a very confused D-Man with him.

This most recent teleportation was a much more significant jump… Lockjaw transported to an entirely new dimension.  This is Earth 8311, the anthropomorphic universe populated be cartoon animal versions of the various heroes and villains of the Marvel 616 Universe.

D-Man had no idea such a dimension existed and is quite confused by it.  He has little time to bend his mind around the matter before he and Lockjaw are attacked by The Wisker and his Wrecking Zoo (an anthropomorphic version of The Wrecker and the Wrecking Crew).  Fortunately, the Spectacular Spider-Ham swings in to lend a hand and the villains are defeated.

Teleporting to a whole new dimension has taken a lot out of Lockjaw and Spider-Ham leads them to a safe location and it is here that they meet Lockjaw’s other sister, Doc Jaw.  This sibling had been brought tot he 8311 Universe when she was just a puppy and the anthropomorphic filed surrounding he world impacted her development, changing her into an anthropomorphized version of herself.  She was discovered by Mooseter Fantastic, who took her in.  Under Mooseter Fantastic’s tutelage, Doc Jaw would gone on to become a great scientist.

Here’s the deal…  Some thirty years back Lockaw’s mother was a regular dog who was experimented on by an unscrupulous Inhuman scientist (has there ever been an Inhuman scientist who wasn’t unscrupulous?).  Lockjaw’s mom was exposed to a version of the mutagenic Terrigen Mist whist she was pregnant and she gave birth to a litter of puppies, each of whom had been altered by the mists.  The most powerful of the puppies was Lockjaw, who was imbued with enhanced size and strength, cosmic awareness and the ability to teleport himself and others through dimensional portals.  Lockjaw was gifted to the infant prince, Black Bolt, and would go on to be an important member of the Inhuman Royal Family.

Some time thereafter, Lockjaw used his newfound powers for teleportation to transport each of his siblings to new homes.  Bixby was transported to Brooklyn, The Beast to The Savage Land; Doc Jaw was teleported to Earth 8311… and so on.

Although Lockjaw’s intentions were good, he was just a puppy and, well, a dog.  And in his efforts to transport his siblings to safe places, he accidentally happened upon The Negative Zone.  This is a violent realm lorded over by the powerful Annihilus.

Annihilus is a terrible being whose only aim is to destroy everything possible and he has been bent over trying to find access to the multiverse so to spread his nihilistic right of terror and destruction.  This being sensed Lockjaw stumbling into the Negative Zone. He sought out the sibling Lockjaw had left there (a brother) and captured him.

Again, Annihilus is intent on accessing the multiverse so to spread his terror.  Yet he can only create small, temporary portal to access it.   His plan, it would seem, is to seek out Lockjaw and use his genetic material to obtain the ability to teleport between dimensions.  To this end, Annihilus has sent out hi minions to capture Lockjaw’s sibling, hoping to lure out Lockjaw and capture him.
With her enhanced intellect, Doc Jaw was able to discern Annihilus’ scheme and she sent out a beacon to him hoping that she could get to Lockjaw first and warn him of Annihilus’s plan.

If ll of this wasn’t complicated enough, there is the additional wrinkle that Lockjaw no longer remembers how to teleport to the Negative Zone.  He had made the trip once before, but it was by accident when he was just a puppy.  He needs to somehow remember how to make the jump to The Negative Zone so that he can rescue his brother and put an end to Annihilus’s scheme.  In order to access this memory, Doc Jaw has created a machine that will allow D-Man to enter into his unconscious dream-scape where hopefully the hidden memory might be found.  Or something like that.  It’s a bit confusing.

In any case, D-Man is rather reluctant to travel into Lockjaw’s dreams.  Doc Jaw convinces him it is a challenge he must step up to.  Fate has put him and Lockjaw together.  She can sense D-Man’s heroic nature and appeals to his sense of needing to do the right thing.  D-Man ultimately concedes and agrees to put on the apparatus that links his and Lockjaw’s minds.

Sleep is induced and D-Man and Lockjaw find themselves wondering through the dreamscape.   There the two are attacked by nightmare entities drawn from each of their unconsciouses.  These nightmare creatures are destroyed by the timely arrival of a new ally, the mysterious being known as Sleepwalker.  And it is here that the issue confused with the promise of continuation in the next issue.

Oh kay…  A rather wacky issue with a complicated plot, but still a lot of fun.  The Marvel Anthropomorphic Universe is a pretty silly place, with cartoon animal analogs of familiar characters each offered their own pun-based animal names (some better than others. Thunderb -owl?).

It was kind of tough bending my head around Doc Jaw’s exposition of the plot points.  I’m still not sure I have everything figured out… are the hamsters in flying saucers Annihilus’s agents?  Still, I suppose some degree of confusion is to be expected when you get an information dump from a talking dog.   And I can certainly relate to D-Man’s feelings of befuddlement.

In that the two previous issues were a good deal lighter on plot, it offered up more room for exploration of D-Man’s character.  Conversely, this issue was much heavier on plot and, as such, D-Man didn’t receive as much character development.

Sleepwalker showing up at the end was surprising.  He’s a character I know very little about… although he certainly fits right in alongside D-Man, Ka-Zar and Spider-Ham.  I’m loving how Mr. Kibblesmith is drawing from such random corners of the extended Marvel Universe.

I’ve know idea how this nutty story is going to wrap up nor how it is all going to conclude in just one last issue.  But I sure am looking forward to finding out.
The art by Villa, Poggi and O’Halloran is once again terrific.  It fits perfectly with the tenor of the tale and I especially liked the way the over arching style has shifted from one bizarre location to another.