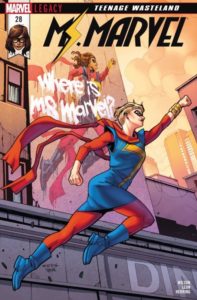 The Teenage Wasteland story-arc comes to its thrilling conclusion as Captain Marvel and the daring Kamala Korps fill in for the missing Ms. Marvel to battle the tyrannical Inventor and his horde of bionic monsters.  All from the creative team of G. Willow Wilson, Nico Leon and Ian Herring.

The villainous Inventor has enacted his final gamut, triggering the release of a variable army of monstrous cyborgs and giant mutated reptiles with bionic appendages… and it looks as though Jersey City will be destroyed unless our heroes can prevail.

Captain Marvel has faced such terrors before and is more than willing to jump into the fray with reckless abandon, yet feels that all this might be too much for the merry band of Ms. Marvel’s friends and fans.  Not that they’re going to stand for being left behind.  They’re in it ‘till the end… besides, they already have the proper outfits.

…and a tremendous battle ensues.

Elsewhere, Kamala’s pal, Neftali, has come to the end of his investigation over the whereabouts of his missing friend.  Following the clues, Neftali has tracked her down to the gated ‘Over-Lee Private School,’ a fancy prep school where students wear uniforms and the biggest threat is being iced out from a clique.

Neftali is able to get Kamala’s attention and the two speak.  What is she doing here, he asks.  Kamala responds that she needed a break from all the drama; needed a place where she could just blend in and assimilate and not have to deal with the constant demands of being different, smart, Muslim, and all of the things that make her special and herself.  Her uniqueness has felt a huge burden and one she’s felt she’s had to bear all on her own.

Neftali isn’t buying it.  As he sees it, Kamala doesn’t need to deal with this all on her own; she has only done so because she has been too proud or myopic to actually ask her friends for support.  She has friends, people who love her and they are there to help her.  She doesn’t need to run away, doesn’t need to assimilate and pretend to be something she is not…  she simply needs to rely on the people up the support she so needs.

The scene ends here and it remains to be seen whether or not Neftali’s words will truly resonate with Kamala.

Back in the city square the battle rages on.  Captain Marvel is able to best many of the Inventor’s beasts, but their numbers seem endless and they keep on coming.  Mike, Gabe, Zoe and Nakia hold their own, but they too to quickly getting overwhelmed.  Even the otherwise competent Red Dagger is out of his depths.  He’s used to the petty thieves from the back allies of Karachi, giant cyborg lizards are a good deal over his head.

In the midst of all this, The Inventor offers up a garden variety villain’s monologue.  As he sees it, some lives are more important than others.  Only those who contribute to society in a manner tat he sees fit should be allowed to live and all others should be subjugated and utilized for energy.

The Inventor feels he is owed thanks.  The world is suffering from both overpopulation and an energy shortage and he has the solution to both problems.  The only catch is that he gets to decide who is and who is not of merit…  who benefits and who should be ground down as energy.

Things aren’t looking so good.  The Kamala Korps are spent and Captain Marvel is becoming overwhelmed.  The Inventor releases his largest monster yet and things are looking rather grim.  Out heroes are in desperate need for reinforcement.

Which they get when the real Ms. Marvel shows up on the scene.  Using her embigoning powers (it’s a real word now) she takes on the giant lizard and wrestles it to the ground.

Seeing that the tide has turned against his favor, The Inventor employs his last resort – initiating an electrical surge that fries the various circuits in his army of cyborg monsters.  The monsters are destroyed, but Ms. Marvel is caught in the massive surge of electricity.  Electrical based attacks have remained one of Kamala’s greatest weaknesses and she is knocked cold by the surge.

The monsters having been taken out, The Kamala Korps have little difficulty apprehending The Inventor and Captain marvel goes to tend to the injured Ms. Marvel.  Channel wakes up in her former friend’s arms and is surprised to see her.  After all that had happened during the Civil War II debacle, Kamala thought Carol no longer liked nor cared for her.

Carol tells her not to be silly.  They may have disagreed, but they will always be friends.  The threat is passed and now it is up to Kamala to decide what sort of future does she want.  She can be a hero if she so chooses, but it s her choice… great power, great responsibility, et cetera…

Captain Marvel carts The Inventor off to the prison cells of New Attilan and the laborious task of cleaning up begins.

The next day at school, Kamla’s pals are happy to see that their friend has returned.  It’s a happy reunion and the whole ordeal has helped Kamala to realize that she was never as alone and on her own as she had once believed.  All she needed to do with look around to see that she has good friends, they have her back, and with their support she is free to be exactly who she is.  And here the tale comes to its end.

What can I say, another great Ms. Marvel adventure.  And I was quite surprised about how the actual thematic snuck in at the end, hitting with greater poignancy in that it so snuck up on me.

Kamala didn’t run away because she needed a break, because the life of a hero was proving too much for her.  Rather she was drained by the constant pressure to fit in… the seemingly unending arduousness of being different.

People who come to America from other countries, and the children of those people, are constantly assailed by the pressure to assimilate… to become some prefabricated version of what an American is.

Of course what an American truly is defies definition, there is no set parameter… but there nonetheless persists this undercurrent that assimilating into American society entails adopting white, Christian, patriarchal and heterosexual values.   An American can be brown or Muslim or have different ideas about what is right and what is wrong… but only if they’re quiet about it, keep it to themselves, and don’t rock the boat.  This is the base root of cultural assimilation.

The Inventor acts the role of the bellowing demagogue, belching out the virtues of homogeny.  Only those who fit in, who contribute in ways deemed suitable are viewed as being of value.  He’s the arbiter of so-called ‘merit based immigration.’  The idea that to become an America one must toe the line and adhere to a standardized set of values.  If you can contribute as a doctor or mechanic or computer technician then welcome aboard.  If however you want to be an artist or cook or don’t yet know what you want to be, then you’re little more than chaff.  No need to apply.  The Inventor takes it a step further suggesting that these meritless layabout are best used as batteries to provide much needed energy to those who deserve better.

Kamala has always been true to her uniqueness.  She has idiosyncratic tastes; she likes wearing fun clothes and silly hats.  She has nutty adventures.  She is true to her Muslim faith yet also questions the chauvinistic aspects of the old ways.  She’s an Inhuman, a fanfic maven, an unabashed member of the Carol Corps.  Her friends are Black people and Jews and nerds and gays and lesbians… she is rocking the boat big time.

And sometimes, being true to yourself is exhausting.  It can be tempting to just fade into the background, assimilate, not stick out and just relax.
Kamala’s short tenure at the Over-Lee Private school offered her just such a respite.  There’s standardized uniforms, standardized values, and big protective walls that shelter students from the real world so that they can be molded into standardized non-boat-rocking cogs.

Thankfully Neftali (a wonderful new addition to the Ms. Marvel extended cast) is able to seek Kamala out and talk some sense into her.  Neftali is a kindred soul… he basically looks like an extra from Westside Story fashioned with a sporty kippah.  Like Kamala he has had to struggle to maintain his uniqueness, to be true to himself and not assimilate into the vacuum of central tendency.  And he’s been able to do so in part by way of his friendship with Kamala.  He supports her, she supports him and their mutual support protects them from a world that is rarely excepting of difference.  He reminds Kamala that she has lots of friends, a whole bevy of weirdos and freaks who have got her back.  She doesn’t have to endure her individuality on her own… she can rely on her friends just as much as they rely on her.

Great fun, an important and timely message and definitely recommended.  Four out of five Lockjaws.