You are here: Home / Reviews / The Royals #9 Review (spoilers) 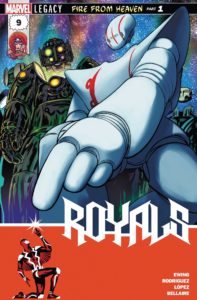 Artist, Javier Rodriguez, and colorist, Jordie Belleaire, join Al Ewing for the beginning of a new arc in the pages of The Royals, one that will see out heroes go up against the godly powers of the mysterious Progenitors.  Quick recap/review following the jump.

As has been he case for the previous issues of The Royals, the story beings with a prologue set some five thousand years int he future.  An aged Maximus, the Lat Inhumans, travels with Noh-Varr The Accuser to the post-apocalyptic ruins of Manhattan, where a crystalline Sky Spear remains inert amidst the crumbling and dilapidated building of the once-bustling city.  The dialogue between the two is as quixotic as ever.  Us readers remain uncertain as to what these two are talking about.  What can be discerned is that The terrible Progenitors are returning and Maximus and Noh-Varr are intent on some sort of last ditch effort to save what is left of the earth.
Within the superstructure of the Sky Spear is what appears to be a human skeleton.  Maximus refers to it as the Uni-King, hoping that it will arise… that perhaps it will prove their salvation against the Progenitors.  It’s all quite mysterious.

The scene switches back to the present where we find Flint in his stateroom aboard the spacecraft Asterion.  In the previous issue, Flint had laid hands on the Sky Spear planted on the outskirts of NovaHala.  Touching the spear had imbued Flint with the augmented powers needed to defeat the Snarks, but it would seem that the action was not without its aftereffects.  There’s an odd glow in his eyes, the robotic words of the spear continue to rattle through his mind.  Then Flint is shocked to find that his right hand has somehow transformed, made into a crystalized substance through which the skeletal bones of his hands can be seen.  Poor Flint, he’s horrified.

Elsewhere on the ship, Medusa and Gorgon have pillow talk after the two had consummated their new relationship with one another (gross!).  Medusa is in rather bad shape.  The mysterious illness she is suffering from has continued to ravage her.  What is left of her once-bountiful hair has gone gray and she coughs up blood into the sink.  Gorgon is unfazed.  Although laid low by this sickness, to him Medusa is still the vibrant woman he has loved from afar for a long while now.   Somehow, the crew of The Asterion has learned of Black Bolt’s escape from the space prison (as detailed in Black Bolt #6).  Medusa and Gorgon wonder allowed what this may mean for them.  Will Medusa be compelled to return to the side of her one-time king?

Medusa explains tha the spark between her and her ex-husband has long since gone out.  She had felt obligated to stand at Black Bolt’s side during The Inhumans; darkest hours in hope that the sight of it might imbue their people with a sense of strength.  Yet, she is no longer queen and no longer feels the obligation to put her needs second in the service of duty to their people.

On the bridge, Crystal and Maximus attempt to make sense of this sudden pairing between Medusa and Gorgon.  At first Crystal imagines that it all may be the product of Maximus’ trickery for mental manipulation.  Max assures her this cannot be the case; Swain’s presence acts to cancel out his powers as his does hers.  And for once Max says something entirely plausible, even mature: Medusa and Gorgon are both consenting adults; why should there be anything wrong with their seeking comfort in each other’s arms?

Besides, Maximus has grander matters filling his head.  The space ship is following the trajectory of the Sky Spear, tracking the spear to its source where they will find the mysterious Progenitors, the makers of the Prima Materia!
Maximus waxes on over what it must have been like for the astral gifs to come across a prehistoric Hala and transform its savage populace into The Kree People.  The visuals that go along with Maximus’ words offer up an interesting visage… a turning of the tables wherein the Progenitors capture and experiment upon Kree savages in the same fashion that the Kree had done on earth when they created the Inhumans.

The substances that The Progenitors use to mutate the Kree cavemen is the Primagen, the true goal of the Royals’ quest.  With this substance they can offer the Inhumans of earth a new lease on their collected future.  Exactly how the team is planning on accomplishing such a goal, however, remains a mystery.
Swain chimes in with concerns about the matter.  Her thought are for Medusa who appears to be suffering from an illness derived from the Terrigen.  According to Noh-Varr’s postulations, Medusa is suffering from a poetic revenge the Terrigen has cursed her with.  If this is indeed the case, and the primagen represents a more pure and powerful version of the Terrigen, might this further hasten Medusa’s illness?

There isn’t time to debate the matter, Flint comes rushing onto the bridge.  He ignores the other’s concerns over what has happened to his hand and shouts that they have arrived.  Some sot of giant cloaking shield dissipates before the ship, revealing the awesome sight of the Progenitor’s home: The World Farm.  I’m not even going to attempt to describe what it is they see…  it looks like this:

On this strange world, a harvester-class Progenitor picks fruit from an alien tree, studying the results and finding that the bizarre fruit as bore a crystal… a shard of unknown properties that the Progenitor refers to as ‘the quintessence.’

The being senses the approach of the Asterion spacecraft and appraises it as a threat.  The being makes a motion with his hand and the spaceship explodes in fireball, apparently killing the entire Royals team on board.
and it is with this shocking cliffhanger that the issue comes to an end.

There’s a lot to unpack here.  I’m just going to skip my embittered feelings over Medusa and Gorgon being together since the matter has already been addressed in a dozen ‘asks.’  In short, I’m not a fan of the pairing and sad to see my hopes of Medusa and Black Bolt reuniting so dashed.  ‘nuff said…

Us readers and fans have known from the start that a crew of seven Royals would venture out on this mission, but only six would return.  The specter of one of the character’s dying has been along fro the ride since the first issue.  I had previously expected the character destined to perish to be Gorgon, but now I’ve changed my mind and my worry is fully focused on Flint.
The juxtaposition between Maximus and Noh-Varr  looking up at this mysterious crystalline Uni-King and the way the scene so quickly switched to Flint has me feeling that Flint is to be the one who is ultimately transformed into this Uni-King… a suspicion that was further augmented when his he discovered his hand had taken on the same bone-inside-of-crystal properties.  In short, I’m quite worried for Flint and the prospect of his making some heroic sacrifice to save the day is feelings like an increasingly viable prospect.

Javier Rodriguez’s illustration is just tremendous, made all the more vibrant by Jordie Belleaire’s masterful coloring.  Rodriguez maintains his own unique style while at the same time letting his inner Jack Kirby run wild for the scenes with the Progenitors.  Words fail me in trying to describe it.  It’s just super cool.

This issue was notably short, with a number of added on pages in the back that act as a refresher course of who the inhumans are and how The Royals ended up on his mission.  That bonus is likely helpful for new readers checking out The Royals for the first time.  For me, however, it was a bit disappointing in that I’m so eager to learn more about the Progenitors and see our heroes engage in this incurably strange, incredibly cool world.

I definitely got a bit impatient with Medusa and Gorgon’s prolonged pillow talk, as well as annoyed with the perfunctory recap-oriented bonus pages.  Yet this is only because I’m so enthralled by where the main story is going.   Only because I just need to know what is going to happen to Flint; why Noh-Varr refers to the World-Farm as ‘home;’ what’s Maximus’ ulterior motives are; whether or not Medusa is going to be okay; what new visually stunning images does Rodriguez and Belliaire have in store for us?

And yet, I suppose that is part and parcel with the nature of serialized comics.  The endings of a given issue are meant to leave the reader excited to pick up the next installment.  And to this extent, Ewing et al. have certainly fulfilled their job.

A touch unsatisfying, but visually stunning, curiosity piquing, and surely recommended.  Three out of Four Lockjaws.