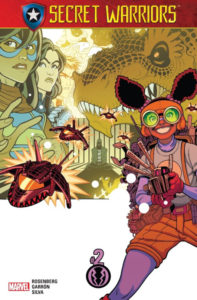 Daisy Johnson’s ragtag team of Inhuman heroes continue their battle against the evil Secret Empire in this second issue from the creative team of Mathew Rosenberg, Javier Garrón and Israel Silva.

The Secret Empire cross-over event is a rather grim tale.  With authoritarianism having become something so many of us have to deal with in real life, the idea of Hydra taking over America doesn’t exactly provide a sense of fantasy escapism.  And it is for this reason that I especially appreciate Rosenberg and Garrón et al.’s Secret Warriors.  It plays up the goofier aspects of Secret Empire and injects a much needed sense of humor to go with the pulse pounding action.  And while Secret Empire itself is rather dreary, Secret Warriors is hugely fun.

Just two issues in and Rosenberg and Garrón (along with colorist, Israel Silva) have achieved a really good synergy.  The script and art match each other quite well, with the funny sight-gags acting as punchlines to the pithy dialogue.  The team itself is made up of an oddly composed squad of misfits, yet Rosenberg and company have already got them feeling like a family (a family that constantly argues with one another, but a family nonetheless).

Whereas the first issue focused mostly on Daisy ‘Quake’ Johnson, this second issue is much more balanced.  Some extra space is offered to Inferno and the tale of how he ended up in Hydra’s custody.  Several flashbacks show Hydra’s take over of New Attilan.  The Inhumans never had a chance to fight back, most of their heavy hitters now off in space (as detailed in the pages of The Royals and Black Bolt).  Inferno, Naja and Grid flee, hoping to somehow get help so to eventually free the others.  Inferno is reluctant to hide and his rash, hotheaded actions ultimately leads to his colleagues getting captured.  Inferno himself is able to escape but it it clear that he feels a great deal of guilt over having left his friends behind.  He was later captured himself, which ultimately led to his being rescued by the others in the Secret Warriors #1.

Having busted up Hydra’s Inhuman internment camp, the Secret Warriors pile into a stolen car and head west under the assumption that doing so will eventually lead to crossing paths with The Mutants (who have in their possession the one Inhuman most critical to Karnak’s plan).  Moon Girl asks to drive…

Taking the back roads to avoid detection, the squad comes across a group of Hydra goons who appear to be accosting innocent civilians on a farm.  Daisy insists they continue on, but Inferno won’t have it; he pulls over and intercedes (and it later becomes clear that his motivation is to make amends for having left behind his teammates back when the Hydra takeover first went down).  It turns out that Daisy’s instinct were correct and the whole matter is actually a ploy to ensnarl our heroes, as The Warriors find themselves face to face with a brainwashed version of Shield’s monster unit, The Howling Commandos.

A wild battle ensues.  The Warriors are able to take down most of the commandos, but have much more trouble with the commandos’ clean-up hitter, Man-Thing.  Inferno tries to take on  the monster on his own, possibly looking to nobly sacrifice himself to allow the others to escape.  Fortunately, Karnak saves the day by plowing into Man-Thing with their car (so we can now assume that the ‘flaw’ in Man-Thing is the inability to hand;e the forward tork of a Volkswagen Golf GTI).

Having defeated the Howling Commandos, The Warriors pilfer a new car (this time with a horse trailer to hold Devil Dinosaur (sort of)) and continue west.  Moon Girl finally gets to drive and Karnak insists on listening to Beyoncé on repeat.  It isn’t lone before they find what they are looking for and are stopped by an interesting collection of X-Men who we can assume are the Mutants of Tian.  And it is with this cliffhanger that the issue ends.

The Secret Empire event in and of itself hasn’t been for me, but this tie-in series continues to be loads of fun; and this second issue is even better executed than the first.  Again the script and art pair really terrific together and Rosenberg’s wonderful knack for dialogue sells the idea of these disparate characters coming together to form a team.

While the team works together well in terms of telling a fun story, it’s clear they have a long, long ways to go before coming together as a cohesive unit.  Daisy is the de facto leader, but the others aren’t really following her lead.  It’s evident that the ideological differences between her and Ms. Marvel will be coming to a head rather soon.  Inferno has a chip on his shoulder and his impulsivity keeps getting him into trouble.  Moon Girl still doesn’t really know how to play well with others… she makes me think of an only child suddenly asked to get along with new siblings.  And Karnak, well it’s still not clear what Karnak’s motivations are other than he is happy to go wherever Moon Girl goes.  All of their interactions with each other are both satisfying while still leaving me wanting more and I’m very much looking forward to the next issue.