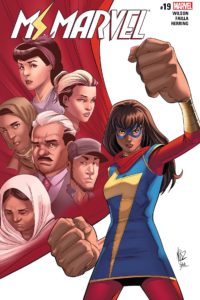 It’s the beginning of a brand new storyline in the pages of Ms. Marvel as illustrator, Marco Falla, joins G. Willow Wilson and Ian Herring for the start of an arc interestingly entitled ‘mecca.’

The tale begins with Kamala and her family preparing for their annual celebration of the first day of Eid Al-Adha.  Herein it’s shown that Aamir’s new bride, Tyesha is pregnant, meaning Kamala is to be an auntie in the not too distant future.  How exciting!

Yet the merriment is cut short when they return home to see their street partially cordoned off by barriers and signs reading ‘bring back the real Jersey City.’  It’s not clear what exactly is going on, but it certainly looks like trouble… it would seem that a tide of divisiveness has swept over the city.

The Khan family try not to let it all spoil their good time and continue on with their celebration.  Eid Al-Adha is the Festival of the Sacrifice and is a major holiday celebrated by Muslims all over the world.  The family prepare a huge feast for friends and family.  Kamala enjoys herself but cannot help but dwell on those disturbing signs and what exactly is going on with Jersey City.  Wanting to investigate the matter further, Kamala excuses herself saying she wants to take a walk after having eaten so much.  Her step-brother, Gabe, opts to go with her.
While on their walk, Kamala and Gabe are approached by two suspicious looking customers in matching uniforms who introduce themselves as agents of the ‘Keepers of Integration Normalization and Defense’ agency or KIND for short.  These KIND agents are patrolling the neighborhood to enforce behavioral norms.

The whole idea of it strikes Kamala as absurd and unconstitutional.  She states that Mayor Marchesi would never sanction such a thing.  The KIND agents inform her that Machesi has been unseated as mayor, fired by the city council in a closed session and replaced by Chuck Worthy.

Worthy is a Hydra agent and former underling of Dr. Faustus who had run for Mayor several issues back.  The KIND agents refute this idea that mayor Worthy is associated with Hydra, stating that the whole notion is merely a smear campaign orchestrated by his political enemies.

These agents add that they had been called to the neighborhood by citizens who had reported undocumented super-powered beings.  It all cuts Kamala like a knife.  The idea that her own neighbors would turn on her in this fashion is just crushing.

Kamala has seen this particular brand of authoritarianism before and feels confident she knows exactly who is behind it all.  She barges off intent on meeting the threat head on.

Having donned her Ms. Marvel outfit, Kamala arrives at the old detention facility that had once been run by the Carol Cadets back during the second superhero civil war.  Here she encounters ‘Basic’ Becky St. Jude.   Becky (who is now going by the name ‘Lockdown’) explains that she is no longer an outlaw, now she is the law.

She works for Mayor Worthy and has every legal right to enforce her authoritarian ways.  Indeed the tables have turned and now it is Ms. Marvel who is the one operating outside the law.  Lockdown has her minion, a villain named ‘Discord,’ attack Kamala.

This Discord appears to have some sort of electrical offensive powers, firing blast of energy at Ms. Marvel.  Kamala has been practicing her defensive dodges, utilizing her stretching powers to shift away from an attack in an efficient fashion.  At first she is quite excited that her practice has paid off and she is able to evade Discord’s attack with relative ease.

Yet Discord seems familiar with the particular limits of Ms. Marvel’s abilities; he changes up tactics and ensnares her with rings of electrical energy.   Such high voltage burst of energy is something Ms. Marvel is vulnerable to; and Discord is able to defeat her.

It seems as though the mysterious Discord fellow is someone Kamala has encountered before.  Trapped in those energy rings, she asks him who he is.  He replies that perhaps he’ll answer the question but first he has a question of his own… and asks about the time in which Ms. Marvel fought against Chuck Worthy’s downtown development plan.  Discord asks Kamala what she saw when she first arrived on the scene?  It takes her a minute, but then it dawns on her that despite the clearly evil intensions of Worthy’s plan, there were indeed quite a few people there supporting him.  At the time, she just shrugged them off as easily manipulated stooges, but now she’s forced to realize that they were real people, people with real feelings and real concerns.

Worthy was offering totalitarianism in exchange to keeping them safe.  Ms. Marvel fight against it because, to her, such a bargain is evil and unAmerican.  Yet it nerve quite dawned on her that there were a lot of people who felt the opposite, who very much wanted what Worthy was offering… and she disregarded them merely because she believed she was right, that she knew better.
And then Discord knocks her out.

Meanwhile, Gabe rushes back home and alerts the others that there are these creepy KIND agents out there enforcing social norms and rounding up super powered beings.  Zoe has been the Khan’s guest for the Eid Al-Adha festivities.  She interrupts Gabe, expressing a fearful dismay that government agents are out there rounding up illegal immigrants!   Embarrassed by her outburst, Zoe explains that she was actually born in France and has never actually gone about naturalizing her citizenship.

Aamir brushes off Gabe’s concern.  The family are all law abiding citizens and should have nothing to fear.  Mrs. Khan asks Aamir to bring the leftovers of their feast to a family down the street.  He complies, but on his way there is accounted by the KIND agents.  These agents identify Aamir as being an undocumented super-powered being.  Amir laughs it off.  He had only possessed powers for a short while, the results of an accident that have long since worn off.  The agents are unmoved by his explanation and haul him off to be processed, detained and who knows what else.  And it is with this harrowing turn of events that the issue ends with he promise of continuation in the next installment.

Anyone expecting a lighter toned story-arc following the rather heavy DocX saga is sure to be surprised.  Wilson’s scripts just do not shy away from the important topics of the day, and ‘Mecca’ may very well be Ms. Marvel’s most pressing and germane tale to date.

The gag where Zoe assumes the KIND agents are out rounding up undocumented immigrants made for funny bit, but also acted to underscore the metaphorical valance of the issue.  ‘Super powered beings’ in the issue is rather clearly just a stand-in for immigrants, specifically immigrants who are Muslim.

The trump Administration’s so-called ‘travel ban’ has just recently been once more struck down by the ninth circuit court of appeals.  It’s now being fast-tracked to the Supreme Court.  This travel band is very much a poorly veiled Muslim ban and is as unconstitutional as it gets; yet there is still a chance that the Supreme Court will uphold presidential authority over immigration and allow the ban to go into effect.  A daunting, horrifying prospect.
The constitutionality and amorality of such a ban notwithstanding, there is the simple truth that there is a sizable portion of the American public who would very much like to see it enacted.  The specter of terrorism has created an irrational fear toward people who are Muslim.  And many are quite will to give up civil liberties to take actions that they believe will better ensure their safety.  I don’t agree with them, but it is folly to just see them as an uninformed rabble.  They are real people with real feelings.

Kamala is used to being loved.  She’s plucky and cheerful and wonderfully inspiring in her unwavering idealism.  It is surprising and terribly dismaying for her to realize that there are many people out there who fear her, who would feel much safer were she gone.  And this extends to the real world as well.  Ms. Marvel bursted onto the scene and was an immediate hit.  She was celebrated as the first major Muslim superhero and that, coupled with the amazingly high quality of her comic, made her an absolute darling of the progressive left.  Yet times have changed and the shift in political atmosphere in the states has very much emboldened people who have attitudes to the contrary to speak their minds.  And as one of the more visible Muslim characters of popular culture, Ms. Marvel (and her creators) has become the focus of a great deal of vicious and intolerant animus.

Some may feel that it is inappropriate for G. Willow Wilson to incorporate all of this into once of her comics.  Who may think it better to keep comic books apolitical and just a man of escapism.  Yet I don’t blame her in the least.  How can she not think about things, not want to try to process and digest it all in her art?  Life and art always imitate one another, there’s really no way around it.

I’m curious about the story-arc being entitled ‘Mecca.’  Mecca with a capital ‘M’ is the capital of Hejaz, Saudi Arabia, the birthplace of The Prophet Muhammad and spiritual center of Islam.  Mecca with a lower case ‘M’ however can colloquially by used as any place in which a person very much wants to go, an idealized location.  The font utilized write out ‘Mecca’ at the beginning of the issue makes it impossible to tell if it is being written with an upper or lower case ‘M.’  It makes for a very intriguing ambiguity…

Recommended.  Four out of Five Lockjaws.