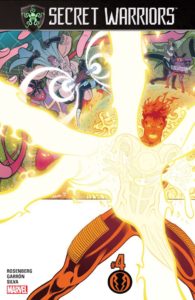 It’s the next installment of the Secret Warriors; from the creative team of Mathew Rosenberg, Javier Garrón and Israel Silva.

Hydra has taken over much of the United States and Daisy ‘Quake’ Johnson and her ragtag team of Inhumans are doing their best to defeat this fascist regime and makes things right.  Their plan centers on locating a mysterious Inhuman named ‘Leer’ whom Karnak seems certain is pivotal to uprooting Hydra.  Who Leer is and why Karnak appears so sure he or she is central to their plan remains unknown.

The Warriors had traveled to the Mutant occupied territory of Tian in search of Leer.  Following a brief skirmish with a group of former X-Men, they were told Leer had been taken by Hydra.  The Warriors headed back east and were quickly assaulted by a battalion of Hydra soldiers led by Daisy’s evil father, the super villain known as Mr. Hyde.

Hyde’s forces include The Vision and Scarlet Witch (both under some form of mind control forcing them to align with Hydra) as well as Deadpool and Taskmaster.  The Warriors are very much outmatched, but Daisy is unwilling to surrender to her dastardly father.   A battle breaks out and The Warriors fair quite poorly.

The Scarlet Witch makes short work of Ms. Marvel; likewise Inferno is quickly defeated by The Vision.  Karnak holds his own against Taskmaster, but is felled once The Scarlet Witch intervenes.  Moon Girl fairs much better against Deadpool, kicking the merc with a mouth right in the groin, distracting him long enough for Devil Dinosaur to gobble him up with his massive jaws.

Daisy and Hyde fight each other, yet their battle is interrupted when Hyde orders his soldiers to open fire on Devil Dinosaur.  Fearing for her friend’s life, Moon Girl quickly shouts that they all surrender.  Daisy is angered; she doesn’t wish to give up, she wants to go down fighting.  There’s a sad desperation to Daisy, as though she has lost hope and would rather die free than become a prisoner of Hydra and her father.  Moon Girl hasn’t lost this hope, there is still too many things dear to her that she is unwilling to risk.   The threat of Devil Dinosaur being killed is enough to get her to surrender.   Daisy begrudgingly concedes and is quickly taken out by Taskmaster and The Scarlet Witch.

The team is imprisoned aboard a Hydra Hellicarrier, heading back toward central command located at Washington, DC.  Daisy and her father continue their spiteful banter with one another.  Hyde knows what the Warriors have been up to, that they have been seeking out the Inhuman named Leer; and he knows that his daughter is unaware of who Leer is and what exactly he or she can do.  He suggests that Daisy is simply looking for a reason to fight, a target to focus on in her quasi-suicidal intention to go down fighting.

Hyde slaps his daughter across the face when she barks back that she has no idea what he’s going on about.  Slapping Daisy like that elicits a rage in her that manifests in the whole hellicarrier beginning to tremor and shake.  Hyde is puzzled by it all; he had mistakenly assumed that his daughter required her specialized gauntlets to use her powers.  He had these gauntlets removed and believed Daisy to be incapacitated.  For all of his alleged intellect, Hyde did not realize that his daughter uses the gauntlets simply to focus her powers; that she is far from debilitated without them.  A sinister grin cuts across Daisy’s mouth… perhaps she is as self-destructive as her father suggests fore she is clearly intent on using her defused powers to bring this craft down.

A Hydra goon comes racing in beaconing Hyde back to the bridge, yelling that the ship is quickly being shaken apart.   Hyde leaves his prisoners to attend to the matter.

Meanwhile, Moon Girl had utilized her magnetic boots to furtively pickpocket a canister of nitroglycerin from Deadpool’s utility belt.   She uses the nitro to free herself from her restraints and then goes about freeing Daisy and the others.  They all rush to find some means of escaping the doomed hellicarrier, yet Moon Girl falls back.  Devil Dinosaur is being held elsewhere on the craft and she’s not leaving without him.  Daisy argues that there’s no time, that they have to leave him behind, but Moon Girl refuses.  They get separated by the falling debris and Moon Girl heads off on her own in search of her friend.

Moon Girl eventually comes across Devil Dino, whose being kept in the hull near a communications console.  She knocks out a Hydra goon manning the console and then uses the radio to send out an all-points SOS, asking for help from anyone who may be listening.

Elsewhere, the Hydra agents have fled the crashing helicarier taking all of the life pods leaving none for The Warriors.  Daisy has no plan as to how to escape and seems resigned to her fate.  Just when it seems that all hope is lost, Archangel and Sunfire of the X-Men come swooping onto the scene.  They had heard Moon Girl’s distress call and have come to help.

Yet there are only the two of them and each can only carry two apiece to safety.  Daisy insists that wait for Moon Girl, yet there isn’t any time.  They have to leave now or go down with the ship.

Back int he hull, Moon Girl races to free Devil Dinosaur from his restraints.  A little boy with red hair comes walking up and tells Lunella that her efforts are pointless,  Lunella asks who this kid is and he introduces himself as Leer.  Hey, this is the guy they’ve been looking!  Moon Girl demands he use his powers to help, yet Leer replies that he doesn’t have any powers.  Moon Girl doesn’t have the time to be confused by it all and goes back to trying to free Devil D.

Just then a shadowy figure comes from behind Moon Girl and knocks her out.

The others have finally accepted Archangel and Sunfire’s aide and have flown safely down to the surface.  They can only look on in horror as the helicarrier crashes in a massive fireball and it appears as though Moon Girl has perished.  And it is with this cliffhanger that the issue comes to an end, with the promise of continuation in the next installment.

As has been the case with the previous issues of Secret Warriors, the story is inter-spliced with flashback scenes of the recent past, showing how each of the characters composing the team dealt with the Hydra take-over.  This issue focuses on Moon Girl.  The first wave of Hydra’s attack involved an army of super villains laying siege to Manhattan.  Lunella sneaks off from her family’s apartment to go get Devil Dinosaur and join the battle against these villains.  The duo manage to save a group of civilians from the villains, but are ultimately chased off.  Devil Dinosaur appears to possess some kind of sixth sense… he seems to realize that the entire island of Manhattan is about to be closed off in an impenetrable dome of DarkForce energy.  He races off with Moon Girl in tow and jumps into the Hudson Bay… just in time escape being trapped within the dome.  Shocked by the turn of events, Moon Girl has Devil D swim them over to Jersey, which explains how she ended up with Ms. marvel as entailed in the first issue.

The issue is another intense and wild ride and Rosenberg’s script continues to do a very neat job of interjecting moments of levity to balance out the very grim tenner of the narrative.  Daisy’s reaction to the return of  the f–ing X-Men was a laugh out loud moment.

While Moon Girl was in some ways the star of this latest issue, the series as a whole continues to be centered on Daisy with the rest of the cast acting as foils to her emotional journey of dealing with all that’s happened.  Last issue saw daisy and Ms. Marvel butting heads over bending one’s morals in the midst of war; whereas this issue saw a conflict between Daisy and Moon Girl regarding putting companionship over the needs of the mission.  On two occasions during the issue, Daisy showed relative dispassion over the welfare of Devil Dinosaur… a willingness to sacrifice him in order not to give up.  Perhaps Daisy sees Devil D as little more than an animal, Moon Girl’s pet whose life isn’t as important as the others.  It’s a good deal out of line with Daisy’s normal sense of character, yet it would seem that her anger and desperation has overwhelmed her and clouded her judgement.

Daisy has been very much traumatized by all that has happened.  Her world has been turned upside down and she saw her friends and teammates, people whose lives she was responsible for, die in front of her eyes.  It has left her myopic, fixed with a tunnel vision to fight back almost blindly.  Her father might be correct that there is a degree of self destructiveness to it all.  All is lost and she has become resigned to go down fighting.

The sense of hopelessness that Daisy seems to feel is contrasted by Moon Girl.  Lunella is extremely intelligent, yet she is still only a child and possesses a childlike naiveté that helps her resist seeing their situation as a lost cause.  The whole dire affair of the Secret Empire story will be resolved, but it will be resolved in the pages of the main Secret Empire book.  The Secret Warriors have never really had a chance to save the day.  They have just been blindly following Daisy’s lead because it offered them hope.  Daisy hasn’t shared in this hope, but has herself blindly followed Karnak’s suggestion that locating Leer might bring about some miraculous resolution.   She doesn’t have any real faith in Karnak’s plan, it is simply a better option than lying down and letting the villains win.

Despite the snappy patter and the comedic aspect of Garrón’s terrific illustration, there is a rather cold pessimism at the heart of this issue.  I’m guessing it will prove to be the nadir of the arc, the point where things are at their bleakest before hope reemerges.

I would feel disappointed that the other characters have been little more than window dressing to    Daisy’s development if not for that fact that Rosenberg is doing such a good job of it.  Daisy was left in something of a limbo after the conclusion of Hickman’s run on the first Secret Warriors.  She showed up here and there, but was mostly relegated to sidekick status.  Chloe Bennet’s terrific performance as Daisy on the Agents of Shield television show has further muddled who the 616 version of Daisy is… as parts of the MCU Daisy got superimposed onto her 616 analog.  This new iteration of Secret Warriors has been intent on bringing Daisy’s character back to the forefront, putting meat back on the bones and forging Daisy as a fully dimensional character in her own right, distinct from her MCU counterpart.

Another highly recommended installment.  Four out of Five Lockjaws.