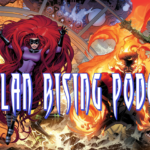 Seren, Doc and Adam discuss the 6th instalment of the Inhumans tv. There are a couple of tangents in this episode, but feel free to contact the show: theshow@attilanrising.com or twitter: @attilanrising1

Just Adam and Doc again this week! We discuss and give a run down of the 5th Episode of the Inhumans TV show – named “Something Inhuman this way Comes”. Unfortunately Seren couldn’t be with us in this episode, hopefully we keep the ball rolling though. You can contact the show at our email address: theshow@attilanrising.com or our Twitter: @attilanrising1

This episode is a review of the fourth episode of the ABC TV Show The Inhumans. Seren, Doc and Adam the main plot, our genuine opinions on the show as well as where we see it headed and most of all – our favourite bits. We do add a little at the end talking about the Agents of Shield news that came out today as well. Contact us on twitter @AttilanRising1 or email us theshow@attilanrising.com

In this episode Seren, Doc and Adam talk about Seren’s trip to NYCC, getting up to date on the most recent comicbook developments (including that scene in Royals #8), chat about Moon Girl and Devil Dinosaur and of course Black Bolt #6

This episode is a review of the third episode of the ABC TV Show The Inhumans. Doc and Adam discuss the plot, how we feel the show is going as well as some plot points that need clarifying of touching on any theories that either of us may have. We also talk about the news coming from NYCC about Season 5 of Agents of Shield. Contact us on twitter @AttilanRising1 or email us theshow@attilanrising.com

This episode is a review of the first two episodes of the ABC TV Show The Inhumans. We discuss the plot, what the IMAX release missed and how we feel the show is going as well as how the future of it could have been affected by it’s negative reviews. Contact us on twitter @AttilanRising1 or email us theshow@attilanrising.com

Episode 26! Seren, Doc and Adam talk about all the recent releases Ms Marvel 22, Secret Warriors 6, Black Bolt 5, Royals 7 and Once & Future Kings 2. As well as a quick discussion about the TV Show Episode Titles and their references to the comicbooks. Contact us on twitter @AttilanRising1 or email us theshow@attilanrising.com

Let’s be honest, if you’re not a dog lover, Black Bolt #5 might not be as “full of feels” as it was for me. In #5 it just shows why people love their dogs too – in fact, why we love all animals in general. It was full of pretty pictures, doggos and general love – which is what all I have for this creative team (including Frazer Irving this issue!).

This issue starts out with the wonderful Frazer Irving’s art – telling the story of Black Bolt and Lockjaw’s friendship, from when Black Bolt was a little baby to where we recently saw him in Inhumans Prime. You see Lockjaw (sadly) outliving his mother, developing a relationship with our King Black Bolt.

After this we return to the main story that we’ve been treated to over the past few months, Lockjaw just saved Black Bolt from his cell. Realising what this prison is, who made it you get a sense of what Lockjaw means to Black Bolt. Like many people, what their dog means to them – his oldest friend. It’s really, really sweet, and I love it.

But equally, you see Black Bolt contemplate what to do next – return to his family? Or return to the prison which held him captive, but what unfolds in his mind genuinely made me happy. Saladin is a fantastic writer, and he definitely knows how to write the Inhumans – Medusa is stated as being able to handle Maximus, of course we know this but it’s just nice that even when not in this book she’s being written as a strong woman – it’s only a single sentence but it’s another thing that made me smile, I wonder if Saladin would write a Medusa solo?

What I love next about this book is that it shows the Black Bolt has developed real feelings and connections to these people who aren’t his family. I’m not saying he’s completely Inhuman – but he does value family above all else, and so he goes back into the Prison.

The to-and-fro between Blackagar and Creel is nice, Creel regaining his powers and Black Bolt genuinely pleased to be back with his pal. Creel introducing himself to the “Space Mutt” is also sweet. Because Lockjaw.

The next few pages are dedicated to them finding Blinky, Molyb and Raava, for tonight – it seems like there is going to be a jailbreak. They end up having a few really cool action pages when they break into the Jailer’s Chamber, they get attacked by what I can only describe as Eye-Bats. 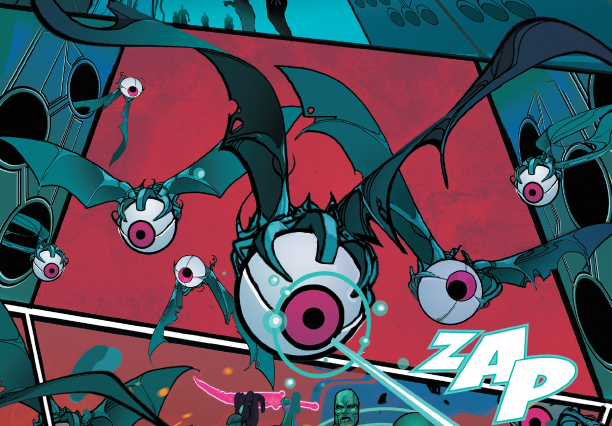 That’s where I got hit in the feels.

Lockjaw gets hit by an escaping Spyder, and lets be honest – Black Bolt’s response is what all of us would do. Completely decimate the person hurting our dog. He’s still breathing though (Lockjaw, not Spyder).

Our heroes finally reach the Jailer’s chamber and honestly, it’s not what I expected. It’s lots of monitors, lots of technology, and what appears to be a film of the Jailer when he was a prisoner himself – having a power that feeds off of other psychically, and it appears he’s been using his power for centuries – driving him mad.

The next page shows something strange happening – the Jailer seemingly setting a trap. It looks like those who have died by Black Bolt’s hands are appearing in front of him, angry and making Black Bolt afraid. It ends, leaving us eagerly anticipating #6.

Both the art and the story in this book are amazing, quite frankly, my favourite writers and artists at Marvel are those who have done wacky things, or their art is just really “out there”. I’ve spoken about it plenty of times on the Podcast. Christian Ward’s art is so space-y, it just works. What I really love is just the colour palette that he’s used, it’s dark, mysterious and just perfect for the story. Christian just seems to put mountains and mountains of effort into these pages – (also go follow him on twitter @cjwardart) honestly, Ward is (in my opinion) the absolute best choice of artist for this story, and he continues to show that.

In a similar vein, Saladin Ahmed is the best choice of writer for this story. In my opinion it doesn’t read like what Marvel are currently pushing out, it reads like a story that you can really get involved with and attached to. Whilst some comics are more of a read once and not read again for half a decade, this one will keep drawing me back again and again. Maybe it’s because there are elements that just make it so human? It’s sort of how I felt about Guardians of the Galaxy Vol 2. It’s a great story, and just makes you want to read/see more because you do get invested. I can really get behind the idea of prose novelists coming to Marvel and writing a comic, it just works really well.

Frazer Irving on this issue also really compliments both Christian and Saladin, the art is (again) “out there” and really different from what you traditionally see in comics at the moment, maybe I just like funky art – but it works well. Frazer Irving is also a really nice guy, so I urge you to go follow him on Twitter too

And finally, that Lockjaw story! Frankly, it was amazing to see, does it finally solve the debate of whether Lockjaw was an Inhuman or Dog beforehand? Or does it just beg the question, “Was Lockjaw’s mother an Inhuman or Dog prior to Terrigenisis?”. 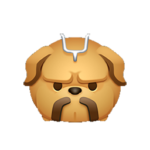 In this episode we review not only the most recent comics, Royals 6 and Moon Girl 22, we review the last year of our Podcast – highs and lows as well as what we have thought of the recent changes in writership and what the likes of Charles Soule and James Asmus bought to the Inhumans. Also – we review the cinematic Episodes of The Inhumans TV show.

In this Episode Seren, Doc and Adam chat about the comics released so far this month. Things get particularly deep talking about Ms Marvel as they always seem too, Secret Warriors discusses that jaw dropping moment and we finally take a look into Once and Future Kings – the most recent take on the Black Bolt, Maximus and the Inhumans origin story. Contact us: theshow@attilanrising.com Twitter: @attilanrising1