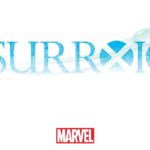 As we’ve discussed on the Podcast previously “Resurrexion” is Marvel’s new initiative starting in March for both the Inhumans and X-Men, post IvX. It’s something that I’m really looking forward to, and I’m sure Seren and Doc would share my view.

But, I’m going to be honest with you – X-Men were always my first love, so IvX is a little bittersweet for me because it’s my favourite characters going head to head. It’s funny, I see my comicbook taste similarly to my music taste, what I listened to in 2007 is different to what I listen to now in 2017, this is similar to how my favourites have changed since I picked up my first comic in 2012 (largely X-Men and Avengers, now it’s X-Men and Inhumans).

But rather than drift to the past where your eyes fill with nostalgic weeping and rose tinted spectacles, I want to focus on March 2017. Namely the following books: 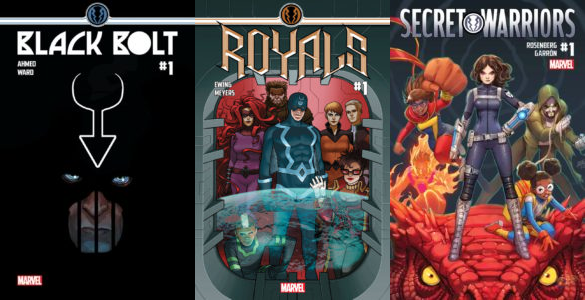 Let us start with Hopes.

I hope these books are going to be good. In fact, I have no doubt these books will be good. Black Bolt has a really interesting premise, stuck in an Intergalactic Prison makes me reminisce of the Prison in Guardians of the Galaxy Movie which was hilarious. But on a serious note, what will he be in there for? Will we see him arrested by someone at the end of IvX? Is it something to do with the Kree? Will it even be set “now”? There are a lot more questions than answers so far coming from Saladin Ahmed’s fairly vague premise.

But answer me this, the odd pairing of Black Bolt and Absorbing Man Aka Carl “Crusher” Creel, who doesn’t want to see that?! But also, Saladin Ahmed has said that he intends it on being a story great for new readers, and quite honestly that’s what I want from a story. I want Inhumans to gain in popularity, and I want great stories and I want Inhumans to become mainstream. Sorry, I think I drifted into “Wants” a little there.

I think my biggest hope is just good stories. That’s all, yes I suppose the capitalist in me wants them to make lots of money so Marvel can see that they’re viable characters and continue to deserve the spotlight they’re getting currently, because since Infinity in 2013, I have been hooked. Not only that, if there weren’t any Inhumans books, what would we have to talk about?

So, I’m going to follow that enigmatic sentence with a list of my wants. Firstly, lots of Black Bolt – if you’re a listener of the show you’ll have heard me saying that Black Bolt is my favourite Inhuman. So really, I want to see lots of Black Bolt, is that selfish? Probably, especially when there are lots of other incredibly cool and popular NuHumans out there like Reader and Patchwork-Auran alongside Frank McGee (that would be an awesome ongoing, right?). But this is probably the easiest of my “wants” because it looks like it’s coming to fruition, with Black Bolt featuring in promos for both Black Bolt ongoing and the Royals team book, it’s hard to not see this one being fulfilled.

The second want… I guess it’s the Inhumans to be seen as a legitimate Marvel property. I’m not talking about Marvel themselves, because quite frankly they’re doing an excellent job with all things Inhumans at the moment, please keep going with it! It’s with certain fans. Again it’s something that has been mentioned in the Podcasts, there are a some fans out there that are under the impression that Inhumans are a stand in whilst Fox have X-Men rights. I disagree and have my own theory, but I’ll likely talk about this at some point in the future, but I just want these certain fans that you can have X-Men and Inhumans active within the same Comic-verse. You can have both NuHumans and new Mutants popping up (even if it is eventually and post IvX). Why can’t they live happily together?

My second want is a bit harder to fulfill completely, because there is always going to be someone of the opinion that Inhumans are taking some sort of X-Men glory. But I for one, love good stories and will continue to support both franchises. But I’m absolutely sure that Inhumans will continue long into the future at Marvel!

My third and final want is for the solo books of Ms Marvel, Moon Girl and Mosaic to continue. They’ve all been fantastic in their own right, Kamala Khan is a really great character. Moon Girl again, superb character, amazing writing and just great fun. Mosaic is a book I’ve also been enjoying, it’s been a great set up, and quite honestly Mosaic is the kind of character that you can ultimately empathise with – even if he is a millionaire basketball player.

To the future then…

The future isn’t clear to anyone, I don’t want to sound like some sort of clairvoyant or whatever but I do think that good things lie ahead for Inhumans. I hope to see more characters appear down the line, both old and new. Quite honestly, I’m enjoying the current Marvel Status Quo, long may it continue. I think I’ve more than covered the points I want to see, but I would also like to see more books, is that greedy and selfish of me? Maybe. But I think ultimately, having a wide and varied amount of books to appeal to different people, like Marvel have so well done with Moon Girl and Devil Dinosaur, Ms Marvel and Mosaic (making them appeal to kids, teens and adults; males and females) – that has been exciting.

So, if I sign this off with one thing. It’s this; It’s a great time to be an Inhumans fan, lots of stuff to look forward to and ultimately, enjoy reading. 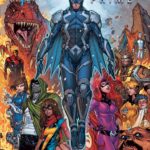 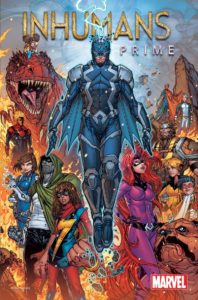